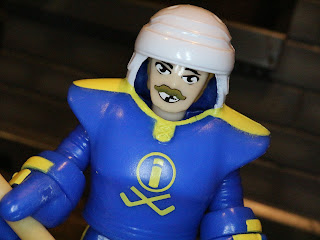 I'm not much of a sports fan other than watching professional wrestling so I'm not the biggest fan of the sports themed figures in the Imaginext Collectible Figures series. Today I'm checking out the Hockey Player whom I'm sure some people will dig. To be honest, if I had to watch one sport other than wrestling, it probably would be hockey. Still, I'm not incredibly thrilled by this guy but when you'e buying blind bags (well, semi-blind with Imaginext- figures are numbered so you know you're not getting duplicates, which is nice) sometimes you get figures you are less than thrilled with. Let's check out the Hockey Player after the break... 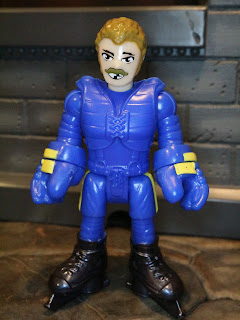 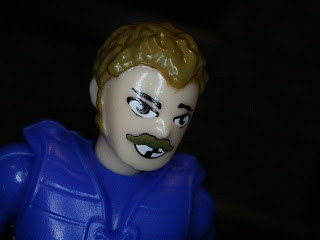 * The headsculpt is going on. The Hockey Player kind of has a curly, 1970s sideburns and hairstyle going on. Especially with the stache he's rocking. He kind of looks like Ron Burgundy. The expression is slick and I like the inclusion of the missing teeth in his grin. 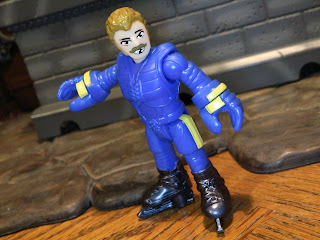 * Like most other Imaginext figures, the Hockey Player is solid, durable, and features the full articulation model for the line. He's also taller than the other figures, too, because he is wearing ice skates. To be honest, that's a very cool detail. 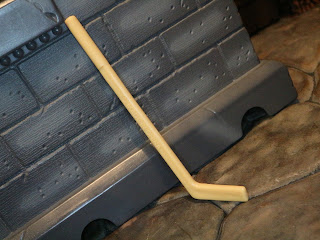 * The Hockey Player's hockey stick is a cool accessories. It's simple but very recognizable. I like the wood coloring of the plastic. * The Hockey Player has some great detail but there is no paintwork on his torso to bring out those details. It makes him seem kind of dull. 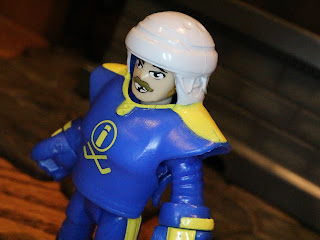 * The Hockey Player's hockey pads and helmet are all one piece but they look oversized and misshapen. This series really seems to have had a problem in creating nice looking "armor" overlays for the figures. Not sure what's going on here but hopefully it gets fixed in the future. 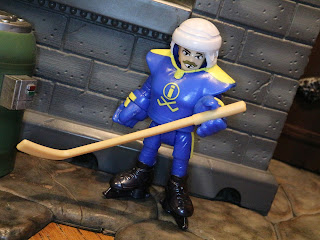 The Hockey Player is an Eh and a 1/2 figure. There's nothing really wrong with him but he's just not terribly exciting to me. The skates, hockey stick, and headsculpt are cool but the uniform is pretty dull. Series 10 has a few cool standout figures but this one isn't one of mine.