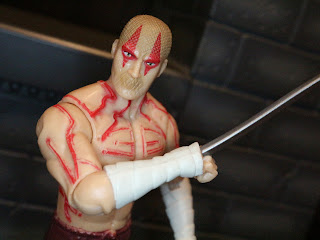 Since Deadpool won the April 2018 slot in my now coveted series of monthly review spotlights he is getting a special review every Saturday! Today I'm checking out what is possibly the most bizarre Deadpool figure ever released: Deadpool as Weapon XI from 2009's X-Men Origins: Wolverine action figure tie-in line. In 2009, possibly due to then current popularity of 1/18th scale lines like Star Wars and G.I. Joe and and due to the recent economic slump, Hasbro went with a 1/18th scale approach for the Marvel license with the release of Marvel Universe. While long time Marvel Legends collectors were bummed, 1/18th scale collectors rejoiced. The 1/18th scale focus for Marvel has certainly waned in recent years (although it is still around) in favor of the traditional 6-7inch Marvel Legends scale. At the time all of the Marvel movie lines were also released in 1/18th scale including the X-Men Origins: Wolverine line. I like the movie but over the years it certainly has received quite a bit of hate due to some of the bizarre choices made for the film. It definitely falls under the old comic book movie rules of taking popular comic characters and attempting to make them less "comic booky," thus why we have a version of Deadpool that looks nothing like the Deadpool we know and love. Ryan Reynolds did play Wade Wilson in the film but a major plot point is that Wade goes through a similar mutant making process to turn him into Weapon XI, "the pool, the mutant killer: Deadpool." Given multiple mutant powers (teleportation, the ability to shoot optic beams, and katanas embedded in his arms) and inexplicably having his mouth sewn shut, the Merc with a Mouth was treated pretty strangely in the film. The action figure released alongside of the film mimics the bizarre film look but, as a toy, it turned out to be pretty cool. Let's check him out after the break... 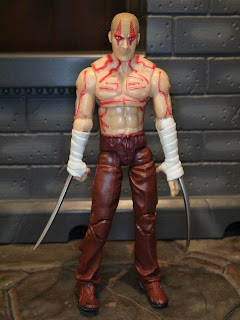 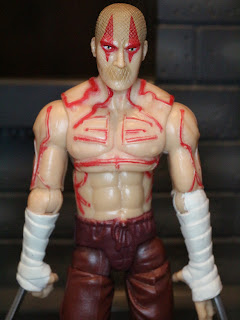 
* If you can accept that this is a radically different version of Deadpool (or just pretend that it's just a completely different character) than the figure is actually kind of cool. While the movie seemed to have various drawings made on it to imply where surgical procedures were supposed to happen, the figures red markings look more like tattoos. It's not Deadpool but it is an interesting design nonetheless. 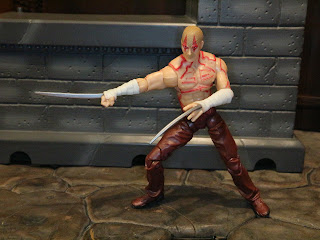 * The articulation is pretty good and allows for some fun poses. The Marvel Universe figures were fantastically playable and Deadpool features some great joints with a solid range of motion. 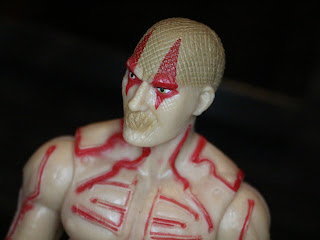 * I like the headsculpt. Again, not Deadpool, but you can see the Ryan Reynolds likeness underneath a bizarre shaved head (with some weird texture), the red eye tattoos, and the surgically closed mouth. It's solid work by Hasbro during a time when they were masters of the 1/18th scale. 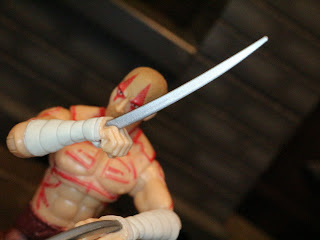 * Often dubbed BarakaPool, Weapon XI has massive katanas that come out of his arms, kind of like Wolverine's claws. Now I have no idea how they would actually fit in there but that's a problem for a different day. These look very cool and are molded in a plastic that is neither too rubbery nor too firm where breakage is a problem. 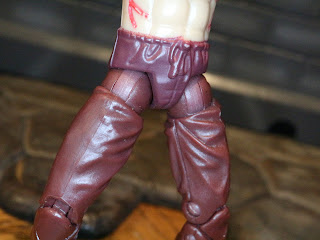 
* Hasbro used these bizarre swivel/hinge joints with a thigh swivel attached too. They're kind of awkward and feel really, really loose. Sometimes it is hard to get Deadpool/Not Deadpool to stand up. 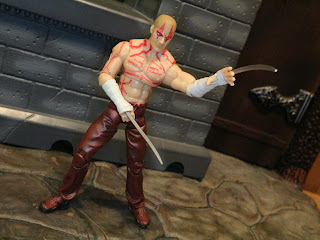 Whether you tolerate this rendition of Deadpool or loathe it, there still are a few reasons to appreciate it. First, Hasbro made a Good toy that's kind of fun to play with or use as a bizarre Cobra experiment. Second, Ryan Reynolds was able to take this role and use it to campaign for the Deadpool movie we all wanted and deserved. Lastly, this figure makes a cameo in Deadpool so it's kind of like a prop-replica from that film, isn't it? Despite people disliking this figure he's began to surge in price, so get him while the getting is good if you want him!


If you're looking for more Deadpool reviews I've also checked out Mezco's One:12 Collective Deadpool and the Toy Biz X-Men: X-Force Deadpool.