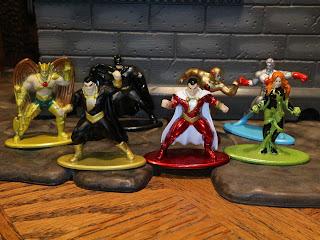 It has taken me a bit but I've finally picked up some more of the 3rd series DC Nano Metalfigs from Jada Toys. Back at the end of February I found the 5-packs but just recently I came into the newest 10-Pack Figure Collector's Set and a few of the series 3 single packed figures. Interestingly enough, folks have just started finding the fourth series of single packs (which includes Batwoman, Bane, and Deadshot!) so it seems like Jada Toys is having a lot of success with this line. Like with most of the multi-packs you will end up with some duplicates but at the lower price of this line (about a dollar or less per figure) it's a bit more manageable to handle duplicates. My daughter like to collect these too, so I give her my duplicates. Let's take a closer at this 10-pack which includes three exclusive figures: Shazam!, Black Adam, and Captain Atom... 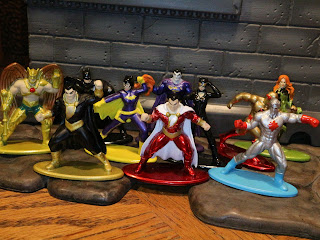 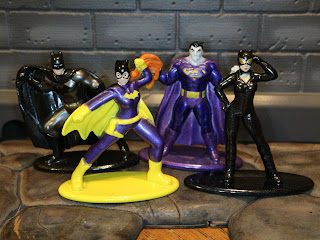 If you're trying to pick up one of every figure in the collection you're going to end up with some duplicates. Batman DC39, Batgirl, and Catwoman come packaged in the series 3 5-Pack A while Bizarro is included in series 3 5-Pack B. They're all solid figures but you can check out those reviews for my thoughts on them. 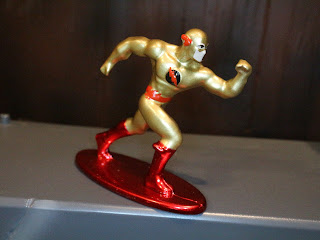 Jada Toys does offer some repaints from time to time but turning the DC22 Flash into the Reverse Flash is a pretty cool idea. The Flash is one of my favorite sculpts in the line and the Reverse Flash takes that dynamic, running pose and gives it the very cool Reverse Flash paintjob. I'm digging it, especially the nifty red and black lighting bolt logo on the chest.  Reverse Flash is also offered as a single packed figure in Series 3. 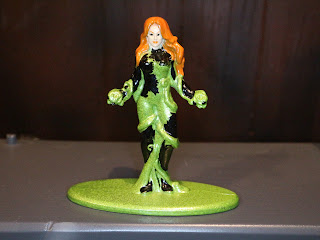 As a Batman fan I'm pretty happy that Jada Toys is putting out a great roster of Gothamites in this line. I'm really excited to see Poison Ivy out so early, particularly in her very cool New 52 outfit. It took me a bit to get used to this look but I really love Poison Ivy's black and green outfit. It's very cool and Jada Toys did a nice job of capturing the various vines and creepers surrounding Ivy. The paintwork seems greatly improved on this series. Poison Ivy is also offered as a single packed figure. 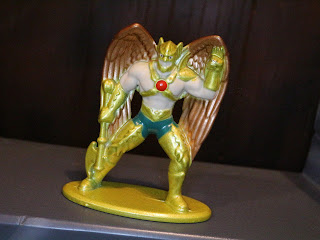 Hawkman is another series 3 figure that is also available single packed. He's based on Hawkman's New 52 look which isn't my favorite look for the character but that doesn't mean that Jada Toys didn't do a terrific job. The metallic paint work looks awesome here on Katar Hol's armor, wings, and axe. Fun Fact: Either the Super Powers Hawkman or the Flash was probably the first DC Comics figure I ever owned! 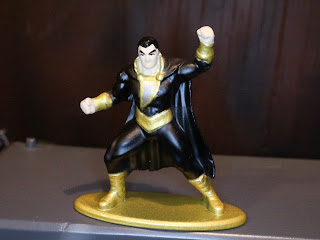 Now we get to an exclusive for this set: Black Adam! While I love Gotham based figures and the Justice League, I definitely like that Jada Toys is willing to go a bit deeper into the DC Universe than some companies typically get. Black Adam's gold and black color scheme works excellently here and everything is very neat and clean. The lightning bolt on his chest is fantastic for the small scale. 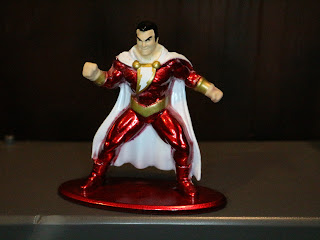 The second exclusive pairs perfectly with Black Adam: Shazam! With the wisdom of Solomon, the strength of Hercules, the stamina of Atlas, the power of Zeus, the courage of Achilles, and the speed of Mercury, young Billy Batson is now rocking my Nano Metalfigs collection. The metallic paintwork is excellent here, too, and really adds to the character's aesthetic. That's a pretty solid likeness of Shazam!, too! 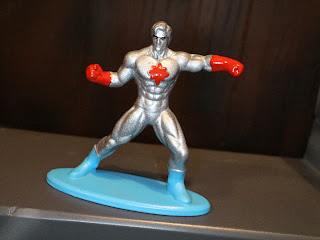 Another former Charlton Comics character along with Shazam!, Captain Atom is a great character who also fits perfectly with the die-cast metal makeup of these figures. This is my favorite Captain Atom look and Jada Toys nailed it. The simple outfit looks perfect here and the punching pose makes for a fun display. 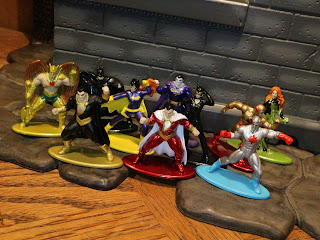 These are some of my favorite DC collectibles out on the market. Besides the fact that they're die-cast metal minifigures with great paintjobs, I also love Jada Toys' character selection. There is a great mixture of A, B, and even a few possibly C-list characters all mixed together. The price is a steal, too. I do wish that the sets didn't have so many duplicates (alternate paintjobs would be so much better) but it's tough to argue with getting 10 solid metal minifigures for $10 bucks. This is a Great and a 1/2 set and one of my favorites from DC Nano Metalfigs.

I've reviewed so many Batgirl toys that she has her own review gallery. Check out the Batgirl Library for more Batgirl reviews!

I've also reviewed so many Batman figures that he has his own review archive. Check out the Dark Knight Gallery for more Batman reviews!

I have also reviewed two other Reverse Flash/ Zoom figures before: The CW Reverse Flash from the DC Comics Multiverse line and the Mezco One:12 Collective Zoom.

These are the first figures of Bizarro, Black Adam, Captain Atom, and Hawkman I've reviewed on Action Figure Barbecue.