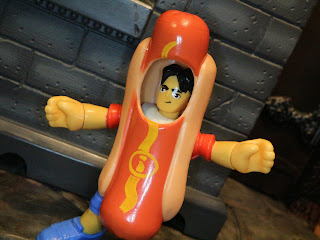 I still have one more of the Imaginext Series 10 figures I picked up a few weeks ago just setting around so I might as well review it, right? While series 10 doesn't really have one "must have" figure in it, the figure I definitely was the most aware of as being one to watch in series 10 is the Hot Dog Guy. Why? Who knows? It's just the kind of goofy, silly concept that works for a line like this. Plus, it also ties in with a subset through the line of humans in bizarre costumes such as series 2's "Bigfoot"
and series 6's Chicken Suit and Dino Mech. Lego already released a Hot Dog Guy of their own but now Imaginext takes a whack at this concept. Ready for a foot long review of a real weenie? Then join me after the break... 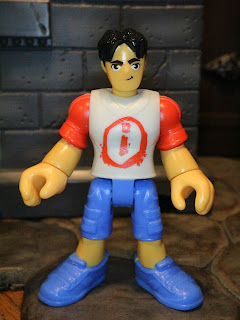 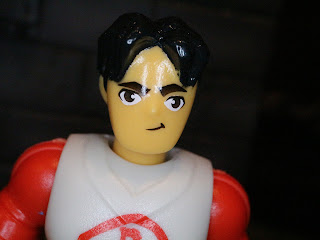 
* I kind of like the expression. He kind of looks like Dick Grayson, doesn't he? That's definitely the vibe I'm getting. I definitely appreciate the fact that Fisher-Price actually uses unique sculpts on these figures. 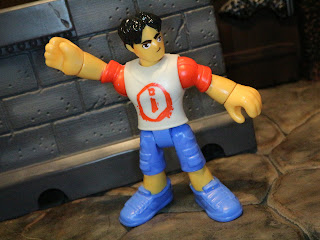 * Like most other Imaginext figures, the Hot Dog Guy is solid, durable, and features the full articulation model for the line. 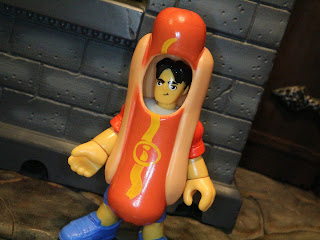 * The Hot Dog Guy's hot dog suit is vital to the figure's appearance as, without it, he is just Guy. It's an overlay made from a softer plastic that slides over the figure's torso and features a large hole for the figure's face to peer out. It also has a mustard streak painted across the hot dog that has a little Imaginext "i" swirl in it. 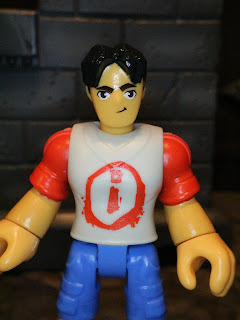 * Without his costume on, the Hot Dog Guy is really boring. He's just plain ol' Guy in a red and white shirt with a homemade Imaginext "i" shirt. Kind of dull, really. Oh, he's also wearing jorts, which is apparently now socially unacceptable for any male who isn't John Cena or Tobias Funke. I don't wear shorts at all, so it's not an issue for me, but I'm still kind of baffled by all of the hate jorts get. 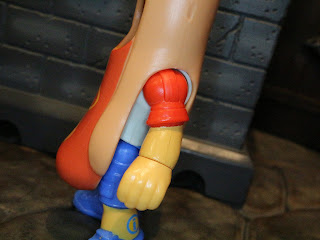 *  For pretty much the line's entire run Imaginext figures have featured very snugly fitting overlays that add on armor or other features to the figures. Series 10 has had some very odd fitting overlays, however, and the Hot Dog Guy suffers here: His hot dog suit is just way too loose, causing the suit to easily bobble around. 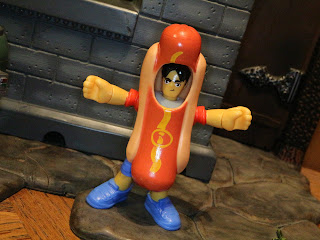 I had high hopes for the Hot Dog Guy but, ultimately, he's kind of an Eh and a 1/2 figure. The hot dog suit doesn't fit right, the underlying figure is extremely plain, and the lack of some kind of cool or silly accessory for the figure to hold is disappointing. He should have been one of the "red hot" figures of this series, but he turned out to be a real weenie.

For more Imaginext Collectible Figures, check out the following: