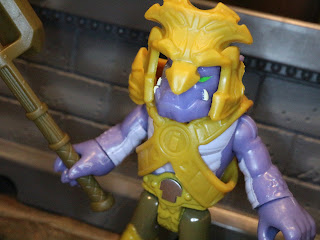 Today I'm checking out another figure in Series 10 of the Imaginext Collectible Figures by Fisher-Price: The Dragon Warrior! Having probably nothing to do with the series of role playing games, the Dragon Warrior is another fantasy character that could easily fit in with one of the Imaginext fantasy themes or just blend in to the crazy legions of little plastic people populating your Imaginext collection. He's a cool design and is actually one of my favorites in Series 10. Let's take a closer look at him after the break... 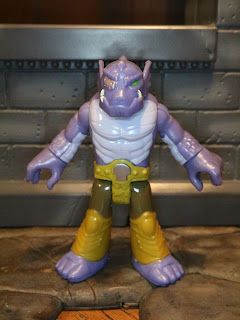 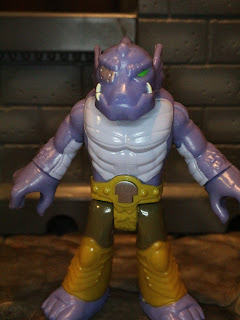 
* I really like the look of this guy. He definitely has a cool fantasy vibe and seems like he could be either a demon of some kind (he kind of looks like Etrigan) or a Dragonborn from Dungeons & Dragons. The purple color scheme of his body/ scales really pops, as do the multiple colors on his legs. 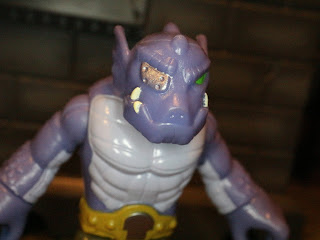 * I love the headsculpt, especially the revealed teeth and the armored patch over the right eye. It kind of reminds me of Thor's eyepatch. 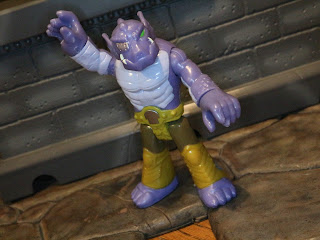 * The Dragon Warrior has almost the same articulation as any other Imaginext figure although his swivel neck is fairly limited. Still, these are really sturdy and fun toys. My daughter has had quite a few Imaginext figures over the years and they're insanely durable. 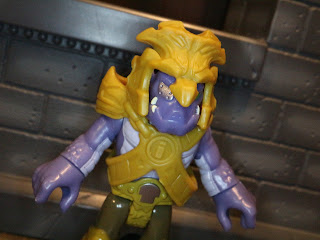 * The Dragon Warrior is sporting some cool battle armor. It's a gold piece that fits around his chest and over his head. It's very intricate and definitely seems like it would add some decent defense to an already naturally well armored guy. 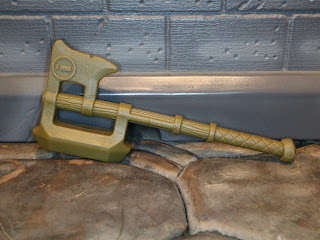 * I also love the Dragon Warrior's weapon. It has an ax blade on one side and a weighted hammer like weapon on the other. Can this guy truly bash and slash or does the weighted hammer add more force to his ax swings? 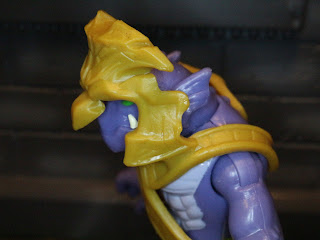 * Armored pieces that fit over the figure are kind of a staple of the Imaginext line but this series has a few pieces of armor that just don't fit the included figures that well. The Dragon Warrior's armor, particularly his headpiece, seems to shift around far too much. 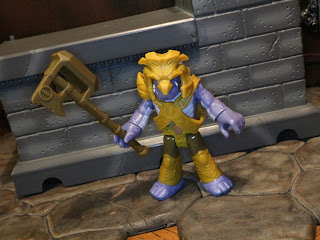 I really like the Dragon Warrior! He's got a fun color scheme, a cool design, and a brutal looking weapon. The armor could fit a bit better but it isn't a deal killer. For less than $4, you're getting a pretty slick action figure that kind of makes me really want an Imaginext Etrigan figure. the Dragon Warrior is a Great figure and whether you see him as a hero or a villain, he'll stand out in your Imaginext collection.

If you're looking for more figures from Series 10, check out the following: