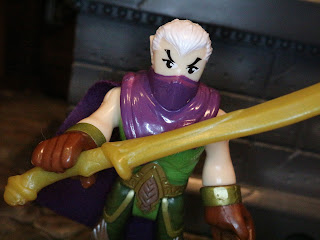 I know what you're thinking: "It's Friday, April 13th 2018. Why isn't Barbecue17 reviewing the new Solo: A Star Wars Story action figures that were released today?" First, let me tell you that those reviews are coming. Second, let me say that due to the bizarre way this product launch was handled/ mishandled I used Amazon to get all of my figures so they'll be showing up this weekend. For now, take solace in this cool Elf Warrior from Series 10 of the Imaginext Collectible Figures. I found most of this series a week or so ago and have been slowly making my way through them. Let's check this guy out after the break... 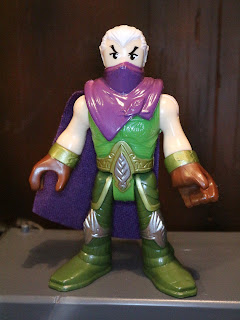 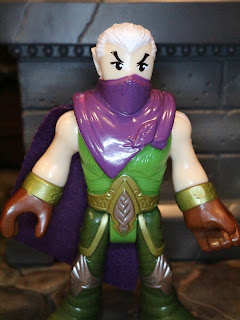 
* The Elf Warrior is a very cool looking figure. While Series 10 didn't have one "must have" figure in it, so far I've liked all of the figures from it. The Elf Warrior has a cool fantasy vibe and looks like he'd fit in perfectly with a Dungeons & Dragons campaign. The green and purple color scheme is very eye-catching while the intricate sculpt of his armor, belt, and knee pads look incredible. 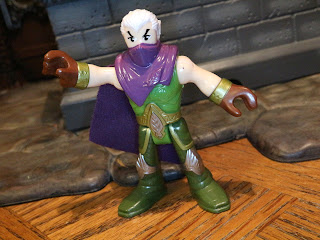 * Other than a missing neck joint (due to the design of the cape), the Elf Warrior has the same articulation scheme as most other Imaginext figures. These are fun, durable action figures that surprisingly feature more articulation than the current standard 1/18th scaled Star Wars line. Wrap your mind around that for a second. 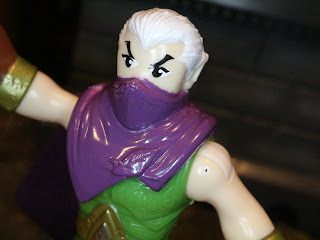 * I love the headsculpt. The white hair and keen elvish ears definitely help separate this guy from your standard fantasy elves, putting him more in line with tougher, more modern depictions of Elves. While it causes him to lose the neck swivel I have to admit that I really like the scarf/ cape combo that the Elf Warrior wears. It reminds me of the video game character Strider's cape/ scarf combo. 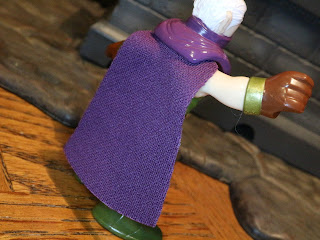 * Interestingly, the Elf Warrior comes with a real fabric cape. It is permanently attached to the plastic scarf piece and the colors of the fabric and the plastic match up really well. 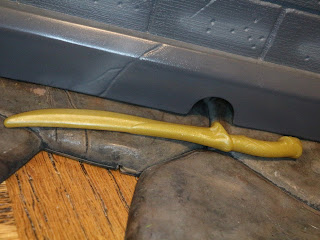 * The Elf Warrior only includes one accessory: An Elvish sword. The style is very similar to the designs of the Elvish blades from Peter Jacksons's The Lord of the Rings films, but that's one heck of a source of inspiration. I love the sleek, aesthetically pleasing design. 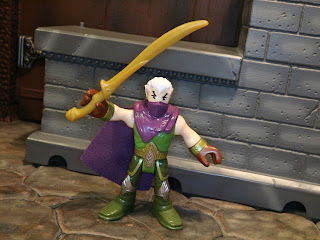 The Elf Warrior turned out to be one of my surprise favorites from this series. In hand I love this figure way more than I thought I would. It feels like it captures a cool mixture of D&D/ The Witcher/ Lord of the Rings brought together by the charming Imaginext style. The Elf Warrior is a Great and a 1/2 figure (especially if you find him for a buck like I did!).