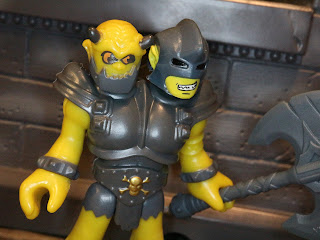 I had virtually no luck finding Series 9 of the Imaginext Collectible Figures line until a few weeks ago when I walked into a Family Dollar with after dinner one night. Lo and behold I found 5 out of the 6 figures from series 9 including the one I wanted the most, the Invisible Man. I didn't even realize series 10 was out but just this week I was in a Wal-Mart and found 5 of the 6 series 10 figures for $1.00 each. That's crazy! It  seems like the series has just started shipping out within the past month or so. I will admit that Series 10 doesn't really have any one "gotta have it" figure but there are a few cool additions to the long running Imaginext Collectible Figures Series. First up I'm checking out the 2-Head Monster who is easily one of the coolest figures in the set. 2-Headed Monsters typically deserve that kind of recognition, you know? More 2-Headed Monster madness after the break... 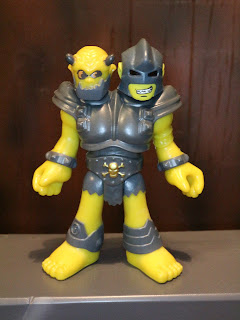 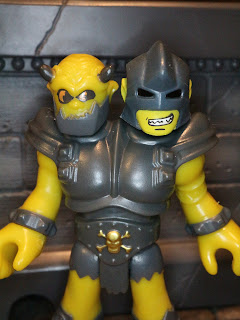 
* The 2-Head Monster has a very appealing character design. The yellowish-green skin is quite cool as is the gray battle armor. I've mentioned in a number of reviews that Imaginext often seems to pull elements from Masters of the Universe (Fisher-Price is part of Mattel, after all) and while you may initially think of Two Bad, the Monsters's right head and skull and crossbones belt reminds me of Trap Jaw. 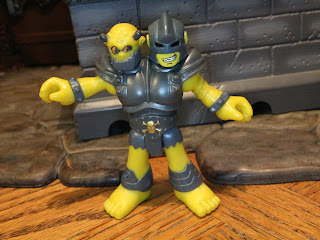 * The Imaginext figures are very sturdy and feature swivel hinge shoulders and hinged legs. While the heads usually swivel, the 2-Headed Monsters heads do not. That's not a huge deal, though. This is still a fun, high quality action figure that stands up straight on your display shelf and is a blast to play with. 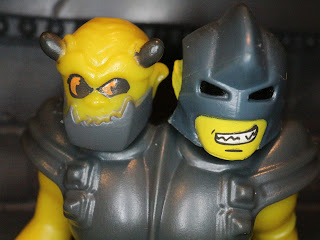 * Here's a closer look at the headsculpts. I love how the right head (with the metal jaw) is glancing over at the left head. The left head has a great lopsided grin and a cool armored helmet. It's a very archetypal 2-headed fantasy creature but it still has a unique design that helps it to stand out a bit. 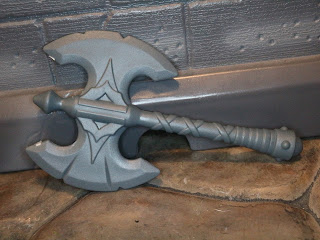 * The double bladed battle axe is great. It is the kind of weapon that looks like it would fit right at home in Masters of the Universe or in any Dungeons & Dragons campaign. 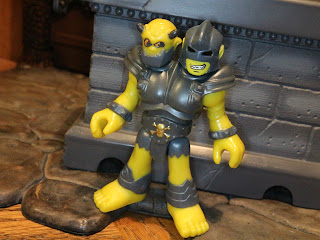 
* I wish the armor had a bit more color to it. I like the gold skull and crossbones but that gold would have also looked great on one of the wrist bracers or on the rivets on the chest armor, too. 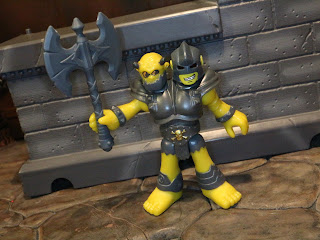 While I only paid a buck, even at the normal price of $3-$4 dollars these Imaginext Collectible figures are a good deal. Fisher-Price often gets creative with these and there is no doubt that the 2-Headed Monster might easily be considered to be one of the starts of Series 10. While it would have been cooler if it (they?) had more than one weapon or a few more paint applications, this is still a pretty nice toy. What kid or collector doesn't love a monster with two heads, right?