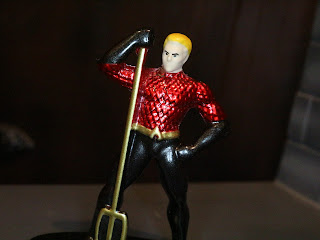 I just recently completed my series 3 figures from Jada Toys excellent DC Nano Metalfigs line so over the next few days I'll be checking out the final three single packed figures I needed to complete my set. First is up is Aquaman (DC46) decked out in red and black. While this figure is simply a repaint of the first series Aquaman (DC9) it is actually a pretty cool and well thought out repaint: It seems like it is supposed to be the villainous Emperor Aquaman from 2011's Flashpoint. I know that repaints and different colorways are a prime way to get more usage out of expensive tooling but I love when companies get clever with their repaints. This is a good one and I think he is even better than the standard version. Let's check him out after the break... 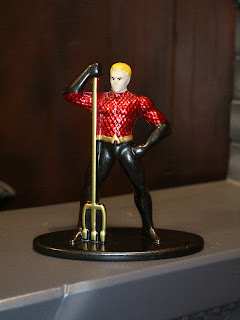 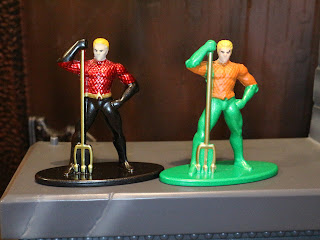 
* Here's a look at the new Aquaman (DC46) and the first series Aquaman (DC9) for comparison. 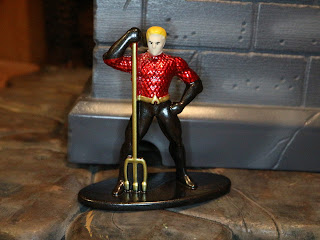 I really like this little guy. He's much cooler looking than the first series figure and is quite striking in the metallic red and black. The DC Nano Metalfigs line is easily one of my favorite current lines at the moment and I'm excited to start looking for the series 4 figures which have just started hitting store shelves in the Western US. This Emperor Aquaman is a Great and a 1/2 Nano Metalfig and well worth tracking down in stores.


If you are looking for more Aquaman action figures I've also checked out the BvS Multiverse Aquaman, the Justice League Aquaman, the Toys R Us exclusive shirtless Aquaman, the Super Friends Aquaman, and the DC Nano Metalfigs Aquaman from the Pack B 5-pack.