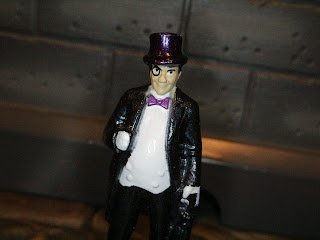 Today I'm checking out the Penguin from Jada Toys DC Nano Metalfigs line. Released only as a single pack in series 3, the Penguin is the last figure I needed to complete the series 3 releases. He also may very well hold the honorific title of the last toy I buy from Toys 'R Us as I picked him up at my local Toys 'R Us on Monday. He was 10 percent off (they're liquidating everything but not terribly quickly) so who knows? Maybe I'll be back again. The Nano Metalfigs line has really done a cool job of offering up a varied mixture of DC characters from different sources and this Penguin, based on the packaging, is based off of Burgess Meredith's portrayal of the character from the Batman 1966 TV Series. Of course, this is just a great looking Penguin in general so he can fit in with any of your Nano Metalfigs. Let's check him out after the break... 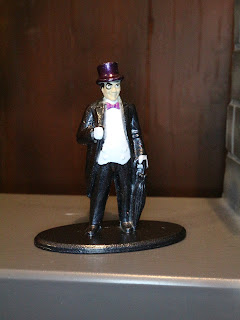 * I love the classic black and white tuxedo of this Penguin complete with a purple bow tie and a purple top hat. It's a great, classic look for the character. Of course, he's also holding one of his umbrellas. Who knows what devious device of dastardly death is housed within? 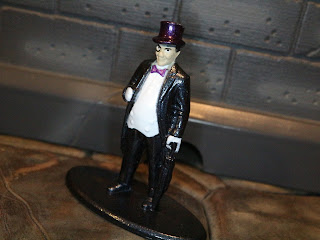 * The paintwork has really improved on these figures since the line first launched last year. They still use an extremely simple palette of just a few colors per figure but they do a great job of selecting those colors and applying the paint cleanly. The faces have improved a lot, too, as you can clearly see Oswald Cobblepot's eyes, grin, hooked nose, and even his monocle. Wow! 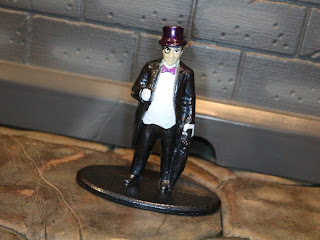 For a dollar these are incredible. It really seems that DC fans and collectors are loving these as the single packs disappear from store shelves quickly. I love the quality of these as you're getting a solid metal figure for less than a buck. The Penguin is a Great and a 1/2 figure and well worth tracking down. Thus far Ive found him to be the hardest figure to get my flippers on, perhaps due to only being available in a single pack and being a Batman villain. Series 4 has started making its way to store shelves this past week so hopefully I'll have my hands on those twelve new figures before long!

If you're looking for more reviews of the Penguin I've also looked at the Lego Arkham Asylum Breakout which includes a Penguin minifigure and Mattel's Batman: Classic TV Series Penguin.