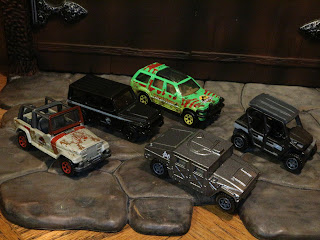 There is nothing I love more than when a toyline starts to go deep. I'm talking releasing characters and/ or vehicles that you didn't even know existed deep.  Yeah, I always expect/ hope/ pray that a Star Wars, Marvel, or DC toyline will go deep, but when something else does? It's crazy. Remember Toy Biz's Lord of the Rings line? They released an action figure of Theodred who is pretty much a toy of a dead guy. That's deep. With Aliens and Predators, NECA is releasing Kenner themed variants and creatures. That's deep. Remember Ghostbusters Minimates? They released a figure of the Mayor. That's deep. One of the recent lines that is going unexpectedly deep is the Matchbox Jurassic World line. Mattel just keeps cranking out Jurassic Park themed vehicles and, considering they're cool and a buck or so, I'm happy to keep buying them. Today I'm checking out the new 5-pack Land Rescue Cnovoy. Jurassic Park vehicle super expert Kooshmeister recently informed me that this set was coming out soon and I was delighted to find it at my local Wal-Mart on Saturday evening. The Land Rescue Convoy features a nice mixture of vehicles from Jurassic Park and Jurassic World (up until this point Jurassic Park vehicles seemed reserved for the Target exclusive Legacy Collection only), and costs less than $5 bucks. How could I resist? Let's check this new set out after the break... 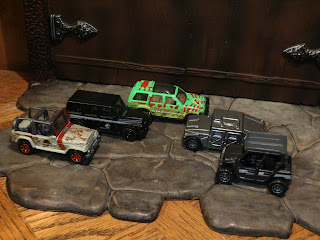 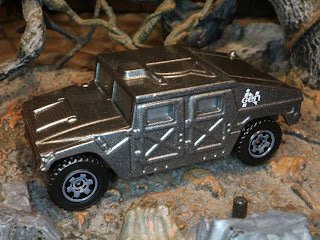 * First up is the Humvee, probably based on the HM General HMMWV that the InGen security division uses in Jurassic World. Want to know what HMMWV stands for? High Mobility Multipurpose Wheeled Vehicle. That's what. Apparently this is an older Matchbox sculpt that may have been used in the original The Lost World diecast line. It does look a bit dated and soft, but it also looks fairly accurate to the source material. The InGen logo is clean and neat, though. 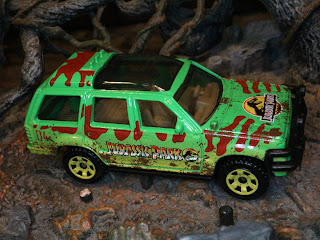 * Next up is another one of the tour cars from the original Jurassic Park. Mattel gave us car #5 (the tour car Grant and Malcom were in during the T-Rex attack) as both a single packed vehicle and in the Island Explorers set so it's nice that we now have car #4, the car that Lex, Tim, and the blood sucking lawyer Donald Gennaro were attacked in. The muddy splatter effect on this one works really well, although I still want a "ruined" version of this car at some point. 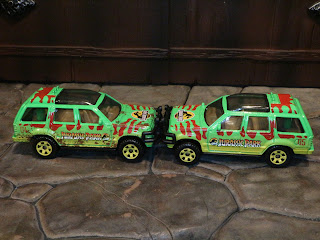 
* Other than the car number on the rear sides and the muddy paint across the bottom, these two cars are exactly the same (which is as they should be). Here's the review of the original release, '93 Ford Explorer #5. 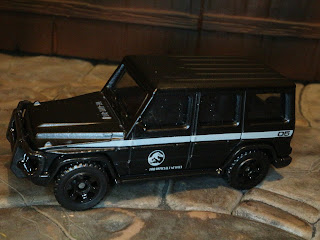 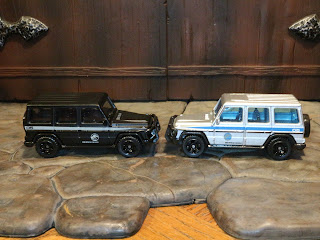 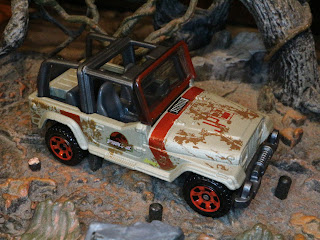 * Another repaint, Jeep Wrangler #29 has the distinction of appearing in two films. In the original Jurassic Park this is the car that transports John Hammond and Donald Gennaro from the heliport to the visitor's center. In Jurassic World it is the car that Zach and Cody Gray fix up and drive around in. This definitely looks like the version from Jurassic World as it's much muddier, probably covered with nearly 20 years worth of dirt, dust, and grime. 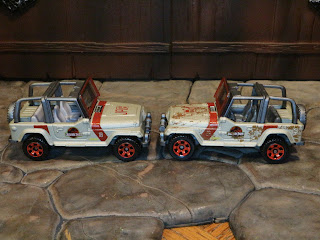 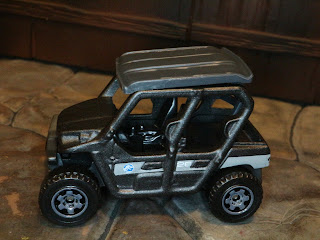 * Last and certainly not least (although it absolutely is the smallest) is the Kawasaki Teryx4 LE. These are little maintenance flitting around Jurassic World that function like more powerful golf carts. The sculpt is really nice and features a lot of open space in the cab, which fits the design well. 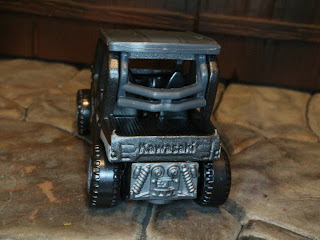 * The back of the Kawasaki Teryx4 LE has a nice amount of sculpting, including actually having Kawasaki sculpted on the back. It's listed as #26 on the side as well. 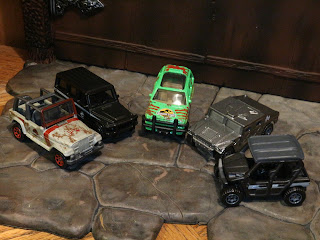 With a nice mixture of new sculpts, reused sculpts, and repaints, Mattel has put out another solid 5-pack in this line. This is a Great set with some very creative choices here. It makes for a fun addition to a Jurassic Park car collection or even just a movie car collection in general. There's a lot of coolness here and the work is overall very high quality. I noticed a second new 5-pack called the All-Terrain Fleet, although it seems to be all repacks except for one truck (the Unimog). If you didn't pick up all of the other vehicles in the set it's probably worth looking into, too. Now, we need a few vehicles from Jurassic Park III in the next set of releases.