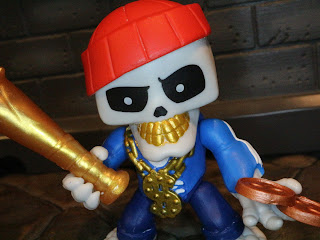 While I'm currently working on lots of reviews for this year's Halloween countdown, The Revenge of 31 Days of Toy Terror, and thus saving up most reviews of spooky toys for October and Re-Halloween, I've decided that I'm going to go ahead and review the Treasure X guys I've been picking up lately. They're pretty popular right now and I'm anxious to show off who I've picked up. Today I'm checking out Rogue Goldsnatcher, a member of The Bling Bandits. Dang. Rogue Goldsnatcher. That's a flipping cool name. I'm not planning on having any more kids but if I were that's a name I'd throw in the hat. Imagine how far you'd go in life with a name like Rogue Goldsnatcher. That's a perfect name for a globe-trotting treasure hunter, a repo man, or one of those folks who chills out at the farmers market on Saturday mornings to talk about compost and sell homemade goat soap. Rogue Goldsnatcher, indeed. Anyways, Rogue Goldsnatcher was the second figure I dug up and I purchased him the same day that I bought my first Treasure X figure, Goldblade. Ready for a quick look at Rogue Goldsnatcher? Then join me after the break... 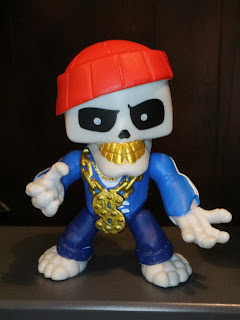 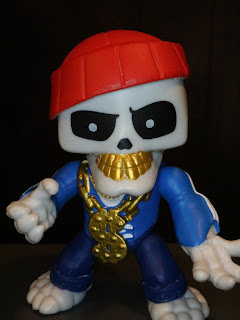 * While the overall aesthetic of the Treasure X line seems to mesh loose historical interpretations of treasure hunting skeletons with the design sensibilities of the urban vinyl movement, the Bling Bandits seem to really reflect the look of many urban vinyl figures. With his gold teeth, blue track jacket, and a dollar sign necklace, Rogue Goldsnatcher looks far more modern than most of his counterparts in the line. If he handed me a copy of his demo tape, I'd probably listen to it. 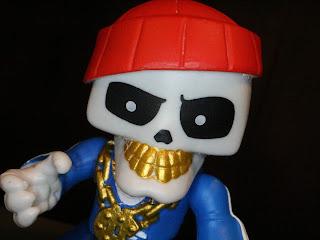 * As with Goldblade, I love the design of the skull, particularly the eyes. The mixture of sculpt and paintwork here does a nice job of creating a fun and stylized skeletal figure. 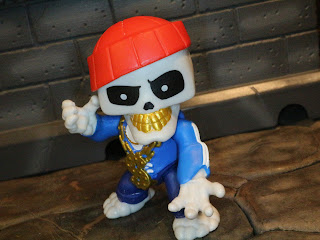 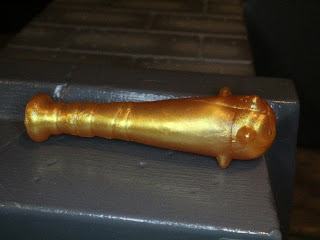 * Rogue Goldsnatcher comes with a club. It looks kind of like a shorter baseball bat with a few spikes sticking out of the end and some tape wrapped around the handle. The bat is molded in a pearlescent gold plastic which seems to be standard for this line. 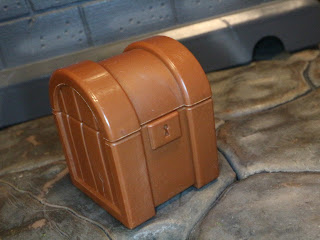 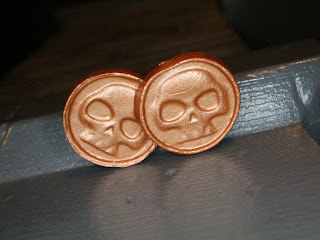 * Every figure includes a treasure and Rogue Goldsnatcher comes with a pair of Bronze Sovereigns (they're attached together). When I reviewed Goldblade I was under the impression that the treasures were random but they're not. Unless you get one of the chase actual gold plated treasure instead of a standard treasure, the standard treasure that comes with each figure is designated. Goldblade has the Jade Fortune Cat, Doctor Goldspell has the Crystla Spear, Rogue Goldsnatcher has the Bronze Sovereigns, and so on. 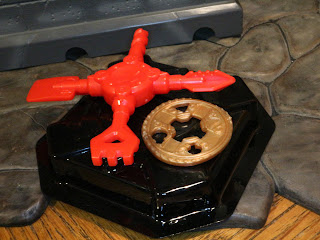 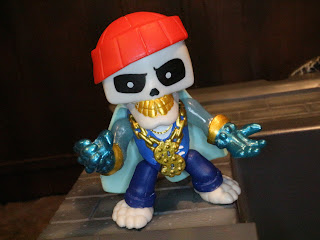 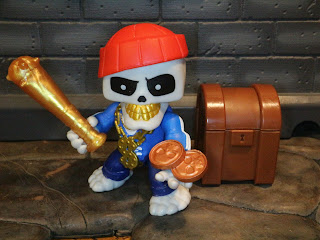 While Rogue Goldsnatcher might not be as cool as Goldblade, I have to admit that I'm quite fond of him. He has a very cool aesthetic and nicely mixes with pieces from other figures to creature more cool looks. Coming in around $10, part of the cost of these is due to the experience of digging them up and opening the foaming treasure chest. While that was fun the first few times I did it at this point I kind of wish these were a couple of bucks cheaper. I really like the figures but they're a bit more than your standard minifigure. Still, Rogue Goldsnatcher is a Good and a 1/2 figure with an amazing name; he's not a bad pull if you end up with him.


This is the first Rogue Goldsnatcher figure I've reviewed. For more Treasure X check out the following:
Excavating a Treasure X set
Goldblade
Posted by Barbecue17 at 8/25/2018