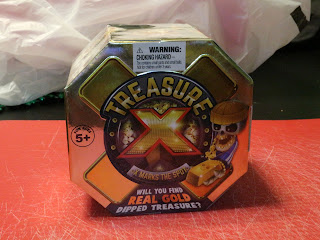 As we are approaching the Halloween season and all of our thoughts turn to moldy tombs, ancient curses, and spooky skeletons, I think I speak for everyone when I say that we will definitely be spending some time talking about Treasure X from Moose Toys. Treasure X is the newest blind bagged minifigure sensation from Moose Toys, creators of Shopkins, the Grossery Gang, Pikmi Pops, Trash Pack, and other currently popular toys and like those other toys it relies on a careful blend of mystery, marketing, and legitimately cool minifigures. Having a soon to be five year old daughter who adores these miniature toylines like Shopkins, Hatchimals, Flush Force, Num Noms, and the Grossery Gang and, being a minifigure collector myself, these were definitely on my radar. The concept of Treasure X is that each $10 package involves a 10-stage treasure hunt to unearth a skeletal treasure hunter and an ancient treasure that could actually be gold plated (that's kind of the "chase" aspect of the line). I'll be reviewing a couple of the minifigures themselves separately over the coming months but today I want to simply go over the concept of the line so you can get an idea of how it works. Ready to get digging? Then grab your shovel and join me after the break... 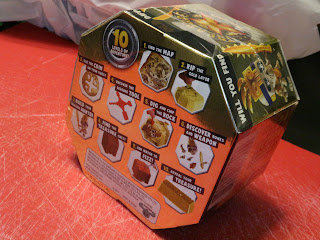 * Here is the pack of the package. It's made from golden foil covered cardboard and shows off some of the minifigures in the set along with all 10 stages of the treasure hunt. Some of the steps are very cool, others are kind of lame, but  I guess that's to be expected. Take note: Each package is insanely heavy! These things have to weigh at least a pound if not more! You could absolutely melee your rival treasure hunters with them if the occasion arose. 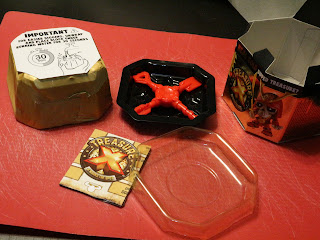 * Once you open the package you get quite a bit of stuff: A treasure block, a black tray/ display base, a red digging tool and a treasure map. The clear plastic tray is just part of the packaging but I took a picture of it anyways. You could theoretically use it to keep some water in while your digging. I collected the bones I found in it. 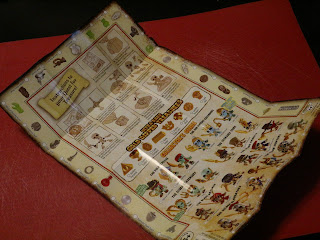 Surprisingly, Step 1 is not "cut a hole in a box." It's actually to find the map. The map isn't really hidden, though, but I can understand Moose Toys' logic. The map does help guide you through the digging process. It also serves as a checklist for the treasures and as a way to show off all of the available minifigures in the line. 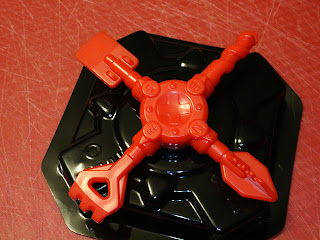 *Inside is the digging tool. It kind of reminds me of a four-way lug wrench but instead of having socket wrenches on the end it has four different excavation tools: A flat spade, a drill, a spear, and a rake. This is made of plastic but it is pretty heavy duty and definitely shouldn't break on you when you're using it. 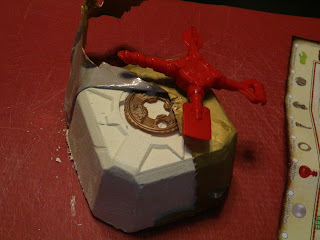 Next up you'll have to open up the treasure block. The packaging recommends using the digging tool to open the packaging although adults who carry a pocket knife will probably just turn to that. At this point you'll definitely want to be using a tray or table covering of some sort as once the plastic covering comes off of the treasure block the powdery sand-like material will start getting everywhere. On top of the block is the coin, which you use next. 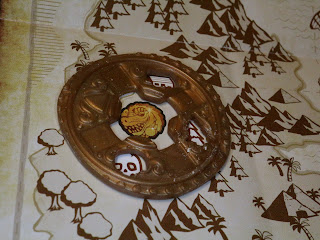 * On the map are eight symbols which represent the eight gold plated "chase" treasures you might find. There's a a golden pyramid, goblet, compass, ingot, skull, idol, dragon, and eagle crest. To determine which gold treasure you might find match up the three marks in the coin (skulls, trees, houses, etc.) and you'll find the treasure in the middle. Again, it's only a possibility, so while it's fun this step feels a bit useless. If the 24 standard treasures were all divided into "families" along with the gold treasures, this might be a bit cooler. 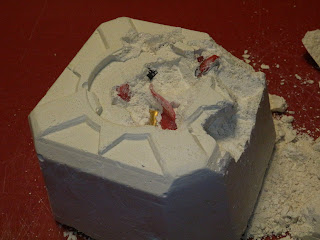 * Now that we know what we might find it's time to start digging, just like you're talking 'bout Shaft. The packaging recommends that you run the treasure block under water for 30 seconds and, let me tell you, this really helps. I didn't for this one since I was photographing but my daughter and I opened a second one and used water and it was so much easier. Just start hacking away at the sides and soon you'll start finding stuff! 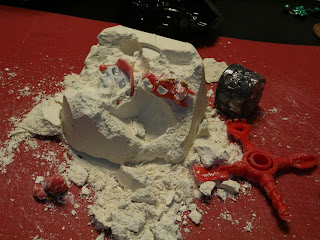 * There's quite a bit of stuff in here. Inside you'll find a treasure chest and the parts of your skeletal treasure hunter: A head, torso, arms, legs, and a weapon. Unearthing the pieces does take quite a bit of time and makes a substantial mess, so you're not going to be pulling these out in your car and seeing what's inside. It definitely is a fun concept although I can imagine collectors trying to assemble the whole set may grow tired of it after awhile. It's a lot of work. 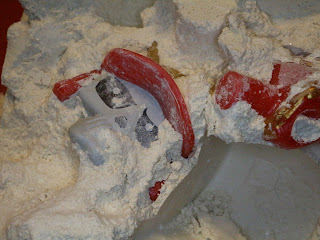 * Here you can see more of my dig site as I am excavating Goldblade, the samurai member of the Blade Brigade. These are pretty sturdy little figures but still be careful with your excavation tool. You don't want to scratch or scuff the figure up too much. 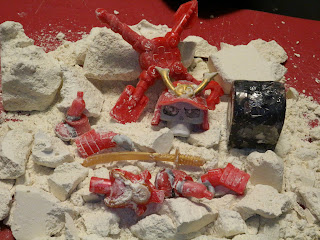 * Here are all the pieces after the dig. You're going to have to rinse everything off and make sure that the holes for the joints are cleaned out. The sandy material rinses off pretty easily and doesn't really stick, so cleaning them isn't too much of a chore. At this point, once you have every piece, you can toss out the remains of the treasure block, too. I opened mine on a flexible cutting board so I could fold it up and slide it right into the trash. 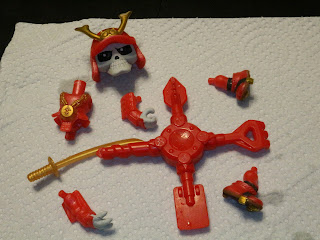 * And here is everything cleaned off. Again, you're looking for a head, torso, weapon, two arms, and two legs (as well as the treasure chest). The joints are swivel joints and they plug in and pull out quite easily. 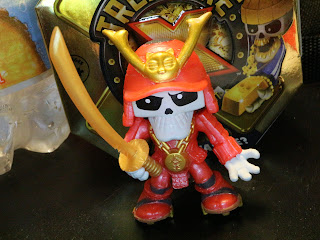 * And here's the assembled Goldblade! The assembled figure stands between 2 1/4ths and 2 1/2 inches tall. He's pretty cool and features swivel shoulders, swivel hips, and a swivel head. The weapon fits easily in his right hand while his left hand is designed for holding the treasure. Oh, yeah, treasure. Let's see what we got! 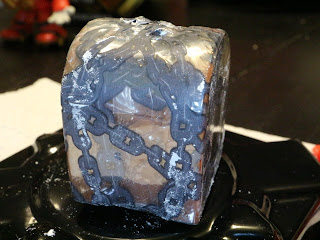 * The treasure chest comes wrapped in chains. In reality it is three layers of plastic with "chains" printed on it, but it keeps the chest dry and safe and goes with the theme. You can definitely use the included excavation tool to peel it open although a handy, dandy pocket knife works even better. 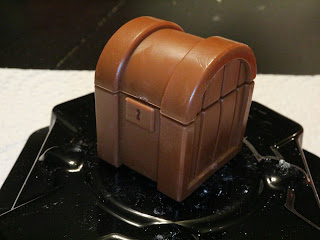 * After you remove those chains you are left with this small brown treasure chest! It's kind of cool and might work well in displays or in a game of Dungeons and Dragons. 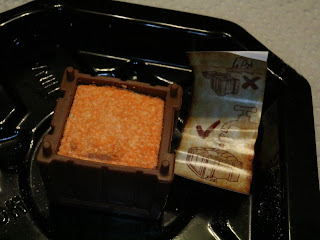 * Take the lid off of the chest and you'll find this mysterious orange powder (Is it sand? Is it gold?) and a scroll. The scroll tells you to add water. Let's do that... 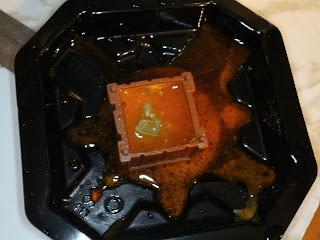 * Whoah! What's that? It's bubbling! Adding a bit of water causes the mysterious orange substance to bubble away. This is definitely the time to use the included black plastic tray. 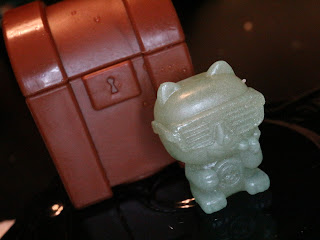 * Inside is the treasure! I got the cool glow-in-the-dark "Jade Fortune Cat." I really like this treasure as it has a near sculpt, plus the cat is wearing some funky sunglasses. 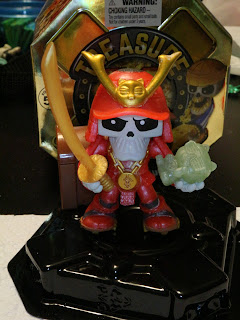 So... that's a Treasure X figure from Moose Toys. The figures are pretty cool and feature some articulation and an accessory. Of course you're also getting a mini treasure with and a mini treasure chest, the coin, the digging tool (though that might be limited in reuse). Oh, and the plastic tray turns into a base for the figure. Overall, you're getting a lot of stuff here and I'm sure kids will eat it up but for someone more interested in just the figures, the $10 price tag is a bit high. You're definitely paying for the presentation and the experience, all of which is top notch, but if you're a minifigure collector snapping these up the gimmick might wear thin after a time or two. There is no way that you could tell which random figure and random treasure you're getting here, so you are absolutely going in blind. With 24 different skeletons and 24 common treasures (along with 8 rare actual gold plated treasures) that's a lot of options. This would be an insanely hard line to completely collect. Still, these are fun to pick up and I would definitely advise minifigure collectors to at least give them a go.
Posted by Barbecue17 at 8/14/2018