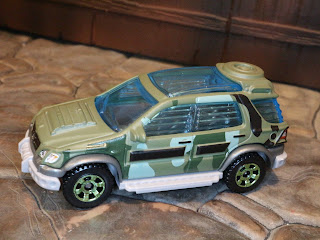 A month or so ago I was roaming through Target when I stumbled upon single packed Jurassic World: Legacy Collection '97 Mercedes-Benz 320 from Matchbox. It turns out that the single packed Mercedes-Benz from The Lost World is actually a bit different than the version included with the somewhat more easy to find Island Explorers 5-pack. Disappointingly, it's just a paint difference and not a different model (as there were actually different models of the car used in the film with various extra accoutrements to differentiate them). This is still the Montana model, and it's the vehicle that doesn't get used in the film but instead gets left behind in Eddie Carr's garage. The Fontana and the Santana are the two that actually get used, so why they didn't get made in this line I have no idea. Want to check out this car to see the minor differences from the 5-pack version? If so then join me after the break... 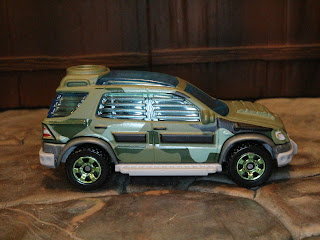 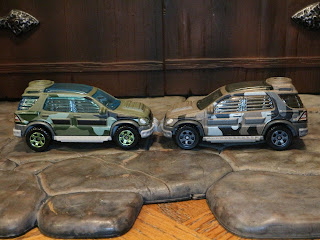 * Here's a pic of the single packed Montana (left) with the one from the Island Explorers 5-pack (right). As you can see they are exactly the same sculpt with different paint on the body and rims and different colored translucent plastic for the windows. 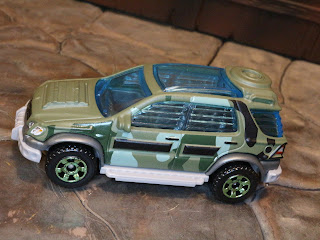 
* The Mercedes-Benz ML320 does have a lot of detail on it including the window bars, the tire mounted on top, and a winch on the front. I actually like the brighter paint scheme a bit better than the 5-pack version as it seems a bit truer to the film version of the car. 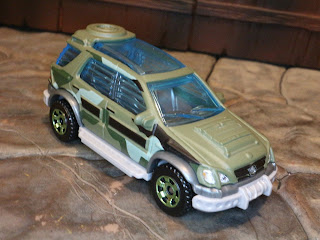 While it's probably the least desirable model of the three Mercedes-Benz vehicles from the film, the Montana is still fairly recognizable as one of the cars from The Lost World. It's not a must buy, particularly if you already have the Island Explorers 5-pack, but for $1 and some change it does net you an extra car. If you're not terribly hung up on the details it's still a nice way to get a second Mercedes-Benz to reenact some Lost World antics. It's a Good and a 1/2 vehicle and definitely worth the price if you're interested in these non-dinosaur Jurassic Park toys.


Again, I've also reviewed the Island Explorers model of this vehicle. If you're looking for more Matchbox Jurassic World: Legacy Collection vehicles, check that set out.