Halloween Decorations I Keep Up All Year Long! 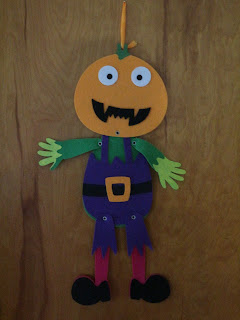 Every year on August 1st when I officially declare that the 99 Days of Halloween have begun (the Reel Brad Bell called me yesterday to wish me a Happy Halloween, so you know that means the 99 Days of Halloween is totally a real thing) my wife always acts like she has never heard of this tradition and begins to comment that it's too early to put up Halloween decorations. While we do have an understanding that outside decorations cannot go up until after my birthday in mid-late September, I absolutely begin to sneak some inside decorations up during August. Of course, there are a few decorations that I leave up all year long! Now my famed hobby room certainly has some stuff up all the time, but that's a toy collection and museum so it is more acceptable to have weird stuff in there. The rest of the stuff, though? Somehow I've managed to convince my wife that these are perfectly acceptable year round. First up is a felt image of me, your old pal Barbecue17! He hangs on the door of my study that is right off of our main entryway and greets people year round while simultaneously guarding my study from Halloween Haters. Of course, that's just the tip of the eerie iceburg... 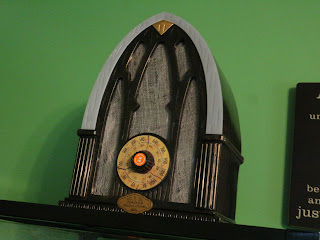 * This looks like a regular old time radio and somehow I've managed to keep it on top of one of my Ikea shelf that displays my Mezco: One 12 Collective figures year round. Turn the dial and it lights up, makes radio static and squelching sounds, and emits bizarre Halloween themed broadcasts. 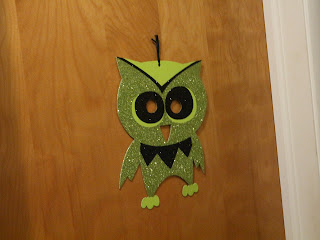 * Remember this Green Glittery Owl from the original year of Hokey Halloween Horror at ThEpic Review? I bought it for my daughter who was two weeks old at the time. Now, she's almost 5 and she keeps it on the outside of her door all year long. I'm winning at parenting, y'all! Fun Fact: My daughter wants to put up Halloween decorations as early as I do. I'm raising her right! 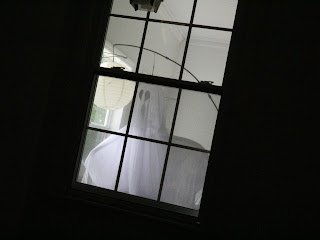 * Here's another one I'm proud of: While I do move this ghost to a more prominent place during the Halloween season, throughout the year I keep him in this upstairs sun room. What's cool, though, is that he peeks out of a very high up window that looks into a stairwell leading down into the bottom floor of our house (it's a split level on a hill). Our guest room is down there so many guests have been startled by this spooky specter gazing at them when they get up in the middle of the night to come upstairs to take a leak. 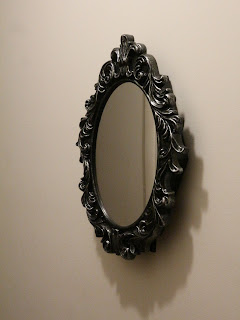 * Here's another victory! This very antique looking mirror hangs in our hallway right across from out bathroom and gets regular use when we're flossing and such. Of course, it's not just a regular mirror.. 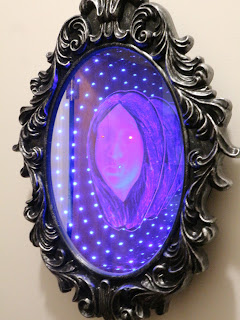 * Push a button or set the motion sensor on and it turns into an infinity mirror that shows off the head of a ghost. Her eyes glow red and she wails like a banshee. Pretty spooky, huh? My little one likes to turn this one on randomly while we have guests over. It really startles some people and, since it is outside of the bathroom, it sometimes saves them a trip. Some mopping might be required, though. 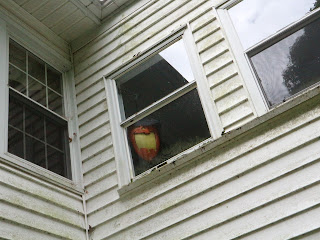 * Last, but not least, is this spooky pumpkin creature who gazes out of this sun room window on the backside of my house. He's kind of eerie, isn't he? I kind of need to power wash the back of the house too, don't I?

So... what Halloween decorations do you keep up all year long? Let me know in the comments below! Heck, email them to me at Barbcue17 (at) actionfigurebarbecue.com and I might even share them on a future post!
Posted by Barbecue17 at 8/02/2018