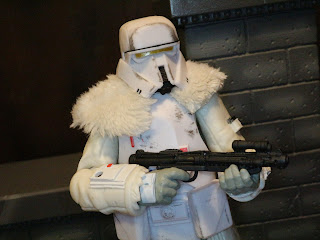 This is it! The first action figure based on the upcoming Solo: A Star Wars Story that I've reviewed! Today I'm checking out the Range Trooper, the only villainous character from Solo currently available in the Black Series. Having been referred to as the Pimp Trooper by fans due to his furry white cloak, the Range Trooper seems like an evolutionary link between the design of the cold weather Clone Trooper armor and the classic Imperial Snowtrooper armor.  This makes sense considering that Solo takes place about 10 years before A New Hope (Rebels takes place about 5 years before, FYI), so we're kind of seeing another unexplored point in time for the New Canon. The Range Trooper seems to be a specialized trooper for remote worlds with harsh weather but it will be interesting to see how prevalent they are in the film. We still have about a month to wait for that, so let's spend some time now checking out this very cool figure after the break... 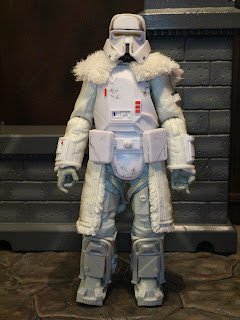 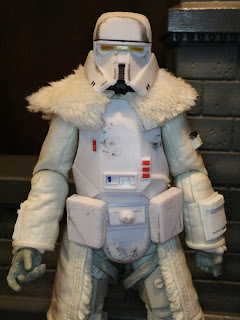 * The Range Trooper is a pretty impressive looking trooper. You can definitely see elements of classic favorites such as the Snowtrooper and AT-AT Driver in the design, but also elements of newer designs like the AT-ACT Driver and the Hovertank Pilot, particularly when it comes down to the design of the helmet. The Range Trooper is a rather large figure thanks to the bulky armor and outfit, making him seem a bit larger than your average trooper. Like with many of the Imperial cold weather troops his paint design is a mixture of bright white for the armored elements and a grayish white for the cloth outfit elements. 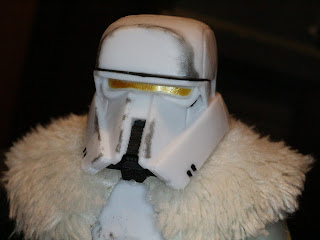 * I love the helmet. The design is great, particularly the gold visor, and I love the weathering and damage on it. 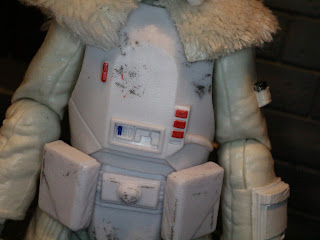 * The Range Trooper's chest plate is excellent. Not only is there plenty of sculpted and painted detail but you also have some more great weathering, too. Plus, I dig those large pouches on the Range Trooper's belt.

* Let's talk about the standout element of the figure's design: The furry white collar/ cloak that rests over the figure's shoulders. It isn't removable unless you fully pull off the head (which is not easily removable), so it fits nicely on the figure and doesn't shift much. It's a great cloth accessory and really looks and feels like what you'd expect from this type of material. Maybe it's Wampa fur? 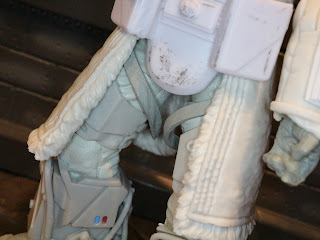 * Like the Snowtrooper, the Range Trooper is wearing a "duster" of sorts that flows over his hips and down to his knees. Interestingly, the Snowtrooper's duster actually attaches around his hips thanks to some gray straps. This is an interesting design that seems like it would help the "duster" portion of the Trooper's outfit from flaring up and around. 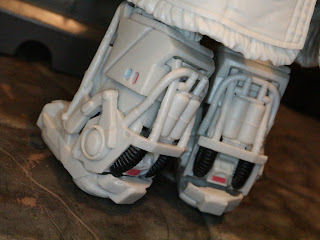 * Another really cool aspect of the Range Trooper's design are these crazy boots. What is their deal! They look very mechanical, seemingly having various belts and fuel tanks in them. They're incredibly cool and have a few minor painted details on the back, too. 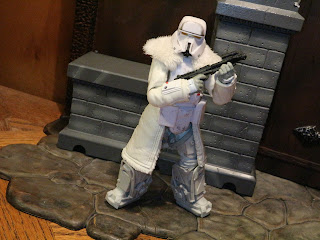 * Due to his somewhat bulky outfit the Range Trooper does have some mobility issues. Still, the articulation isn't bad and this is a fun figure to pose and a durable figure to play with. 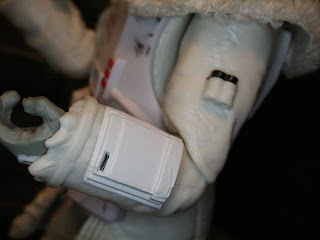 * The Range Trooper has other cool little details, too, such as these pads and devices on the forearms on both sides and the cylinders on his left bicep. 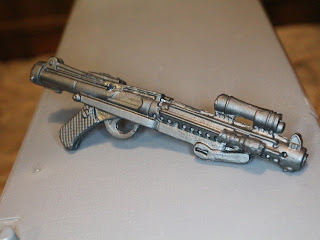 * I don't know the official name of this blaster yet but it definitely looks like a version of the E-11 blaster rifle with some extra scopes greebles on it. It's a great accessory, but guess what?

*From every source I've been able to find the Range Trooper's rifle is supposed to be white. It seems like Hasbro missed this detail and left off the paint applications. Bummer. 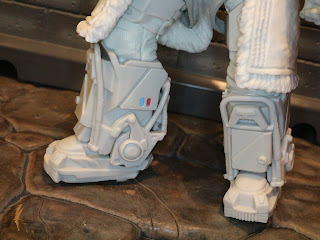 * The boots are very cool but they make it very hard for the figure to stand. They do seem to have a swivel joint in addition to the hinge joints but they're pretty tough to get any range of motion from. This guy has to be posed just right or else he tumbles over. 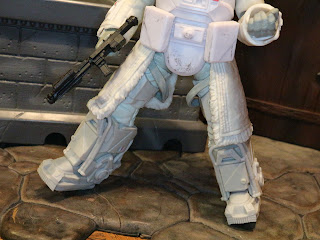 * The hips are also very restricted, making wider poses rather difficult to maintain. 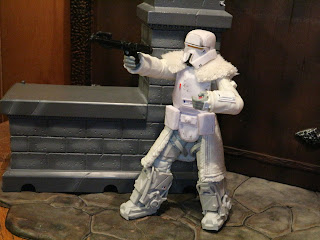 The Range Trooper is a very cool troop builder figure. I'm rather excited to see these guys show up in Solo and have high hopes we'll see more cool troop types, too. This is a Great 1/2 figure with some excellent paint work and sculpted detail. I love his blaster but I wish it were painted the proper colors. Still, the design and the unique elements such as the straps on the hips and the fur color really work well. There's a lot to love here and the Range Trooper has me even more excited for Solo: A Star Wars Story.


This is the first Range Trooper figure I've reviewed. For more Star Wars: The Black Series figures check out the following: