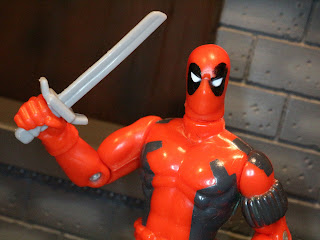 Hi kids! Today we're going to talk about something that just under 5 inches long and that I've been playing with since I was a kid....a Deadpool action figure, of course! Yes, today I'm reviewing my actual childhood Deadpool action figure from Toy Biz's 1992 X-Men: X-Force line. I received him for Christmas in 1992 back when Toy Biz's X-Men line was one of the hottest things around. Toy Biz released hundreds of Marvel figures before they ever got around to the revolutionary Marvel Legends line and one of their first spinoffs of the X-Men line was an X-Force subset that would grow to take on a life of its own. Over the next four Saturdays in April I'm going to be reviewing a different Deadpool toy from my collection for your enjoyment since he is the character you voted for in last month's poll. With the anticipation of the release of Deadpool 2 and the character's popularity at an all time high, folks must be interested to see more plastic versions of Wade Wilson. Let's check out the original Deadpool action figure after the break... 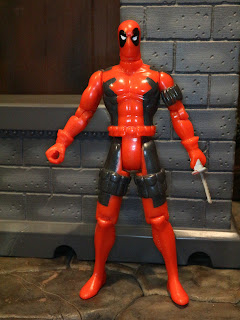 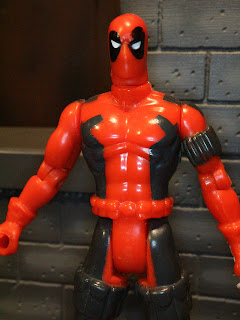 
* Toy Biz's Marvel figures all had a very similar style early on and even though Deadpool is a bit plainer than some, he matches the appearance of his earliest comic appearances really well. The paint work is definitely pretty cool and reflective of the style of the times and the sculpting even captures the various belts and pouches adorning the character's outfit. 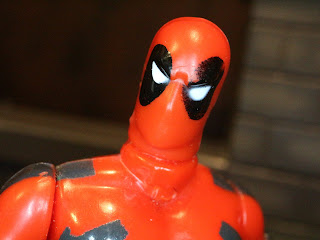 * I like the headsculpt (if it looks a bit worn, remember that this is my childhood version that has been with me for about 26 years now). The simple paintwork and sculpt still manages to give off the Deadpool vibe that helped to make the character so popular (even though he didn't really start off as the Deadpool we know and love today- that came later!). 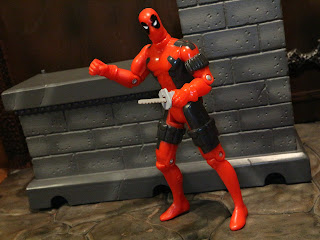 * Deadpool featured the standard articulation scheme of most of Toy Biz's Marvel figures from this period which was a blend of swivel joints and hinge joints. For the time it was definitely on par with most other toylines (except for G.I. Joe) if not more impressive due to the hinged elbows and knees. Some of the Toy Biz figures had breakage problems but not ol' Deadpool. He's been trucking along in my collection for a long time and is still always ready for action. 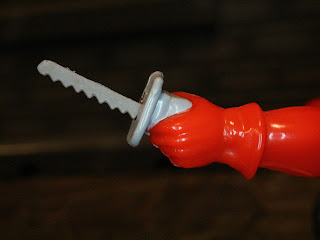 * Like the earlier Kenner Super Powers toyline, Toy Biz tried to give every figure an action feature of some sort that replicated their powers or skill set in some way. Deadpool has a "Spring-Out Dagger" permanently affixed to his left hand (it's part of the sculpt). Push in the serrated dagger blade and the blade glides in and then pops out again. To be honest, it works more like one of those trick knives that makes it seem as if you're stabbing someone, so it makes me wonder if the real intention for the feature is that Deadpool can stab some fools.

* Deadpool comes with two swords. They're pretty cool although they're a bit shorter than you would think. The handles have a cool pattern, though. 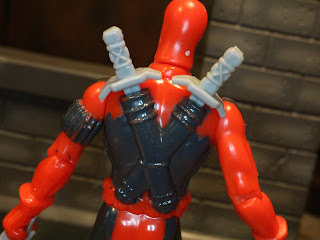 * I assume they are shorter so they can fit into the two sheathes on Deadpool's back. That's a pretty cool feature that I don't remember too many other figures having at the time. 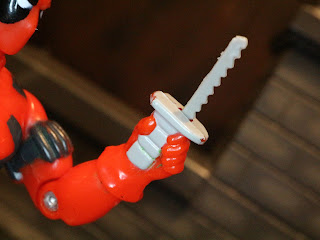 * The "Real Stabbing Action" knife (not the real name of the feature, but you know that is what Toy Biz intended) is cool but since it isn't removable it means that Deadpool can never wield both of his swords at the same time. That's kind of lame, don't you think? 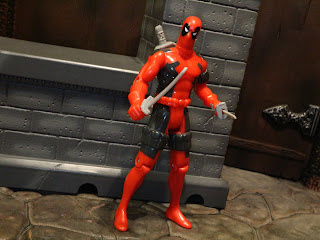 Considering this is one of the few Toy Biz Marvel figures from the 1990s that I've always kept around, you can probably guess that I think Deadpool is a pretty Great figure. This has always been one of my favorites, ever back before I even had a clue as to who Deadpool was. There was just something appealing to me about the costume and the overall figure design. It's pretty cool that Deadpool had an action figure within 2 years of his first appearance and it makes for an interesting item for fans and collectors of the character to track down.

If you're looking for another Deadpool review I've also checked out Mezco's One:12 Collective Deadpool!
Posted by Barbecue17 at 4/07/2018