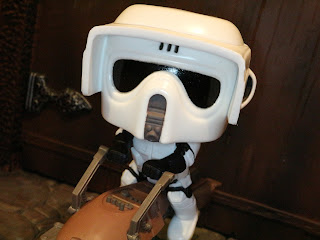 Just last week I received the newest Smuggler's Bounty box in the mail. It's quite possible this will be one of the last Smuggler's Bounty boxes I receive too as, rather strangely, Funko has decided to cancel all of their subscription boxes. September is supposed to be the last month for the Smuggler's Bounty box to be available online, although now Funko is offering them first come first serve rather than allowing you to subscribe and be guaranteed a box. Funko, like a few other pop culture toy companies, seems to really relish enjoy continually making their products more and more difficult to purchase. Anyways, enough with the doom and gloom! Let's talk about the Funko POP! that was released in the most recent Endor themed Smuggler's Bounty crate: The Scout Trooper with Speeder Bike. When you think Endor, the first things you think of are Ewoks. I guarantee that the next thing that pops up in most Star Wars fans minds are the Biker Scouts/ Scout Troopers and Speeder Bikes. Perhaps one of the coolest Imperial troop designs ever, the Scout Troopers have long been favorites for me and I'm excited to have a Funko POP! version of the Scout Trooper cruising along. Let's take a closer look at this super cool deluxe POP! figure after the break... 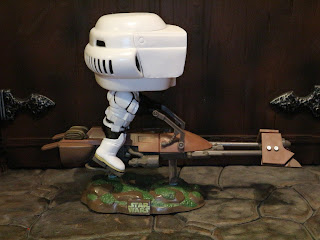 Non-Scalper Price: $25 as part of the March Smuggler's Bounty crate along with an Endor tin with a Wicket plush keychain, Endor socks, and an Ewok patch. 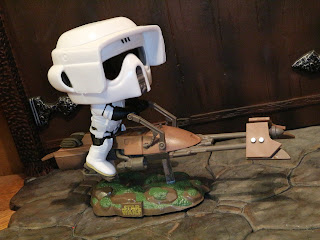 * I like the Star Wars Funko POP! vinyls but I really love the deluxe ones. The characters look great on their various vehicles and the Scout Trooper is one of my favorites. The scale between the Scout Trooper and the Speeder Bike is excellent (although still caricatured) and makes for an impressive looking decoration for your shelf or desk. 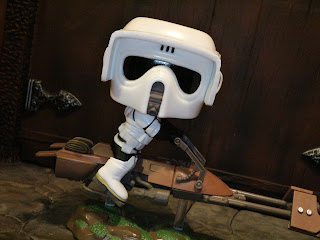 * Since these figures have bobbling heads it is possible to turn the included spring a bit so that you can "pose"the Scout Trooper's head. Having the ability to pose your Biker Scout looking sideways or straight ahead does give you a few different options for display which is definitely appreciated. 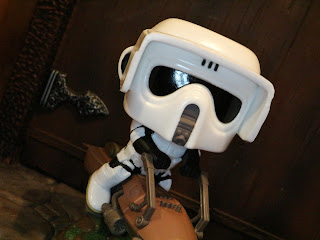 * The sculpt on the Scout Trooper is fantastic. The helmet and light armor on the POP! are incredibly well rendered here. The paintwork is also fantastic and looks super clean for a figure with white and black details. 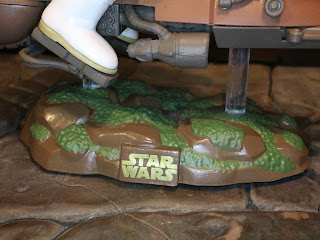 * The Scout Trooper doesn't feature a removable base like the standard figures do but instead has the more elaborate permanent bases that most of the vehicles have. Clear plastic poles give the illusion that the Speeder Bike is hovering off of the ground while the base itself is decorated with some rocks and various spots of grass and moss. 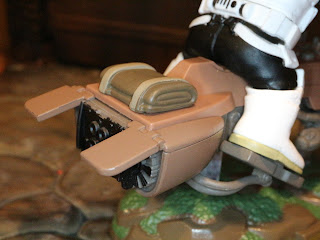 * Each part of the Speeder Bike is wonderfully detailed. I'm always thrilled by how well Funko captures the smaller, technical details of Star Wars designs despite the fact that they're creating stylized toys. The thrust flaps are in the up position and look great. Remember how easily these things popped off of the old Kenner POTF2 Speeder Bikes? I'm also digging the pouch strapped to the back. 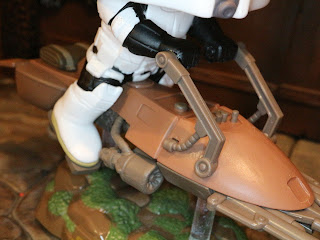 * The altitude controls (the foot pedals) and the maneuvering controls (the handlebars) also look great. I love how the Scout Trooper is really interacting with them. You can also clearly see the power cell hanging down from the bottom of the Speeder Bike. 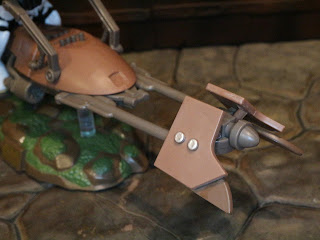 * The steering vanes look great and you can see all of the little extras this bike sports such as the Comlink in the middle of the outriggers. There is a blaster cannon underneath but I didn't get a good photo of it. Sorry!

I've liked most of Funko's POP! Star Wars vehicles but this one is definitely one of my favorites. I love Speeder Bikes and Scout Troopers in general but the way this figure was pulled off is magnificent. I get frustrated by Funko's gimmicky sales tactics but I definitely cannot find fault with the coolness of their Star Wars releases. This is an Epic POP! vinyl and one of my favorites from the collection yet.


The only other Scout Troopers and/or Speeder Bikes I've reviewed were both in the Hasbro Micro Machines Endor Forest Battle set.