Action Figure Review: Arrow from Masters of the Universe Classics by Mattel 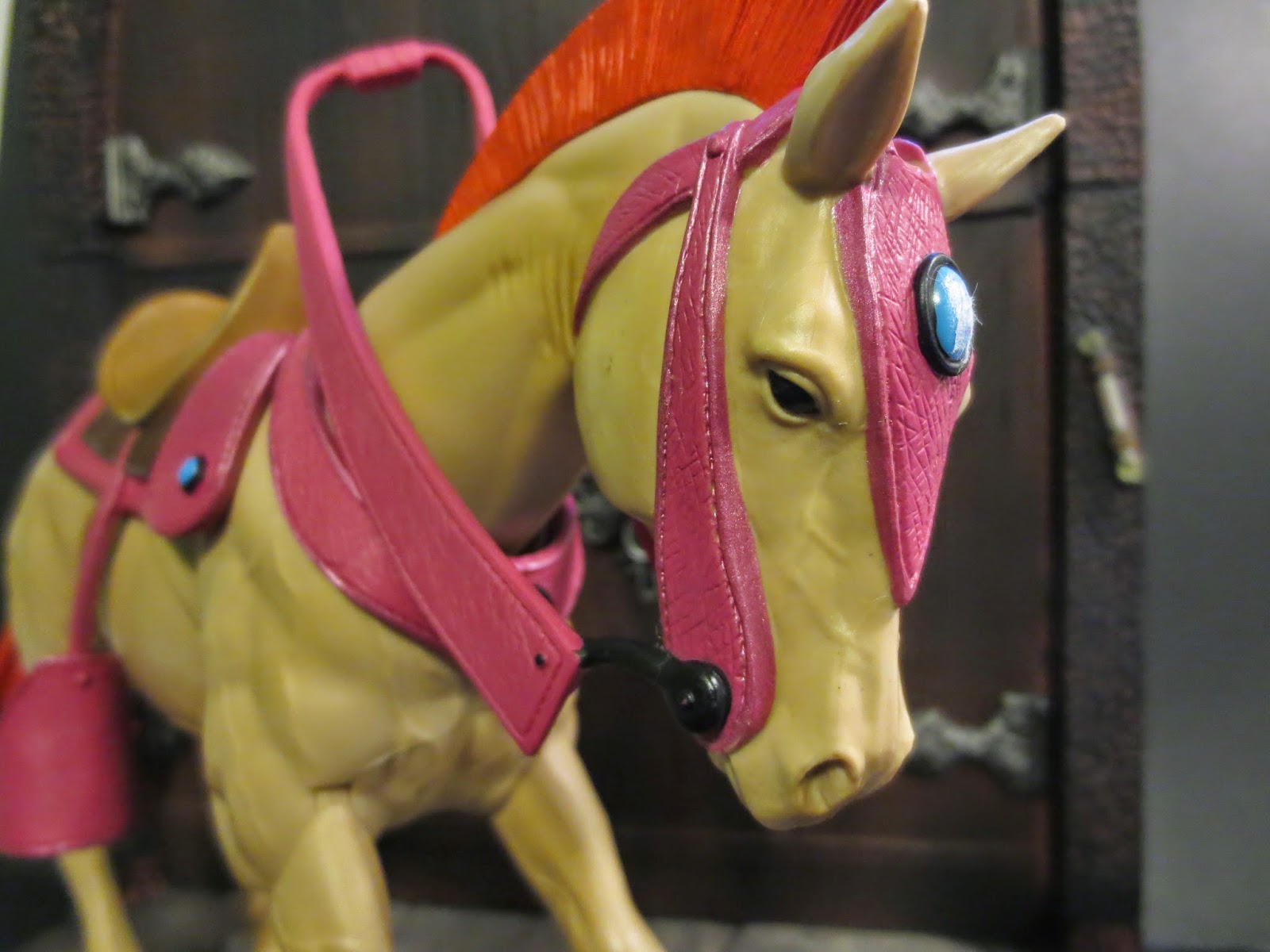 Whether you subscribe to an action figure line (like Masters of the Universe Classics) or simply make the decision to be a completest, sometimes there are figures that you just can't get excited about. For MOTUC, that's been pretty rare for me. Even figures that I've been slightly less enthusiastic (Nepthu, Sir Laser Lot,The Unnamed One) have still been fun action figures that added a new character or archetype to my display. Today, though, I'm looking at the newest oversized "beast" release from MOTUC: Arrow.  To say things as succinctly as I possibly can, I'm pretty sure Arrow is only in this line because Mattel need to reuse the horse sculpt again that they created for Swiftwind. He's just an absolutely boring figure. Arrow was released in the vintage Princess of Power line, but it is his appearance in the Filmation She-Ra animated series that this figure is derived from. Here's a quick look at Arrow! 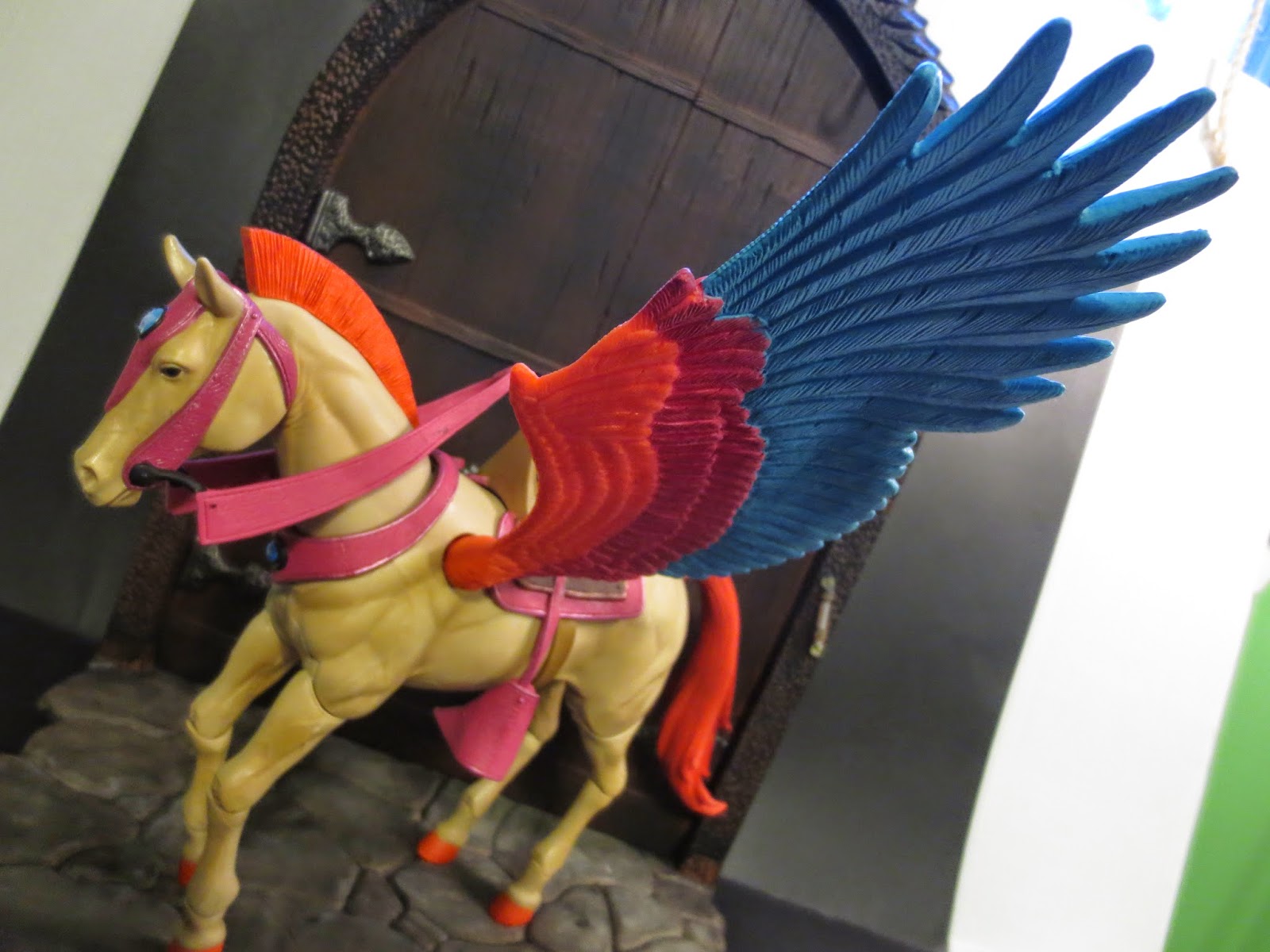 The Facts:
Height: Arrow is about 9 inches tall from hoof to ear and nearly a foot long from the tip of his tail to the point of his nose. 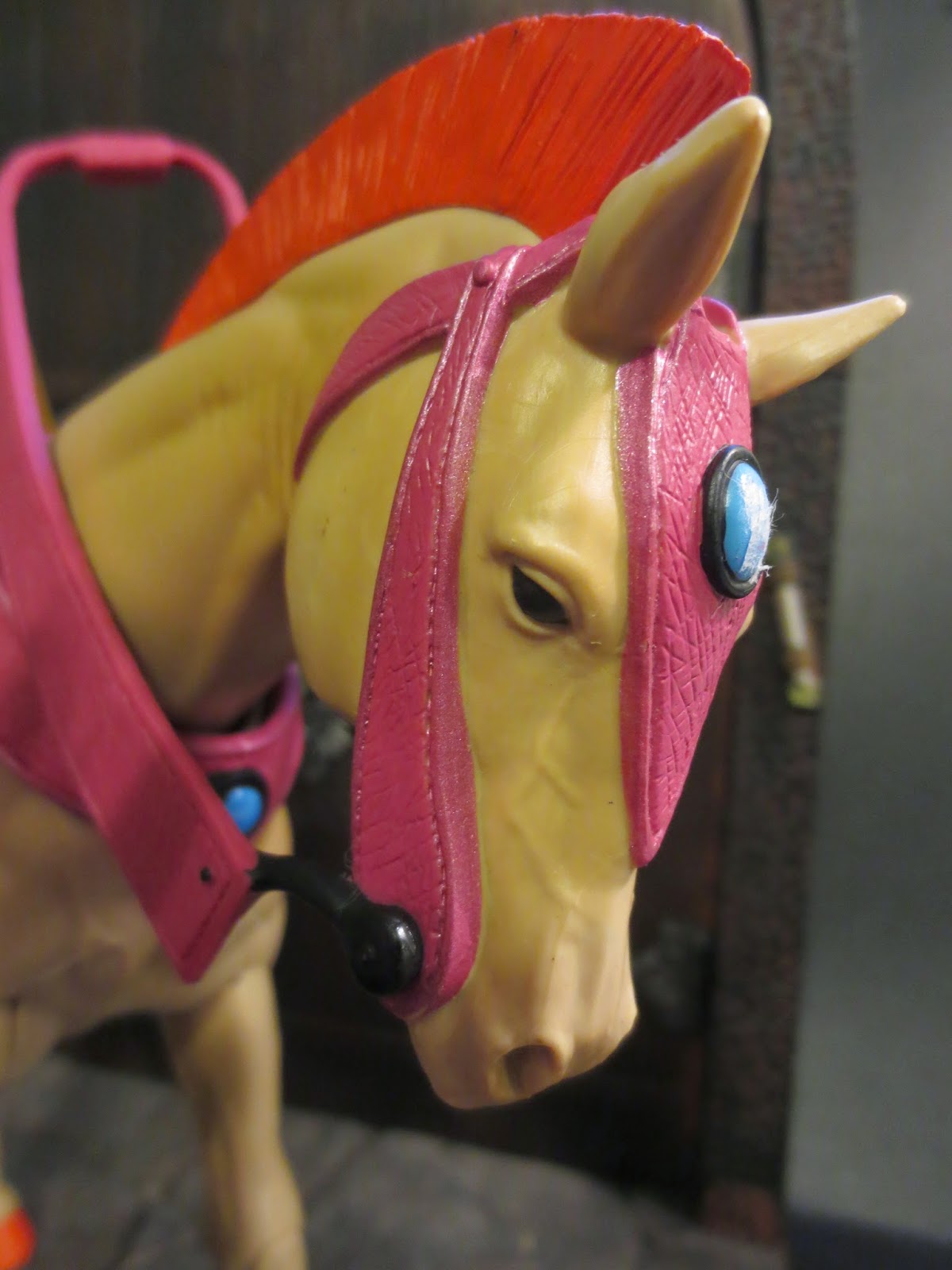 *The head and body sculpt on Arrow is pretty solid. Arrow looks like a real horse and features visible veins, muscles, and musculature. The head is very realistic and features a calm, passive look that wouldn't look out of place on a horse in a horse calendar. The hooves are well detailed as well, even featuring little cracks.

*The articulation on the tail, head, and neck really allows for some expressive posing. I love the way the head and neck were designed to allow for the minor changes in expression that can be conveyed through subtle shifts in the position of an animal's head. 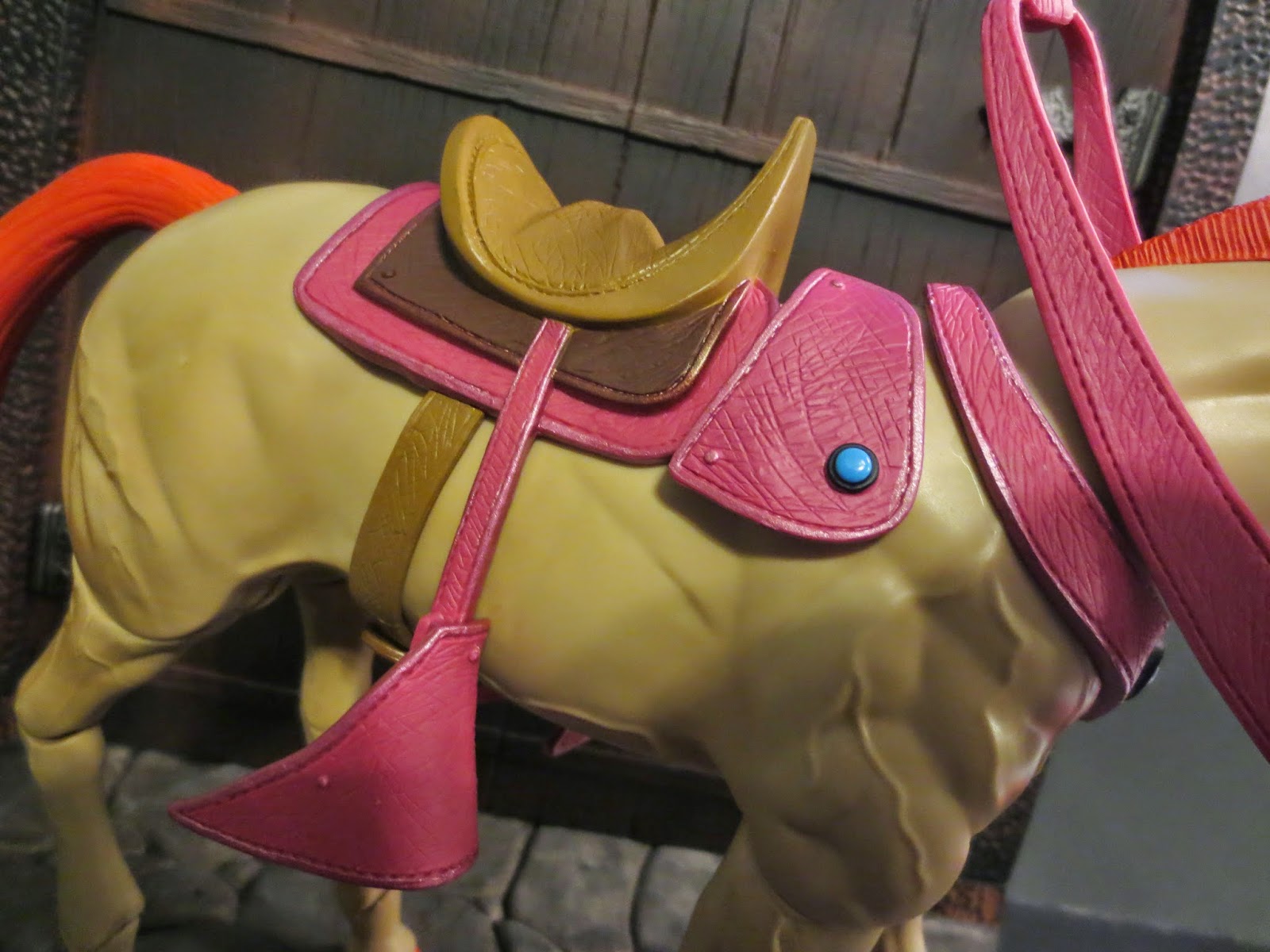 *OK, so my intro made it clear that I'm just not thrilled with this figure. First of all, I just do not like this color scheme. I know that it is fairly accurate to the cartoon, but it's just so garish! It doesn't work very well when applied to a real life object. I'm completely OK with bright colors. I'm a big fan of the designs of the majority of She-Ra: Princess of Power figures. Heck, I collect the Funko My Little Pony: Friendship is Magic vinyls and those are more subtle than this guy. The combination of Arrow's realistic tan color with the extreme brightness of everything else, though, makes this guy just useless as a standard horse for any other characters in the line which at this point in the line is probably what would have been better received. 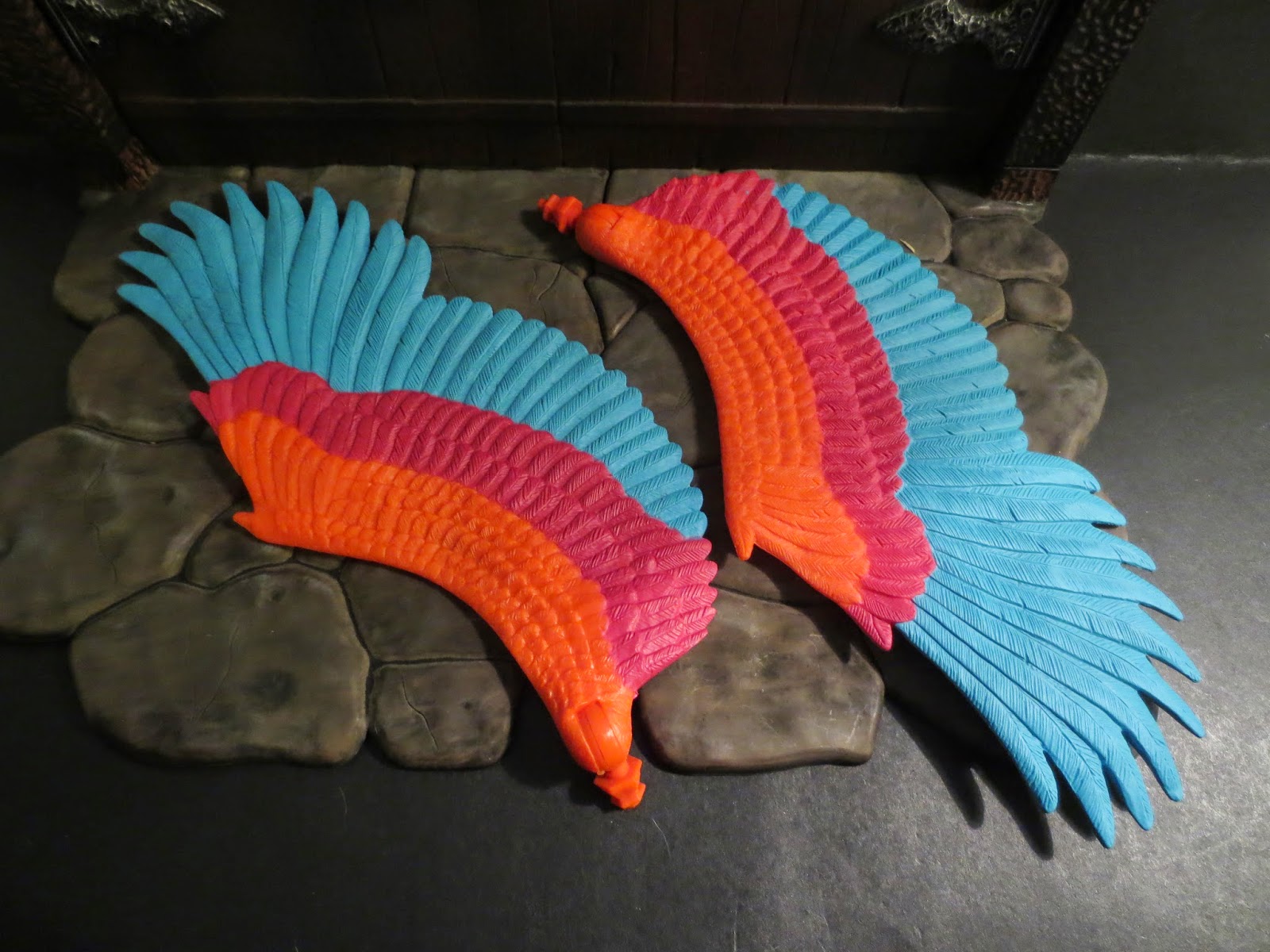 *Arrow doesn't want to stand up properly. Swift Wind kind of had this problem, too. Arrow's always tipping over and I'm afraid that one of these days Rio Blast is going to just shoot him.

*The vintage Arrow had wings (of course, he was also blue) while the Filmation Arrow didn't. To rectify this, Mattel packaged Arrow with two removable wings and two removable shoulder covers that fit into the hole where the wings plug in. This is a great idea but unfortunately I can hardly get the darn shoulder covers out. Granted, I wanted to display my figure without his wings, but I can't even get the right wing cover out. I was afraid of breaking the figure! Not sure what could have been done better, but this is a bit of a miss. 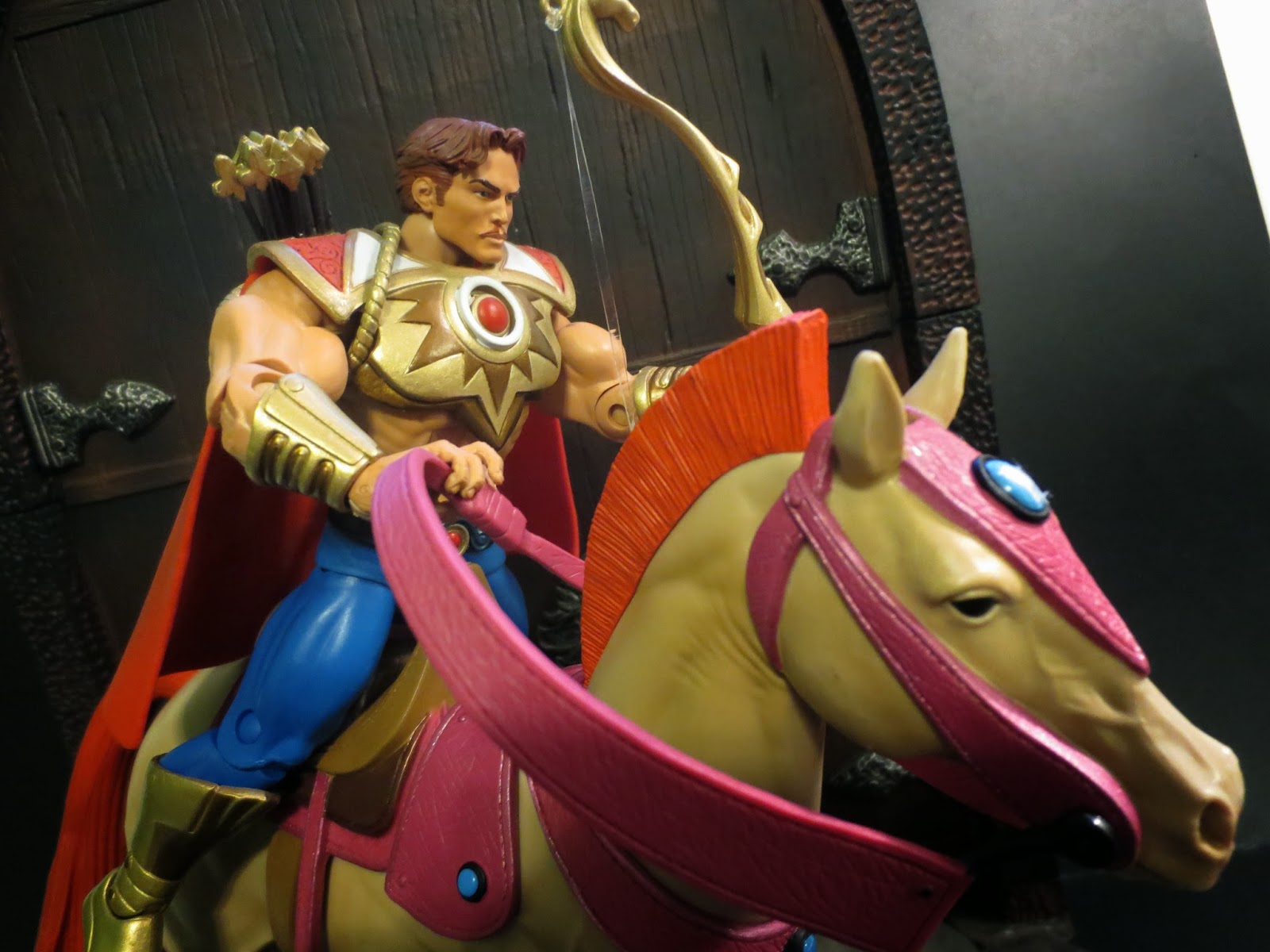 In a toy line with around 200 releases, there's always going to be a figure that leaves you cold. Arrow is mine. I'm sure some fans have been waiting for Arrow since MOTUC was announced but I can't help but feel that he's just unnecessary at this point in the line. I would much rather have had Teela's charger or another more generic horse that could be used for a variety of figures in the line. As it is, Arrow's pretty much a one trick pony that looks like he was graffiti bombed by Lisa Frank. I'm giving him an Eh because that's how I feel about him. Simply Eh.
Posted by Barbecue17 at 12/16/2014