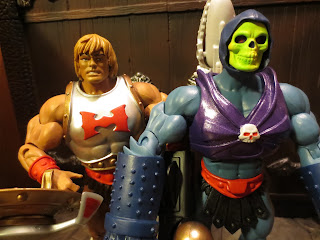 As I said during my Perfuma review yesterday, this year Masters of the Universe Classics has been all about finishing the vintage Masters of the Universe lines. While Princess of Power is only getting the unique figures completed (no variants), Masters of the Universe is getting every figure redone, including all of the He-Man and Skeletor variants. Today I'm looking at the 2015 fourth quarter oversized set:The Terror Claws Skeletor and Flying Fists He-Man two-pack. Based on two variants released in the vintage line in 1986, this set gives us another version of He-Man and Skeletor. I'm going to say right up front that I'm not a big fan of this set. I've really liked most of the He-Man and Skeletor variants that have been released (they've been some of my favorite figures in the line) but this set really feels rather weak. Instead of doing anything to escalate the original designs and improve on them in anyway, this really feels like nothing more than a rehash of some vintage figures that just weren't that exciting. Read on and find out why this set really isn't worth your time after the break... 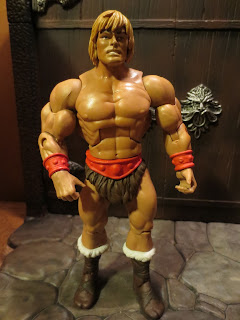 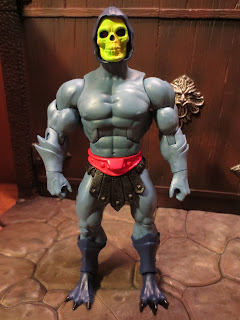 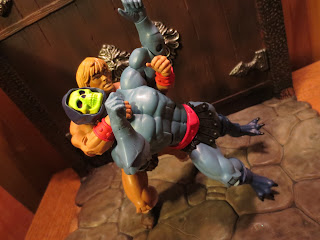 *As is typically the case with MOTUC figures, these two guys are sturdy and fun to play with. When you take off the basic armor Skeletor and He-Man are two of the most basic figures you'll find in the line. Still, they're fun to play with. 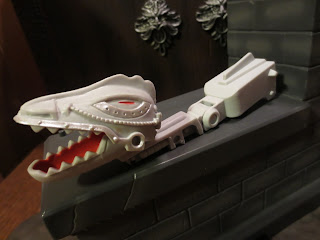 * I do like this weapon that looks like a robotic dragon skull of some kind. It actually has a few nice paint applications on it and seems like a bizarre but interesting addition to Skeletor's arsenal. It fits over his hand (there's a handle inside) and there's a hinge at the base of the neck and on the jaw. 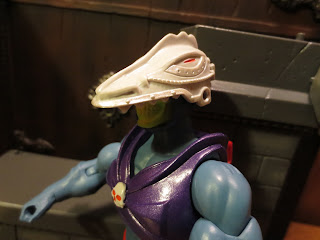 * The top of the robotic dragon head is removable and it looks pretty awesome on Skeletor's head. I don't believe this is an intentional feature at all, but I like it. It definitely it much more interesting than anything else about this set. 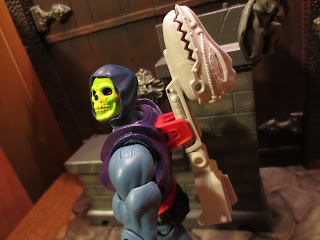 * It is kind of cool how the dragon weapon stores on Skeletors back. I wish it had an extra joint on it's neck so it could lean forward a bit, but it's still looks kind of neat on display. Seriously, this piece is my favorite part of this entire set. 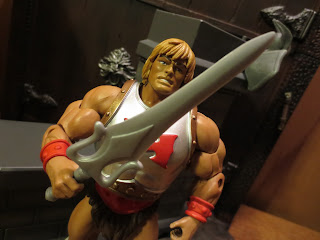 * He-Man comes with his Power Sword (something I don't think the vintage figure came with) and it's molded in more metallic looking plastic than the standard gray version. I'm always a fan of the Power Sword and getting another one is A-OK. 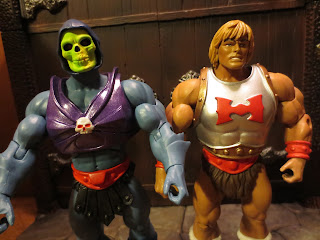 *Even knowing that these are based on vintage toys, I just do not like these designs. They're both really unattractive figures with little to no redeeming value. They're just blah. They really feel like desperate, gimmicky toy variants that can't stray far from the original source material but can't look too similar, either. These guys flat out suck and Mattel did nothing to improve them here. 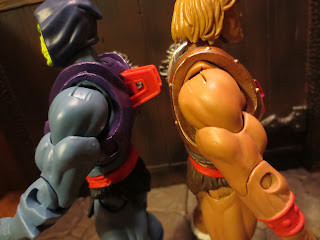 * Thick armor returns! Again, the armor on these guys just looks thick and puffy. I'm not sure what happened to the plastic armor from the Battle Armor figures, but I'd have much preferred that over what we got here. The only positive thing I'll say is that I'm really glad that Mattel didn't use vac-metal on these. I know the vintage figures had it but it looked cheesy there, too. I learned my lesson about Matty's ability to vac-metal properly with Hurricane Hordak. Never again. 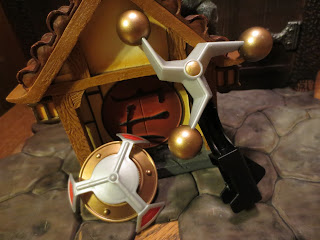 * While He-Man comes with both of the weapons his vintage figure came with, I really just don't care for them. Not only are they kind of bland but they're oversized and just feel sort of goofy. Maybe it's that these bring back memories of the ridiculous variants that led to the downfall of the 200x line, but I really wish Mattel had done something more with these to make them a bit more appealing. I want to see enhanced versions of the original designs when it makes sense, and this is an area where it would have made perfect sense. 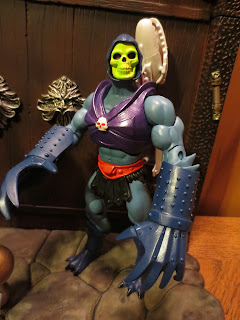 * Take a look at Skeletor here. Now look at his vintage figure here. What's wrong? His waist-piece is incorrect. See, here's my problem: If Mattel had been trying to put some cool improvements into this figure, I wouldn't mind at all if they made some changes. Figures in this line that have had some cool updates have been some of the best figures made. For them to make this figure almost identical to the vintage figure, however, and then mess up something like this just seems rather silly, don't you think? I mean, did they consciously make a decision to change nothing about this figure except the waist? What gives? 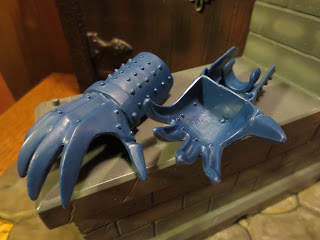 *Last, but not least, let me harp on Skeletor's terror claws. His titular accessories just flat out stink. They're hollow, underdetailed with no extra paint apps, and the only clip on at the wrist. Rather than turn these into a cool, fearsome weapon, these really just feel like larger version of the vintage toys. This to me just summarizes this set: It feels like it was created just to fill a hole in completing the vintage line and not because there was any cool inspiration going on. 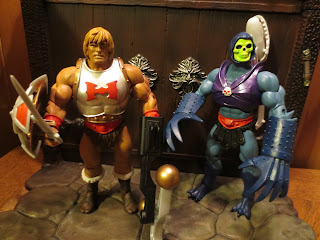 I really just don't like these figures. The accessories are oversized and cheap feeling (except for the cool dragon and the Power Sword), the armor is crummy, and the designs are awful. The only reason these were made and the only reason I own these is because it moves us one step closer to having a complete vintage MOTU collection within MOTUC. Mattel knew that, though, and they really just went through the motions here. These are the very definition of an Eh set. More like meh, but that's not one of my ratings.


I've reviewed a few other He-Man figures: Galactic Protector He-Man, King He-Man, Snake Armor He-Man and Battle Armor King Hsss, and a MOTUSCLE set with He-Man, Teela, & Man-At-Arms.
I've not reviewed any other MOTUC Skeletors on here (though  own all of them) but I have reviewed the MOTUSCLE set with Skeletor, Beast Man, & Trap Jaw and the SDCC Exclusive Purple Skeletor & Skeletoken.