Action Figure Review: Horde Prime from Masters of the Universe Classics by Mattel 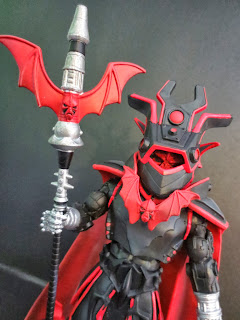 Note: The staff shown with Horde Prime in many of these pictures was originally cut from the figure as released on Mattycollector.com. It was later released with the Great Unrest weapons pack.

Horde Prime was released on Mattel's own Mattycollector website on June 15th, 2012 as a monthly figure. Originally intended to be the yearly subscription bonus figure, Horde Prime was bumped to allow Shadow Weaver to take the place of the yearly subscription bonus. If you're not familiar with the appearance of this character, it is because his visage was (mostly) created for this line. The leader of the Horde Empire, Horde Prime relates to Hordak in much the same way as the Emperor related to Darth Vader. Also like Darth Vader communicating with the Emperor, in the cartoon series She-Ra: Princess of Power Hordak communicates with Horde Prime, who appears as a giant being behind a cloud of smoke and shadow. All we can see of Horde Prime are his massive gauntlets and the vague outlines of a head (or helmet). Since Horde Prime (possibly Hordak's older brother) never had a concrete appearance in the cartoons, minicomics, or toyline, Mattel allowed the Four Horsemen to create their own design for Horde Prime. Since the design they came up with is pretty spooky, he's being introduced here for 31 Days of Toy Terror. Enjoy! 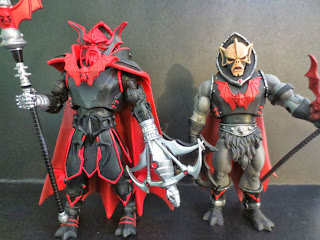 While he retains some elements which could be glimpsed through the obscuring smoke Horde Prime is very much a unique creation. Designed as a standard figure (not a giant) Horde Prime seems to function much like the Emperor, the Adversary from Fables, or the Wizard of Oz in that Horde Prime seems to be a fairly regular sized being who uses various means of projection to make himself appear larger than life. How does this new take on a character who existed only in our imaginations fare? Quite well, but read on for the nitty gritty details: 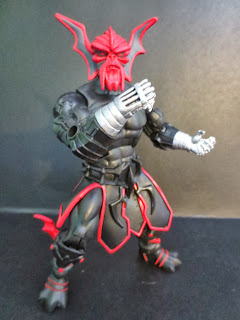 Positives:
+ I love the color scheme. Black and red look quite good together and really have been the Horde's distinctive color scheme. The extra silver pieces just go ahead and knock the appearance out of the park.

+Horde Prime has some really unique parts that are excellently sculpted: His helmet looks quite menacing when on (and vaguely resembles the outline of Horde Prime seen in the She-Ra cartoon). His hands are also excellent and very unique. 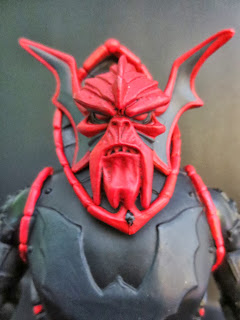 +Not only are the hands unique, but they're both removable. Both hands can be removed to allow Horde Prime to wield his crossbow or any other MOTUC weapon that attaches to the wrists (like Roboto, Trap Jaw, and Hurricane Hordak's accessories).

+Horde Prime comes with not one, but two head sculpts. The first head sculpt is excellent: it vaguely resembles Hordak himself, but appears to be older with longer features, large batlike ears, and is red and dark grey. I love it! The second head is based off of Horde Prime's appearance in the UK Masters of the Universe comics and is a light grey skinned head sculpt with drooping "whiskers" and a orange helmet with antennae. It doesn't look great on the body, but it is a cool extra. 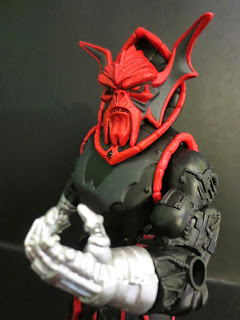 Negatives
-Horde Prime has lots of little details that look like they should have been painted. In fact, early press shots of the figure had those details painted silver, but that didn't make it into the final figure. Those probably would have made a good figure into a great figure. Horde Prime's chest is also really dull. He needed something there to spice up the figure more.

-Horde Prime has "bat" ears on his boots that have a tendency to come out of the package warped. This can be fixed via various methods or seem to correct themselves in time, but it is a little annoying. 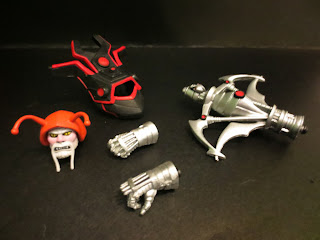 Conclusion: I really like Horde Prime. While its hard for me to think of someone being bigger and badder than Hordak, Horde Prime can nicely fill that role. While some detail elements were dropped from the figure, the staff that was dropped from the original figure was made available to fans in a weapons pack that was released last year. I think he's a perfectly creepy blend of vampire like creature and alien overlord, perfect for Halloween!