Action Figure Review: Camo Khan from Masters of the Universe Classics by Mattel 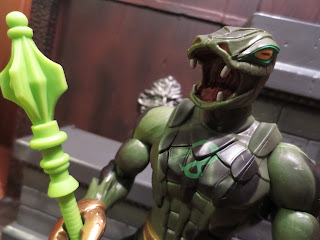 Today I'm looking at the second figure in the trio of Power-Con exclusive figures: Camo Khan! More than just a simple repaint, Camo Khan actually features parts from different figures to form a new creation that rather faithfully matches the Kobra Khan Camuflado figure released by Top Toys in Argentina back in 1987. As I said in yesterday's review of the Blood-Red Beast Man, a rare foreign variant is a pretty good selection for a convention variation. Also, the organizers of Power-Con allowed any fans to pre-order these and have them delivered directly to their homes. They charged the standard entry-fee for the con to help offset some costs but they also sent out a con badge and six beautiful art prints out which I think is more than fair. The figures were a bit pricier than your average Masters of the Universe Classics figure ( and there was a bizarre no exchanges policy that didn't inspire a whole lot of confidence) but considering how limited the run was and that these were created for a fairly small convention, the price doesn't seem too unfair. Ready for a closer look at Camo Khan, the Evil Camouflaged Master of Snakes? Then join me after the break... 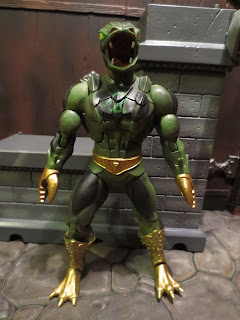 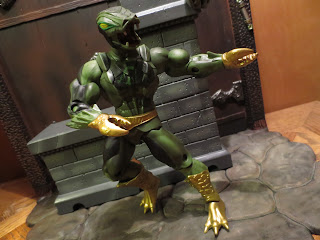 *While many collector targeted lines have improved their articulation greatly over the eight years since MOTUC debuted it's still a pretty good articulation model. This feels like a quality figure with nice, tight joints. These guys are still really fun to play with and I have no problem with them. 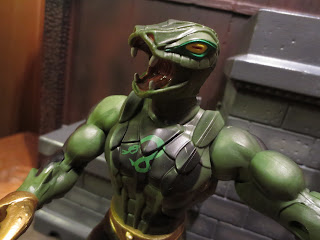 * First of all, Camo Khan looks as amazing as the original Kobra Khan figure from MOTUC looked. His eyes are really sinister, his fans look memorizing, and he has a great scaled body sculpt that I just love. Secondly, he has the Snake Men logo on his chest. This is cool because the first release of Kobra Khan is actually listed as an Evil Warrior. This guy can fit in perfectly with your Snake Men collection so you can put Kobra Khan with Skeletor's crew. Word. 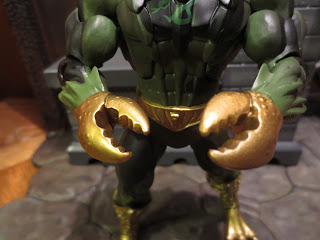 * Gold claws. Camo Khan has gold Buzz-Off claws. These things are gilded, nasty looking, and probably cost quite a bit of money. They're also one of the more unique elements of the original vintage Kobra Khan Camuflado figure, so it's nice to see them here. If Auric Goldfinger and Lady Slither had a baby, it would have hands like Camo Khan. 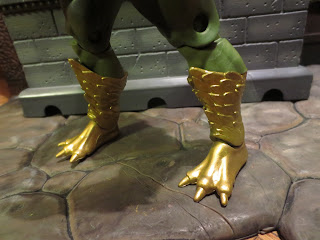 * Camo Khan also has gold clawed feet. Again, this is done to recreate the vintage Argentinian variant, so it works. Green and gold, huh? I gotta admit, I just love the way this looks on ol' Camo Khan. It's so bizarre but almost equally incredible. It's like a standard Snake Man figure if he were an exclusive to Kirkland's. 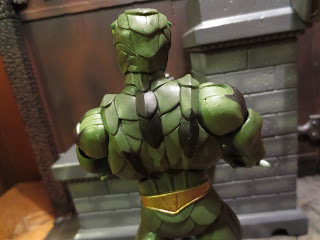 * Not only is Camo Khan covered with dark camouflage blotches but he's also a much darker shade of green than the original Kobra Khan. It's a great look that separates him nicely from the first figure and captures the cool camouflaged theme. This guy really looks like he could hide in the woulds and be nearly invisible. If Hit & Run and Pythona from G.I. Joe had a baby, it would look like Kobra Khan. 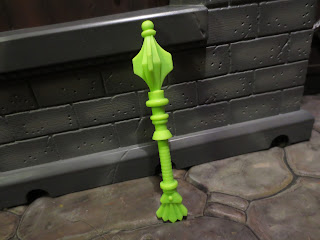 * Camo Khan comes with the Clawful mace, which is accurate to the original vintage variant (he has also been found packaged with a brown mace and Buzz-Off's axe). Unfortunately, it feels a bit light as the only accessory. I would have loved to have received the alternate head the standard Khan was packaged with or a camouflaged Snake Men too. The mace also feels a bit flimsy and has stress marks out of the package. Not sure what the deal there was. 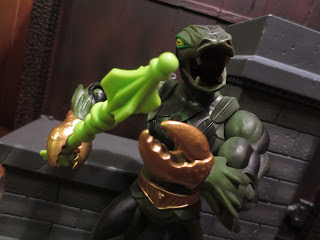 I really like Camo Khan. He's a great addition to the Snake Men army, fills a nice niche in the line (he's the Snake Men version of Kobra Khan, leaving regular Kobra Khan to hang out with the Evil Warriors), and does a great job at capturing a vintage international Masters of the variant that many fans would never have the opportunity to own. I really like him and although he feels a bit light, he really feels like a figure that some great effort was put towards. He's a Great figure and another nice addition to the MOTUC shelf.


I haven't reviewed any other Kobra Khan figures on here but I have reviewed plenty of other Masters of the Universe Classics figures: