Action Figure Review: Ceratus from Masters of the Universe Classics by Mattel 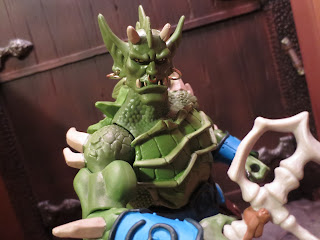 I've been a bit behind with all of my Halloween reviews from last month and my WWE reviews leading up to Survivor Series 2015 but I'm finally getting around to looking at the November 2015 Masters of the Universe Classics Figures. Today I'm looking at the fourth figure in the Club 200x subscription, Ceratus. A Caligar, Ceratus is the leader of his people and the brother of Skeletor's henchman Whiplash. While Ceratus didn't have a massive role in the Mike Young Productions He-Man and the Masters of the Universe animated series, he'd definitely a cool character visually. He has a perfect barbarian/ fantasy vibe and looks right at home among the other MOTU heroes and villains. Ready for a closer look at this guy? Then join me after the break... 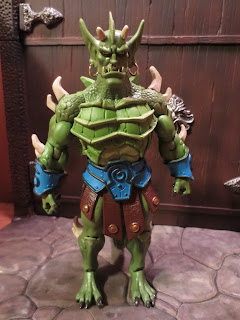 Accessories: Bone club and tail (comes unattached in the package) 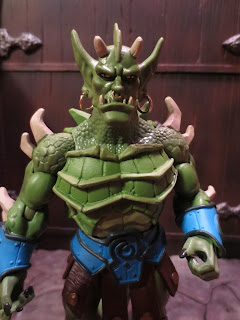 *The sculpt and paintwork is just excellent on this guy. While the first half of the year was really strong for the 2015 Club Eternia subscription, the latter half of the year has been incredibly weak. Fortunately, the Club 200x subscription has delivered every time so far. Ceratus has some really menacing spikes on his shoulders, wicked looking scales, and a really tough-looking mug. I love his teeth, his piercing gaze, and his actual metal earrings. These look excellent and really up the quality of the figure. 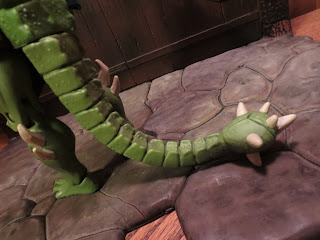 *Like his brother Whiplash, Ceratus has a massive tail that's great for clobbering his foes. It comes unattached in the package and is simply popped into the socket. I really wish it had a ball joint at the top but this is still a cool feature. Little elements really make these 200x figures feel so different (in a good way) from the main line. They add a lot of freshness into the line. 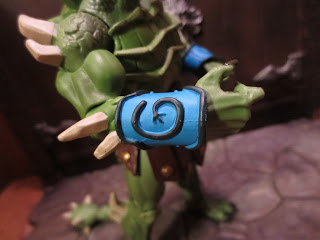 * Ceratus has a great paint job with some cool little details. I love his blue bracers (they match the emblem on his belt) and his loincloth looks awesome as well. it has a great leathery texture to it! I also want to point out that Ceratus has some nice highlights, particularly the highlights on his chest and knees, which make his armored skin really stand out. 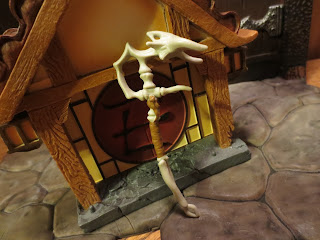 * Ceratus' only true accessory is some sort of a club made from various pieces of bone. It's wicked looking and, for some reason, reminds me of something Cubone or Marowak might wield. (The little one and I are watching through the Indigo League series of Pokemon, so maybe that's why that idea jumped in my mind). This thing is really vicious looking and seems rather menacing as a primitive and brutal bone ax. 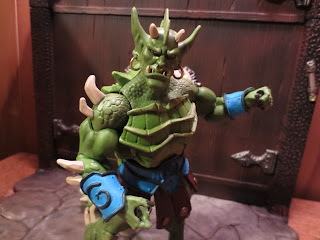 * Ceratus feels very durable, like most MOTUC figures over the past few years, but his articulation is definitely a bit...stiff. His elbows, waist, and abdomen are definitely very restricted by his sculpt and his torso overlay (more on that in a moment). It's not a huge problem, but one I felt worth mentioning considering how good articulation usually is in the line. 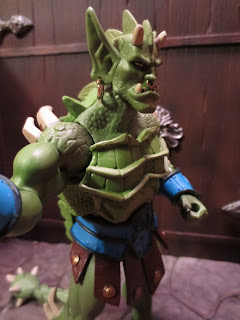 *My second negative is something that caused some of the mobility problems in the first negative: The oversized armor. Some folks call this "fat armor" and it has been a problem in this line for a few years now, probably starting around 2013 with figures like Snake Face, Sea Hawk, New Adventures Skeletor, and Hydron. Ceratus' isn't the worst example of it but if you look at his sides closely, particularly when you have the figure in hand, you can see they're a thicker piece of plastic wrapped around the main torso. The torso wrap is too thick and not tight enough, giving Ceratus a slightly awkward appearance. 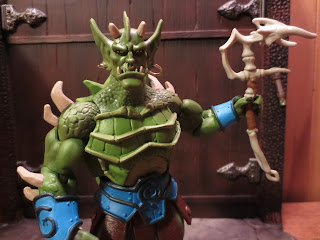 While Ceratus was not one of my most wanted figures, he's a pretty solid action figure and an incredible mixture of design, sculpt, and durability. He does have the dreaded bloated armor of some previous figures but it's nowhere as noticeable on him as it is on other figures. He's a Great addition to the MOTUC line and definitely my favorite figure this month. I'll be covering the other three over the next few days, so stay tuned!

I have reviewed plenty of MOTUC figures on this site, including: