Action Figure Review: Mermista from Masters of the Universe Classics by Mattel 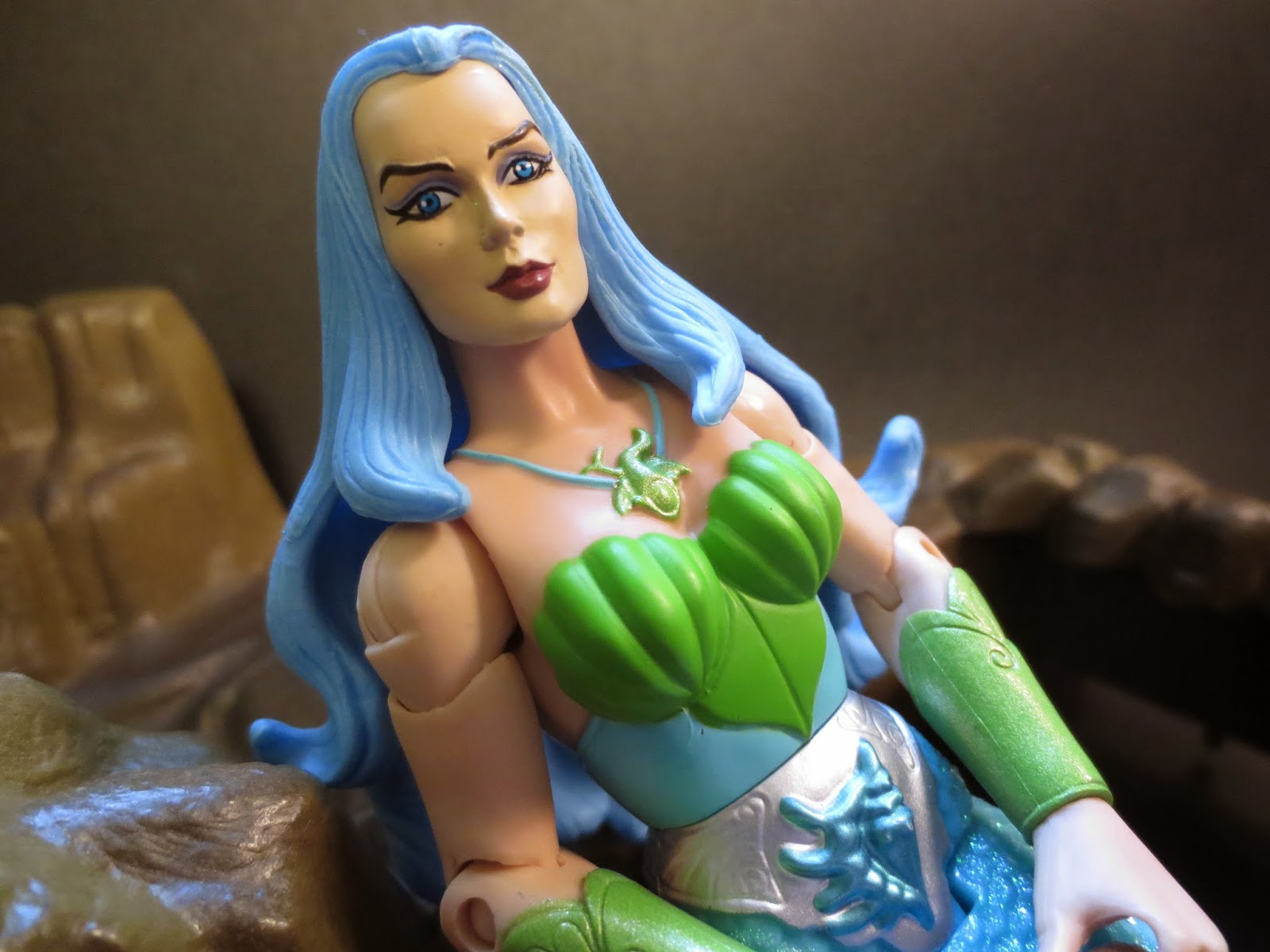 Mattel ended the 2014 Club Eternia subscription's basic figures with a Princess of Power character that everyone seemed to want: Mermista! Mermista appeared in both the vintage Princess of Power line and the Filmation animated series and is one of the few POP characters that largely shares the same look between the toy and the cartoon. Are mermaids your thing? Do you like aquatic warriors? How about conch shell horns or girls with blue hair? If any of those apply to you then you are in good shape with Mermista. More details after the break... 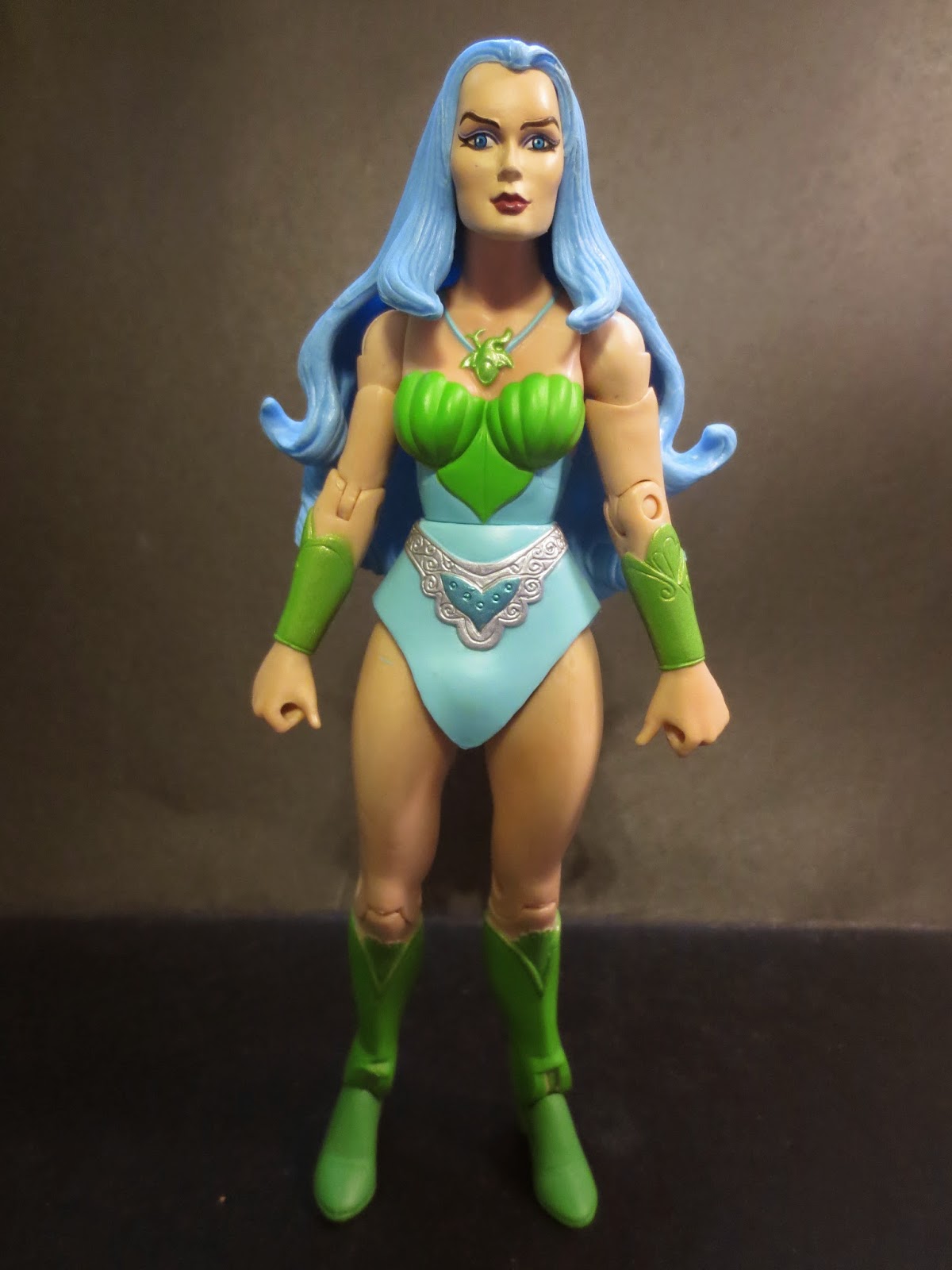 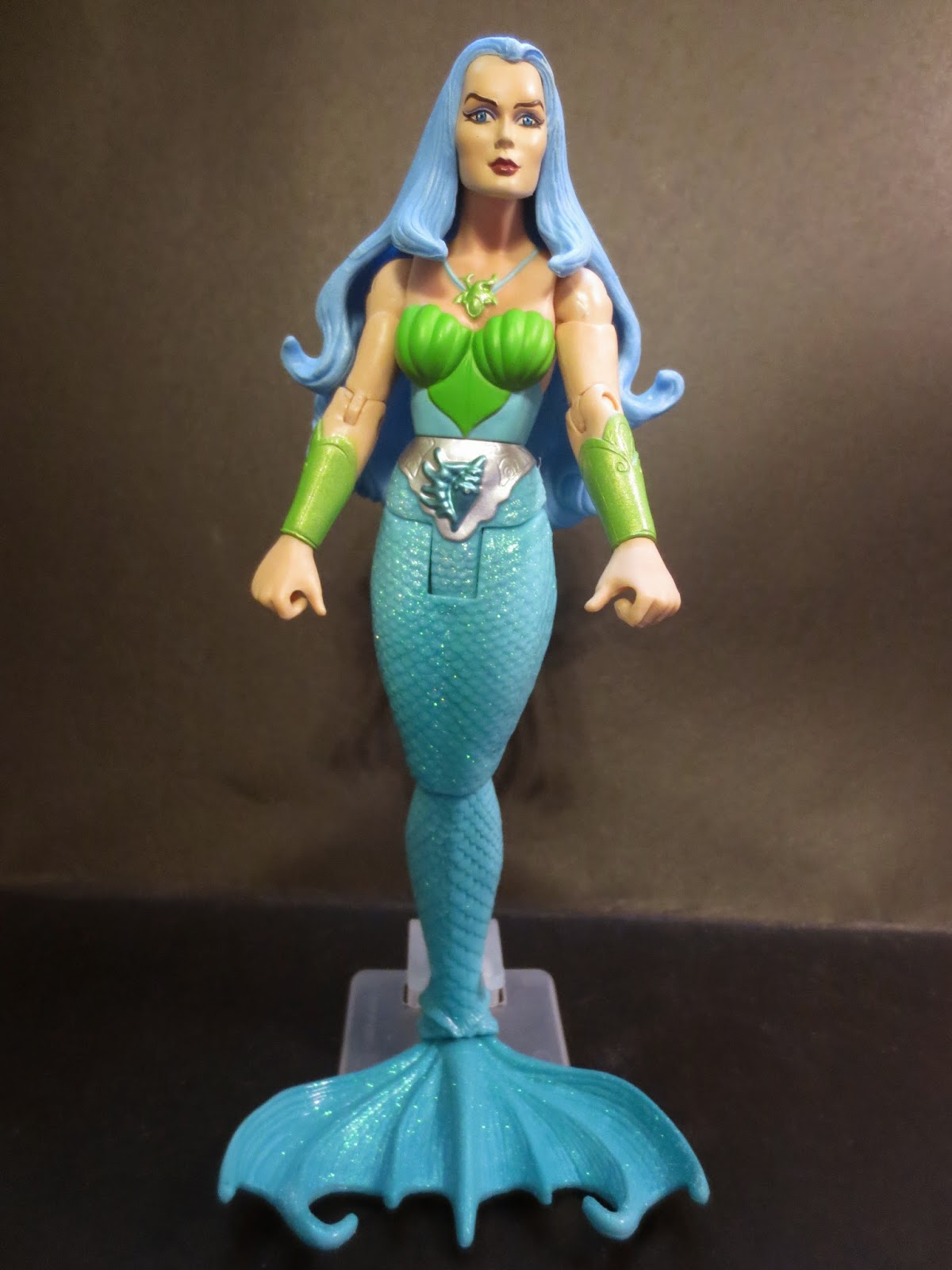 *I don't want to give Mattel any ideas or justify the crazy price on these figures but, considering the fact that Mermista comes with a swappable set of lower human legs in addition to her mermaid tale, I think she feels quite deluxe. The lower halves swap easily and stay on tightly. 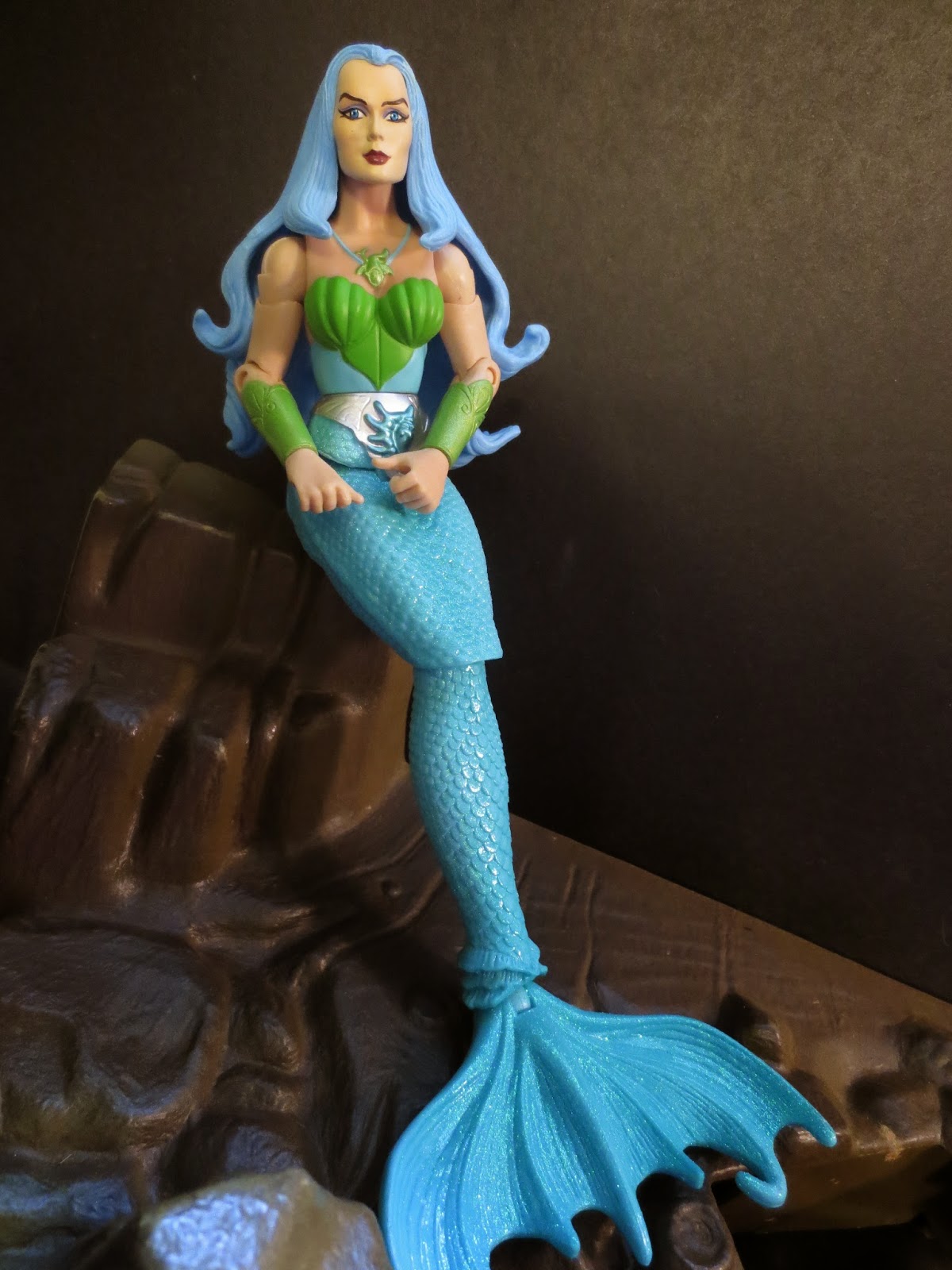 * I love the mermaid tail. It looks really, really good. The sculpt is not only covered with an assortment of scales and fins but it also has a coating of glitter on it. Glitter is better than vac-metal, in my opinion. Not only does it look good, it also is very functional. You can pose Mermista standing, swimming, or sitting on a rock luring sailors to their doom. Granted, she is a heroic ally of She-Ra but she went through a dark spell in the early 90's. The Little Mermaid just pissed her off. 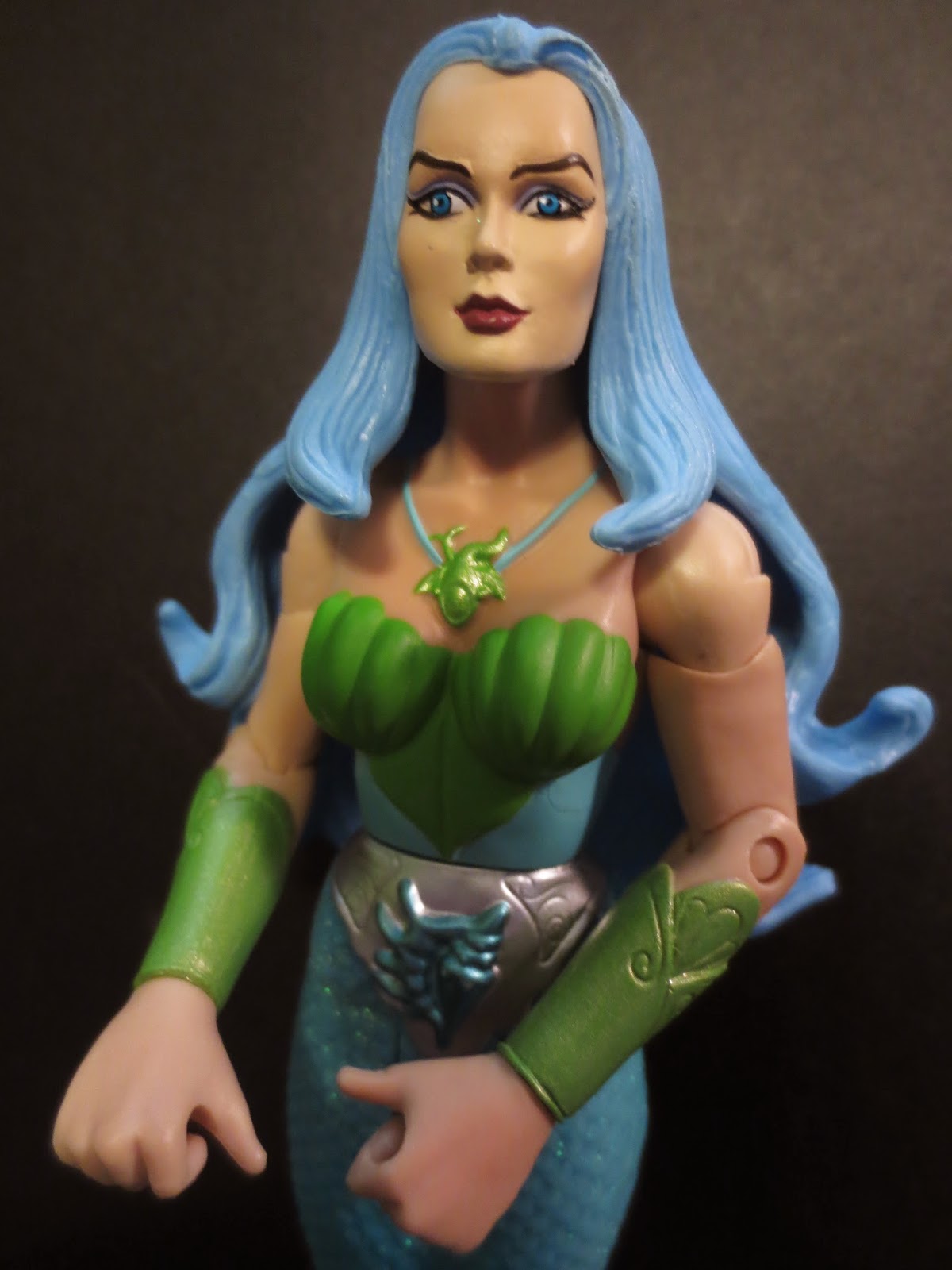 * Let's talk about the headsculpt. I like it, but I can see why some fans don't: It definitely makes Mermista look a bit older than she appeared on the original toy or in the Filmation cartoon. Still, no reason she can't be a bit older than some of the other members of the Great Rebellion, right? The hair looks good and the paint work on the face is quite lovely. Her necklace and seashell corset also are impressive. 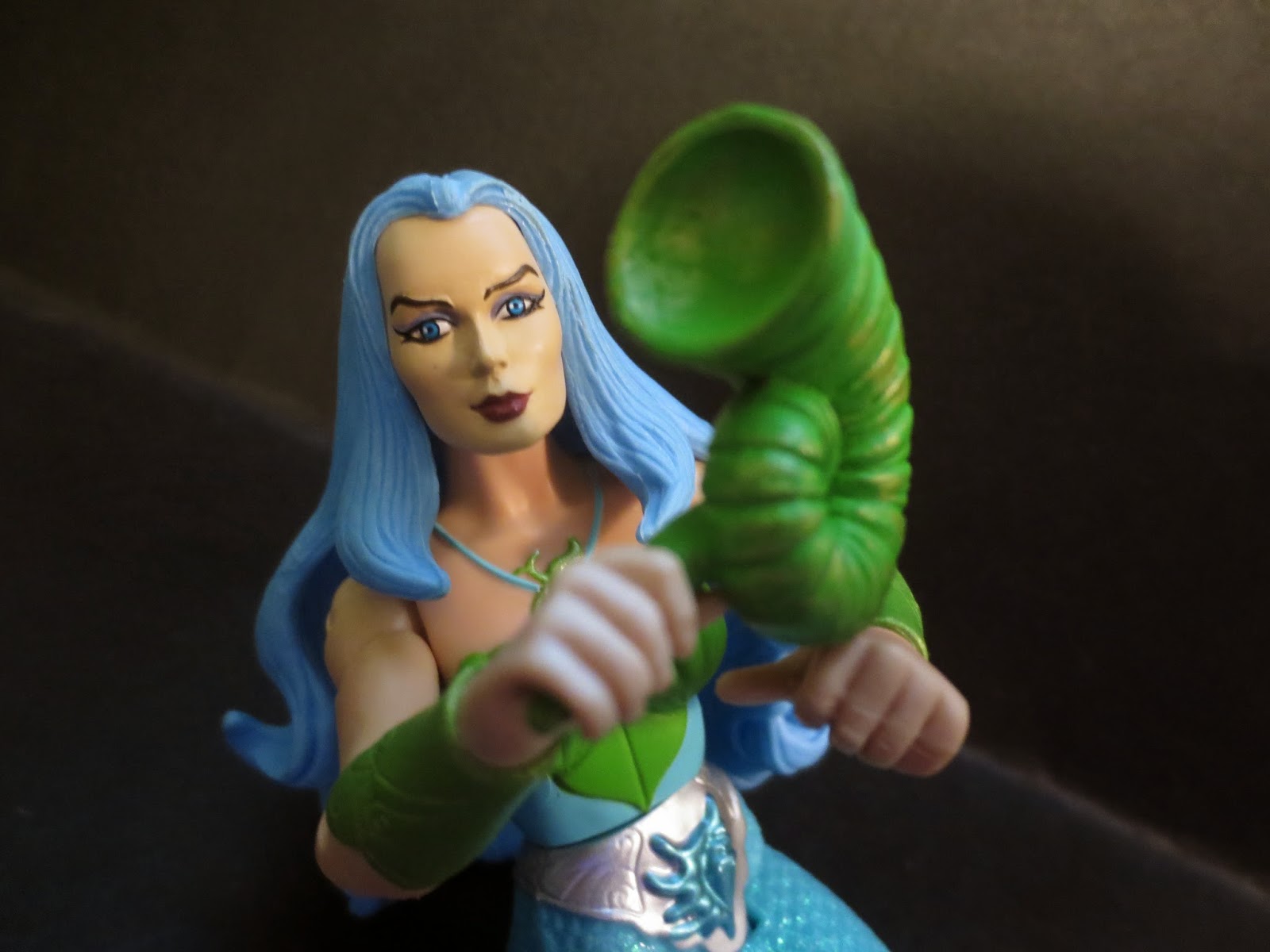 * I'm really digging the conch shell horn. I love accessories, particularly when they're some type of non-weapon or artifact. I like weapons, don't get me wrong, but it's really interesting to get stuff like this shell. Both the shell and the shield have a green metallic paint app over the basic green plastic. They look awesome and the shell is fun for summoning Mermista's underwater allies. 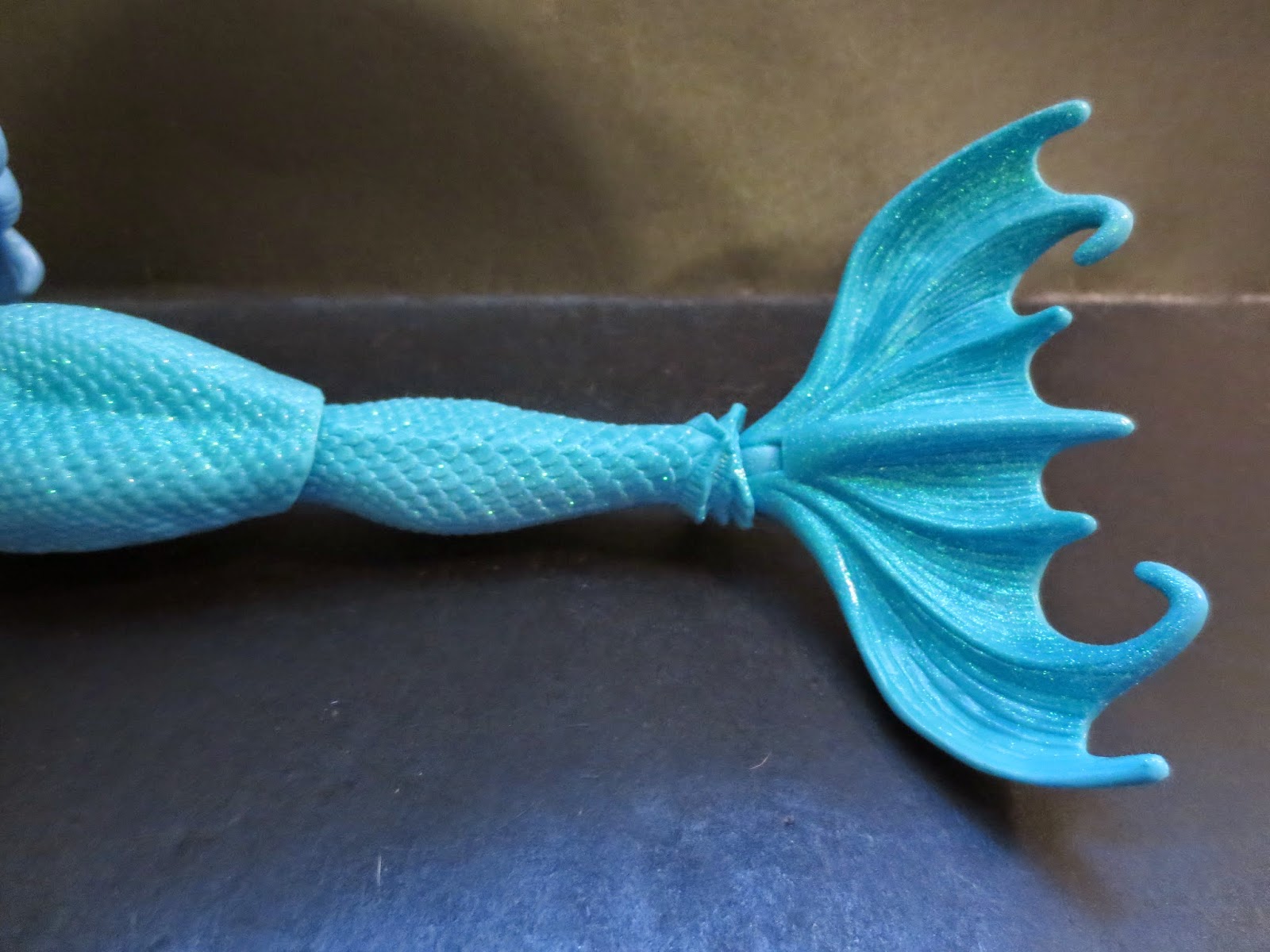 *The stand that Mermista comes with really doesn't work too well. I can sometimes get her up for a minute or so but she tends to fall down. It was a cool idea but that base is too small and the plastic just isn't heavy enough. 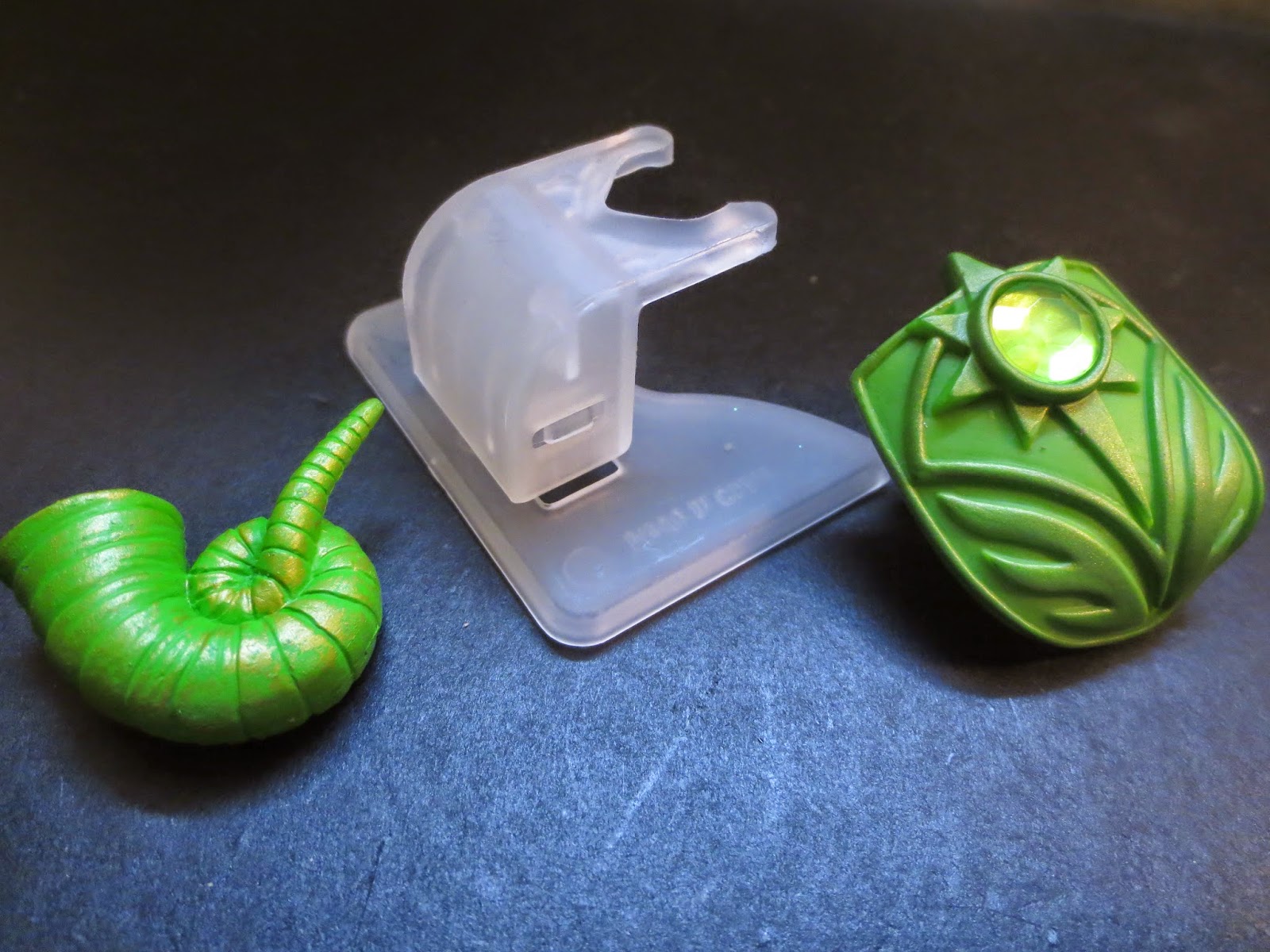 *Mermista comes with the same shield that almost all of the other POP ladies come with, which isn't bad in and of itself. What is bad, though, is that the shield was really, really bent in the package. It's oddly curved, as if it were put into the tray while the plastic was still warm. Not a deal breaker, but a QC issue nonetheless. 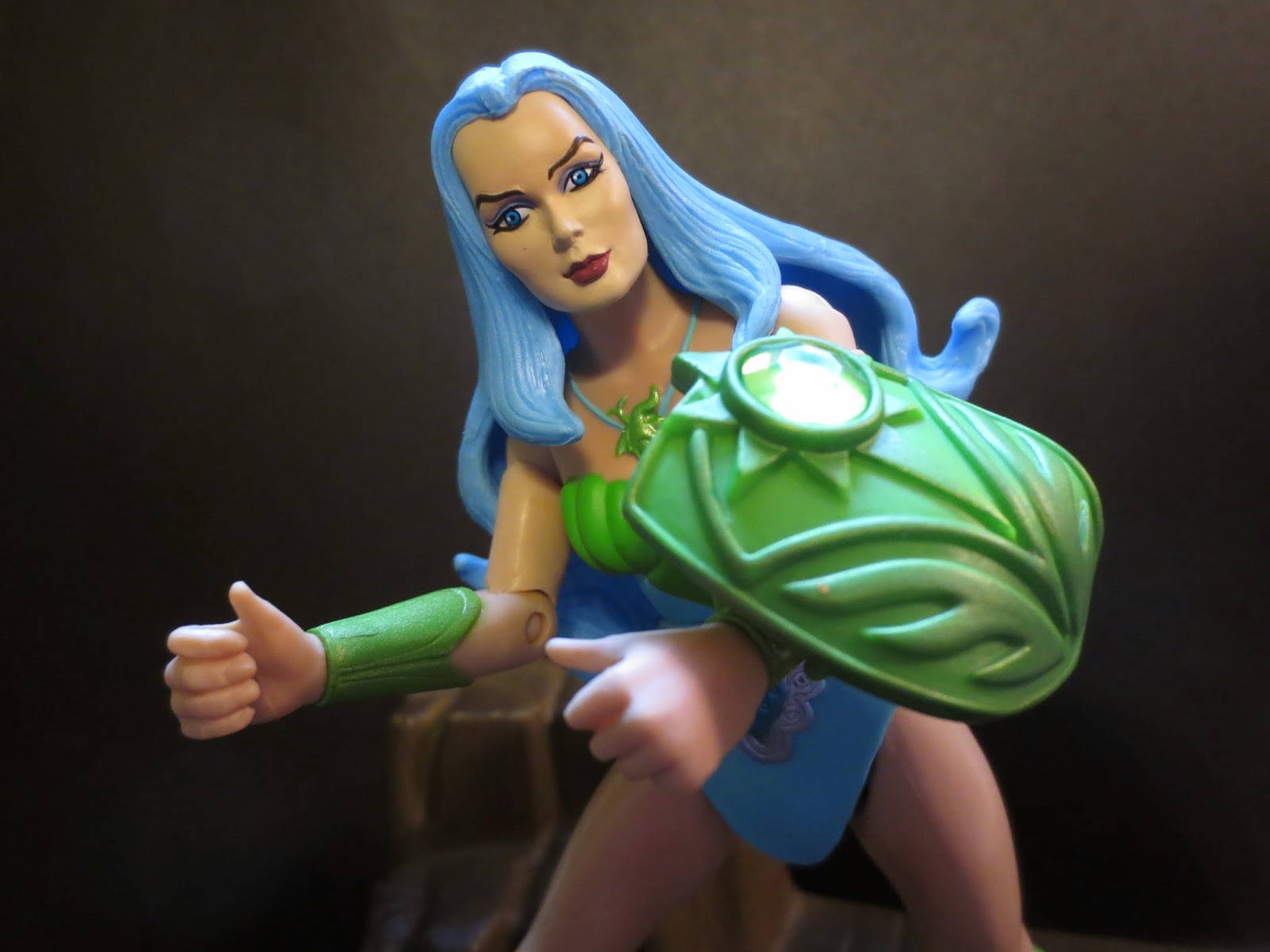 One of my favorite things about Masters of the Universe Classics is the diversity of the characters. How cool is it to have a mermaid warrior to fight alongside the vast variety of other characters in MOTUC? Mermista is a very well executed figure. While the stand doesn't work quite as well as intended, the main feature of interchangeable legs does. While some folks have felt that the POP characters have gotten the short end of the stick for awhile, Mermista is a nice, deluxe feeling figure that seems to get everything right. I'm giving her a Great and a 1/2, even though she did kill Mer-Man. 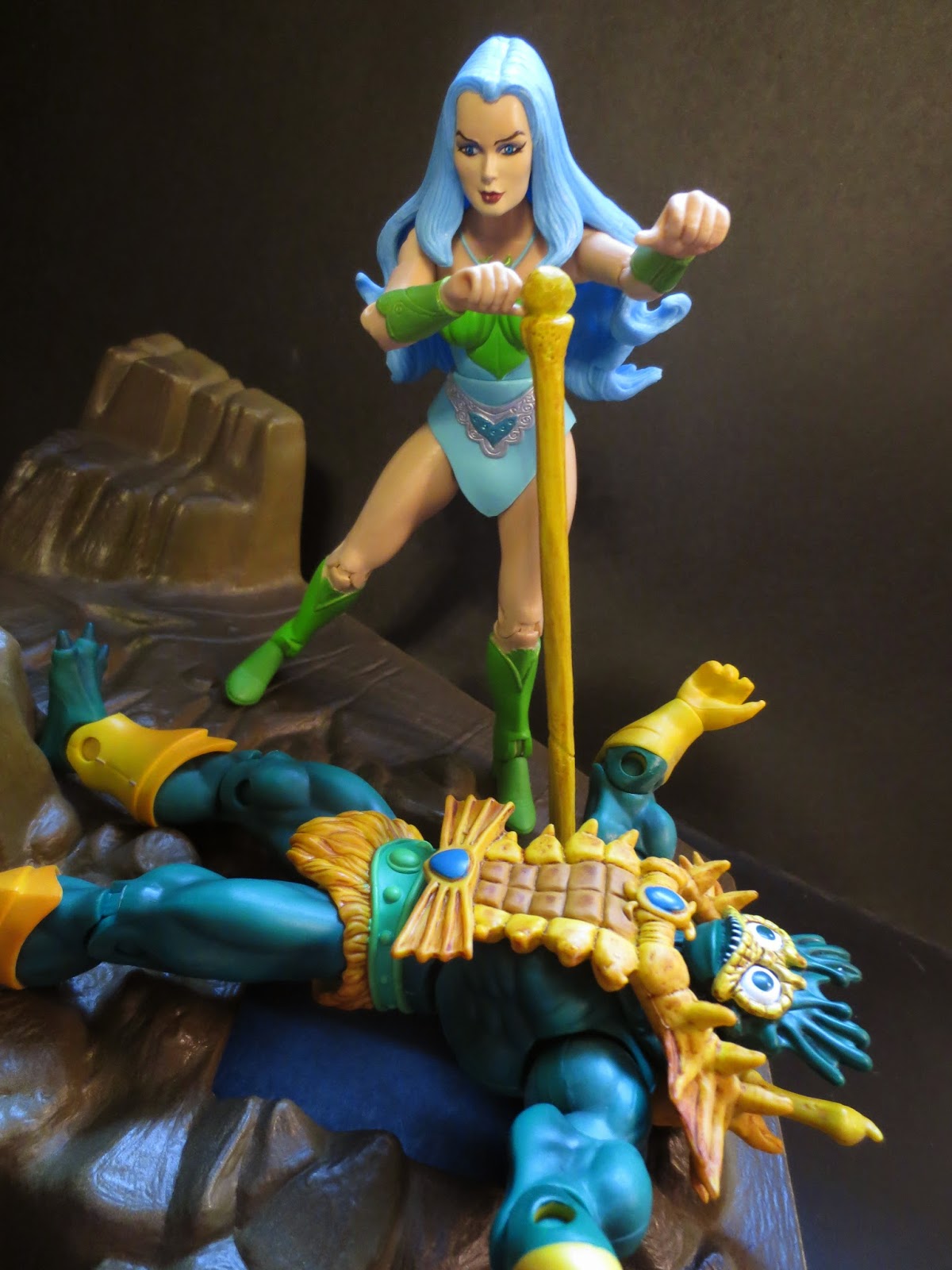 Check out my other MOTUC reviews here on Action Figure Barbecue!