Action Figure Review: Perfuma from Masters of the Universe Classics by Mattel 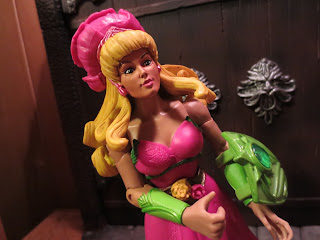 2015 has been the year that Masters of the Universe Classics has focused on wrapping up the vintage Masters of the Universe line and the vintage non-variant figures from the Princess of Power line. It seems like every month or two we have another faction completed and today we have Perfuma, the last member of both the vintage Great Rebellion and the last non-variant member of the vintage POP roster (I have a feeling that Mattel is never going to release Starburst She-Ra and the Catra variants). Perfuma was part of the second series of POP figures (originally released in 1986) and thus, like most of the POP ladies, has both a toy design and a Filmation design. Like with a few other POP figures, Mattel has gone for a blended look. How'd it turn out? Read on and learn more after the break... 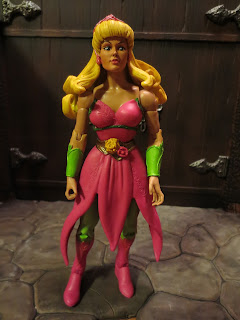 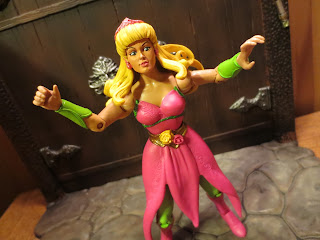 *Perfuma is as well articulated as any of the other female MOTUC figures and feels very sturdy. While there have been some other problems with the line as of late, releasing durable figures hasn't been one of them. Perfuma is still fun to play around with, particularly when you pit her against Hordak. 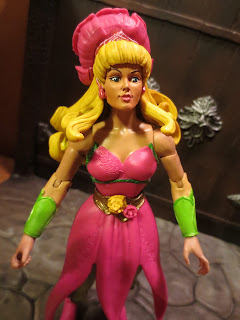 *I'm not entirely happy with the head sculpt on this figure, but I'll get to that in a minute. For now, though, I'll defintiely complement this figure as I love the color scheme and the detail in the sculpt. While Perfuma is a character for whom I prefer her simpler Filmation appearance ( she really works with a sleeker, simpler look) this figure has some great detail including the plant leaves and vines sculpted on her dress, the green leaves surrounding her bodice, and the flowers on her belt. It's a rather nice blending of elegance and simplicity and it totally fits with Pefuma's granola girl image. 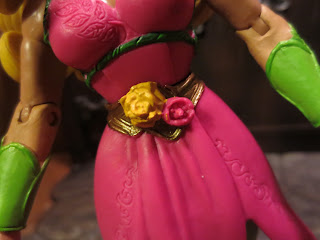 * Like Moss Man and Stinkor before her, Perfuma is scented as well. Perfuma and some of her accessories are actually imbued with an artificial scent. I'm not finding it as overwhelming as some other collectors but it's definitely there. A rose scented figure is just another example of the weird, wacky stuff that makes Masters of the Universe such a fun property. 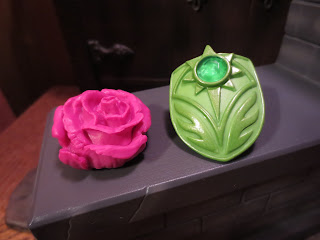 * Perfuma comes with a nice amount of accessories. Her first two are her rosebud hat and her standard issue Great Rebellion shield. The shield is exactly like those that came with other figures, but the Rosebud hat is completely new. It's a bonnet that fits over her hair and gives her the appearance of the Filmation version of the character. It's also scented, by the way. 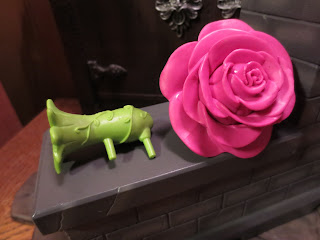 * Perfuma's third accessory actually splits into two separate pieces. It's a plant gun with a giant rose that attaches to it. The plant gun looks cool and fits well in Perfuma's hands. The rose which I guess grow out of the barrel is nicely sculpted and is also scented. 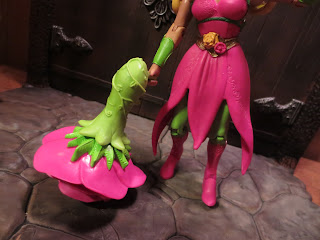 *Unfortunately, the flower gun has two problems. First, it's just too darn heavy with the rose in it. Even if you try to get Perfuma to wield it with both hands it still will cause the figure to tip over. It should have been much smaller. The second problem is that while this flower was intended to pay homage to the growing flower backpack of the vintage figure, there's no way to make it function as a backpack. 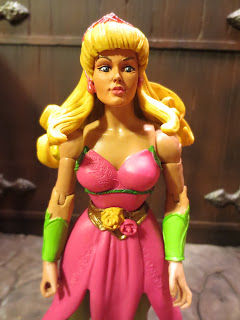 * I praised the detail work and color on Perfuma above but now I want to talk about what I don't like about her sculpt. Her headsculpt just doesn't look like Perfuma to me, neither the Filmation version nor the toy version. Both versions of Perfuma had very slender, youthful faces. While there's nothing really wrong with this face, it just doesn't stand out as Perfuma to me. I'm a bit disappointed as I really do like Perfuma and I've been looking forward to her for quite sometime. 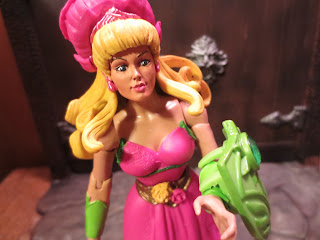 There's a lot of stuff I like about Perfuma but  still have a tough time getting over the fact that I just don't see Perfuma in the headsculpt. I mean, all of the "stuff" is there such as the hair, the tiara, and the flower bonnet, but I still just don't see the character. Other than that (and the too heavy rose cannon), Perfuma is a nice addition. She's definitely not the best of the POP ladies in the line, but she's not the worst, either (Here's looking at you, Double Mischief). She's an average, Good figure.

I have reviewed a ton of Masters of the Universe Classics by Mattel over the past few years, including: