Action Figure Revew: Queen Grayskull from Masters of the Universe Classics by Mattel 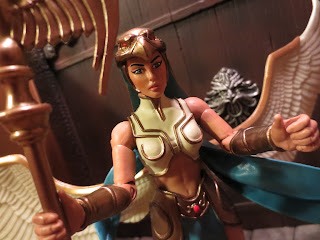 If Queen Grayskull were the last figure released in the Masters of the Universe Classics toyline, I'd be just fine. She's a really cool character that has felt like a missing spot in the Powers of Grayskull era of the toyline for quite a few years now. While Mattel is calling her Queen Grayskull in Masters of the Universe Classics, her real name is listed as Veena and that's certainly the name that fans of the Mike Young Productions animated series know her by. A precursor to the Sorceress, Veena is a larger than life character who, like her husband King Grayskull, sets a number of things into motion that will set the stage for He-Man and She-Ra to rise up! Queen Grayskull is the November figure in the 2015 Club 200x mini sub and I imagine she's probably the most popular figure in that line. She's a major player who is finally getting her due. Ready for a closer look at Veena? Then join me after the break... 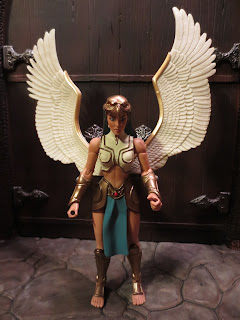 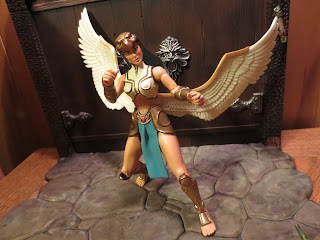 *While the female figures in MOTUC don't have the same range of motion as their male counterparts, Veena is still a really fun figure to play with. Her wings are excellent and a huge improvement over the Sorceress figure from a few years back. She's a fun, sturdy figure that looks fantastic in battle or just standing around looking regal and mysterious. 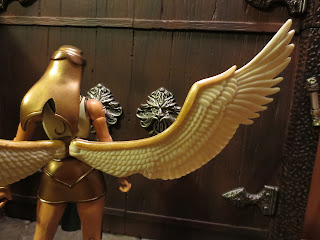 *Like the Sorceress released a few years ago, Queen Grayskull is a guardian of Grayskull who has wings on her back. Unlike the Sorceress figure, these wings are really good. I love how they're positioned lower on Veena's back. They have a great range of motion and you can get a number of different poses with them because of where they're placed. They're also really nicely sculpted, just like the rest of the figure. 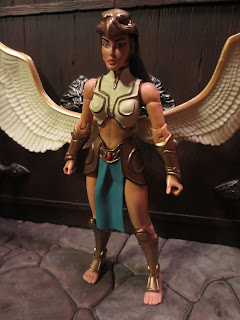 * Queen Grayskull is without a doubt one of the most beautiful figures of the year. I really just love how faithfully the Four Horsemen translated her animated design into a plastic action figure. She's beautifully painted and really has an appealing color scheme overall. There's just so much detail here, particularly due to the fact that she features plenty of new pieces, including her feet. She's the first female figure in the line to have bare feet. I'm really glad Mattel went all out and gave the Club 200x line so much new tooling to represent their unique body types and elaborate outfits. 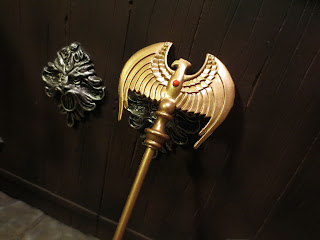 * Queen Grayskull's staff is pretty cool. It's a simple gold staff with the headpiece of a falcon on top. It's definitely a very Masters of the Universe styled accessory and it looks great in her hands. The gold paint on it looks excellent and the red gem on the falcon's chest is a nice, eye-catching little touch. 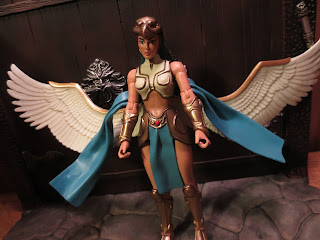 * Veena is supposed to have a cloth that drapes around her neck and over her arms. Since Mattel has chosen to not use any soft goods in MOTUC, the decision made here was to mold a strip of cloth in a soft, flexible plastic. It's not  horrendous but I do with it were molded in a bit more of a discernible shape. As it stands, I'm not really sure how to make this piece look right with Veena. I want to like it but something's off. 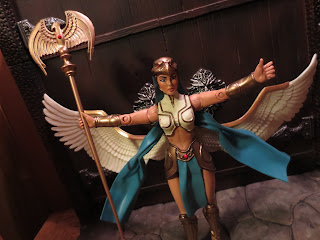 I'm really loving this figure. Most of the second half of the year has been a huge disappointment for the standard Club Eternia subscription so thank goodness that the Club 200x sub has been consistently amazing. Veena is definitely one of the coolest figures in the line. While I wish her cloth wraps had been a bit better executed, there is no denying that she's an attractive figure that looks amazing in nearly any pose. I'm giving her a Great and a 1/2 rating and I'm happy to finally be able to stand her alongside King Grayskull!

I've reviewed a ton of Masters of the Universe Classics action figures on this site, including: