Action Figure Review: Clamp Champ from Masters of the Universe Classics by Mattel 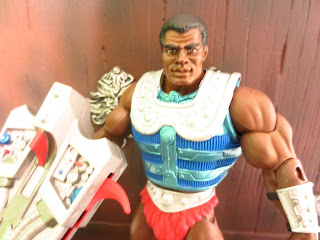 In February 2012 prior to New York Toy Fair, I created a list of the 25 figures I wanted to see in Masters of the Universe Classics before the line ended.  These were the figures I felt needed to be in the line in order for it to feel pretty complete without too many gaps.  Clamp Champ was one of those figures.  Not only does he add some nice diversity into the line, but he also was one of the few figures I remember actually selecting from a store and opening as a kid.  While the original vintage figure was simply the standard body with Fisto's armor and a new weapon, something about the character made me feel like Clamp Champ could easily have become one of the main crew if the line had continued. Clamp Champ was billed as the "Heroic Master of Capture" and appeared in the minicomic "The Search for Keldor", as well as a few of the Marvel and London comics.  I finally have Clamp Champ in hand, as he was the July 2013 monthly Club Eternia subscription figure and just arrived last week.  Does he live up to my expectations? Read on and find out.... 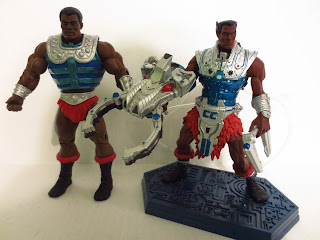 Like most every other MOTUC figure, Clamp Champ is right around 7 inches tall.  The line relies heavily on the reuse of body parts, and everything except for Clamp Champ's armor, head, and weapons comes from the basic male body being used in the line.  There's nothing stylistically that makes him stand out from the rest of the line, which I consider to be a good thing since it preserves unity within the line. 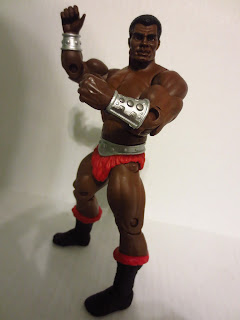 Since the body is the same as most everyone else, the articulation is pretty standard as well: Hinged angles with some lateral rocker motion, boot swivels, hinged knees, swivel thighs, ball jointed hips, a swivel waist, a hinged abdomen, ball jointed shoulders, bicep swivels, hinged elbows, swivel wrists, and a true ball jointed head. Everything works great and the joints are nice and tight. I had to work a bit to get the boot swivels unstuck, but they're perfect now. The quality control on these figures has come a long way and I can easily say the MOTUC body is my favorite standard action figure body out there. It's functional and looks great in a variety of poses. 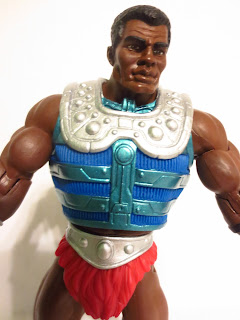 As I mentioned, Clamp Champ's body is the basic MOTUC body for most male figures.  He's got the newer boots without visible ankle pegs and a softer loin cloth. His left wrist has the bracer, just like on the vintage figure and on the basic He-Man body from this line.  There's really not much more to say about it.  It's his armor that gives him his complete look, and I have to say that I really like it.  While the vintage Clamp Champ simply reused Fisto's armor in a blue and silver paint scheme, this figure has his own unique armor that is a perfect blend between the vintage look and the armor his 200x Staction wore. At a glance from the front, you might think this is just Fisto's armor repainted, but up close you can begin to notice some details that reveal Clamp Champ's more technical inclinations.  Details such as intricate lines on the armor bands and the presence of perhaps a mouthpiece of some sort by the throat definitely shows that Clamp Champ has the prowess to take over the role of Man-at-Arms if the circumstances dictate it (and according to the bio, they do). On the back of the armor is a permanently attached backpack of some sort. It's a more "classicized" version of the Staction's backpack and is a cool touch.  I'm sure it's going to drive some pure vintage fans nuts, so maybe making it removable wouldn't have been a bad idea, but there have been plenty of straight updated from the vintage line in Classics, so it's nice to see Mattel acknowledge the 200x style a bit more.  Let's talk about the head sculpt, shall we?  I like it.  It has a lot of 'character' in it, which is always important, especially for a character that both hasn't had a lot of appearances and also is human and has to stand out amongst a wide body of various races and creatures.  He doesn't really look like the vintage toy, I don't think, nor the 200x Staction, but he does look good.  I think he looks a bit older, but perhaps that's intentional to make him seem more capable of filling the role of Man-at-Arms.  Early on their was some speculation that the black Eternian palace guard head was intended to be Clamp Champ. I looked at mine on display, and I don't think that's the case. Clamp Champ has a wider nose and fuller lips than that character, so I think they're definitely two separate characters. 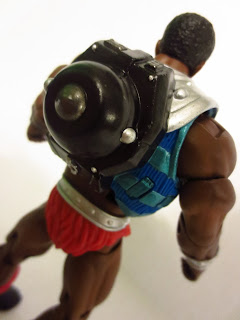 The paintwork is simple, but effective. The red, blue, and silver of Clamp Champ's shorts and gauntlets look great with the metallic blue and silver of his armor.  His left wrist bracer actually has a darker silver paint app on some of the little details to help them stand out.  The flesh tone on his body and head match pretty well, although the head is a bit glossier.  His eyes are really well done and the paintwork on his hair and eyebrows is incredibly clean and neat.  I couldn't ask for much else. 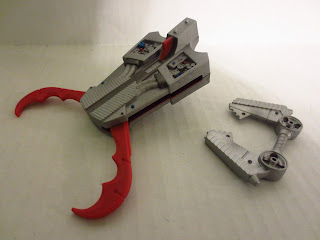 Besides his armor, Clamp Champ has two accessories.  His giant clamp weapon from the vintage figure and the smaller clamp weapon from the 200x Staction.  The giant claw is a nearly perfect recreation of the vintage weapon except that the claws don't close on their own.  They're hinged so they can both swivel out individually.  The accessory has lots of sculpted details such as gears on the bottom and circuitry on the top, and the blades have a slightly wicked and menacing look to them.  Maybe this thing captures you, maybe it lops off your head. There's some great paint detail of reds and metallic blues that make this device look like a labor of love for Clamp Champ.  The main weapon is made of hard plastic, but the handle is soft rubber. While I'm sure this is to keep the handle from snapping off, it does have the tendency to bend a bit while he's holding it.  The smaller claw is pretty much identical in design to the Staction's accessory, although it doesn't have a wire connecting it to the backpack. It's pretty detailed and looks to feature a light over-spray of darker paint, but how does it work without a wire connecting it to the backpack? Bluetooth, baby. C'mon, you're willing to believe Eternia can give people mechanical extending necks but they can't utilize Bluetooth? 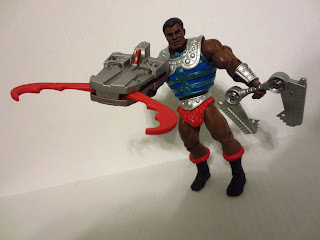 I'm very happy with how Clamp Champ turned out. I really would have liked an additional head with an attached headset like the 200x figure, and perhaps some new bracers, but overall Clamp Champ is effective.  I know my MOTUC reviews are largely positive, but I've truly felt that this year's figures have mostly been exceptional.  I can easily give Clamp Champ a rating of great. If you're just picking out the best figures in the line, he's one to make sure you grab, if possible.  He blends together the best of both the vintage and the 200x figure to come up with a fantastic homage to both. While I'm not having him take over for Man-at-Arms anytime soon on my shelf, it's great to have him around to bolster the ranks of my Heroic Warriors.