Re-Halloween Special: Spirit of Grayskull from Masters of the Universe Classics by Mattel 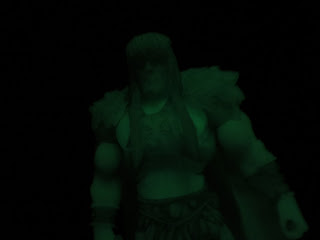 Today is the second day of Re-Halloween! Aren't you excited? Today I'm looking at the 2015 chase variant action figure from Masters of the Universe Classics: The Spirit of Grayskull! Representing the spectral form of King Grayskull, the Spirit of Grayskull is a glow in the dark warrior who should look amazing roaming the halls of your Castle Grayskull playset. Since he's a noble and heroic specter he's not too terrifying. What is frightening, however, is that Mattel actually has been selling him randomly as an online chase figure. You know, because that makes so much sense for an online toyline that relies on a subscription model. Anyways, the figure was good and he finally popped up in late September/ early October so I snapped him up. Ready for a closer look at Spirit of Grayskull? Then join me after the break... 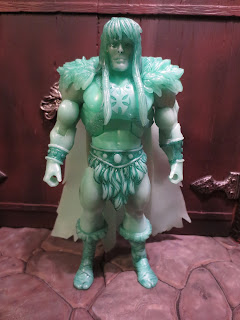 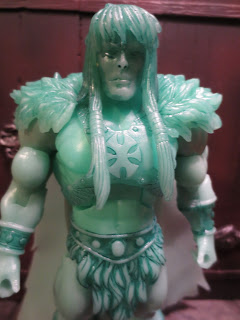 
*I've always liked the King Grayskull sculpt, and it's as strong here as it ever was, but what I like even more is the paint job. Yeah, the Spirit of Grayskull is glow in the dark and green but there is actually a lot of unique shading and stuff going on here. Even when not glowing in the dark this is an interesting figure to look at. He really has a ghostly, ethereal appearance. 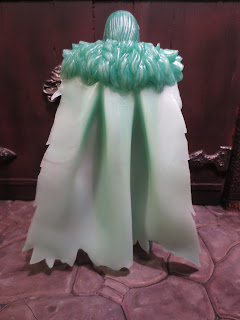 * I love Grayskull's tattered, ragged cape. It definitely is fitting for an ancient specter of some sort who roams the hall of Castle Grayskull waiting for his descendant. 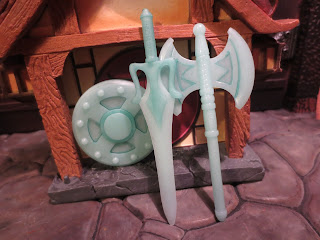 * I really love the Spirit of Grayskull's weapons. While they're the same molds as the basic weapons that have come with a number of He-Man figures, they look amazing cast in the same glow in the dark opaque plastic as the Spirit of Grayskull himself. They're really quite cool. I have to admit that I never get tired of seeing He-Man's wicked battle ax. Never! 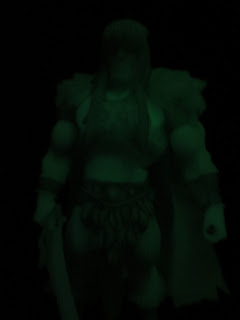 * It's really tough to see in the picture to the left but the Spirit of Grayskull has a really nice glow to him. Not only is it fairly bright but it actually has some definition to it thanks to various coloring in the plastic. Oh, and just so no one freaks out: This guy is sturdy. I know everyone freaks out when Mattel makes a figure that's translucent but I don't think we're going to have any Goddess repeats here. King Grayskull is solid and built for business! 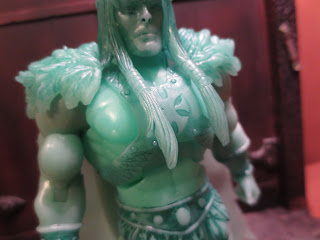 
*I really wish the armor were removable but, sadly, it is not. I guess it makes sense that it'd be one piece since King Grayskull is a spirit here but I imagine you could do some pretty cool stuff with the figure and the armor if you could swap them around with other figures. 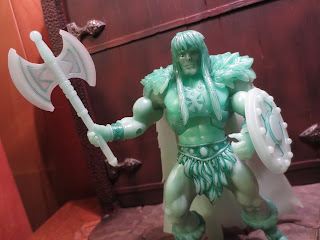 While he's a pain in the rear to pick up the Spirit of Grayskull is a nice figure. He's a cool idea for a variant of the character and manages to be much more interesting than just a standard GITD or translucent figure would be. He's also as much fun as any other MOTUC figure thanks to three nice accessories and great articulation. If barbarian ghosts are your thing, you'll want to keep an eye out for this guy. He's Great!

Like what you see?
I've reviewed plenty of other MOTUC figures, including: