Action Figure Review: Lord Masque from Masters of the Universe Classics by Mattel 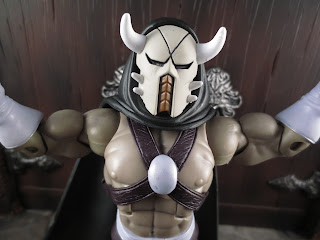 Guess what? Lord Masque is the first new Masters of the Universe Classics figure of 2016! While he's listed as part of the Collector's Choice subscription, a smaller subscription than year's past, he really is still just part of Masters of the Universe Classics. Other than the lack of a bio and the presence of a small logo on the side, the packaging is exactly the same as it's been since 2008. I'm not considering him as part of a different toyline and neither should you! This guy is pure MOTUC goodness. Lord Masque has been a long desired figure in the line because he comes from one of the best Filmation episodes (the two part "House of Shokoti") and his companion, Shokoti, was already released as part of the Filmation series back in 2013, so it's nice to have him. Now that the vintage line is complete, every figure we get just feels like extra icing on the cake, you know? Let's take a closer look at Lord Masque after the break... 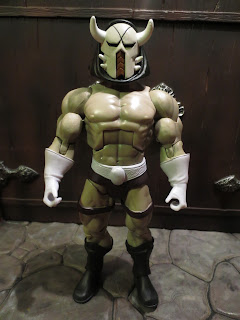 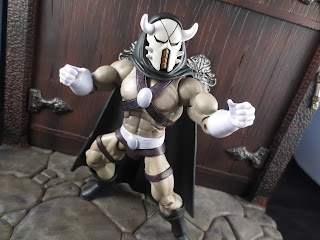 * While he's lacking ankle rockers, Lord Masque is otherwise your average MOTUC figure. That means he has good, solid articulation, nice tight joints, and excellent quality control. He's a fun figure to play around with as he just looks so cool and evil! 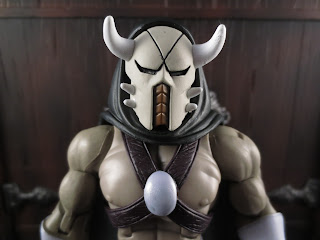 * While Lord Masque is definitely a very basic MOTUC figure (basic body with new harness, cape, and head), his headsculpt really stands out. It definitely has some Filmation inspiration here in terms of the way it's sculpted but I don't think it looks out of place at all in MOTUC. Lord Masque is a really cool looking villain and definitely fits in with the Sword and Sorcery vibe of the earliest MOTU character designs. This guy absolutely looks like he should have been in the vintage MOTU toyline. 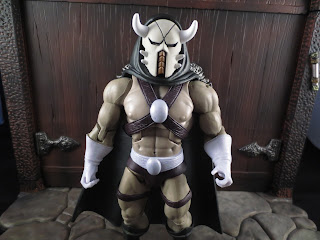 * When he was first shown at SDCC 2015, Mattel has really messed up Lord Masque's colors. I mean, they looked good but they weren't at all accurate. When you have a character who has only ever had one appearance, it is kind of important to get them right, you know? Fortunately, Mattel fixed things and Masque now has a subdued brown and tan color scheme. It's subtle, which is not a word often used to describe anything related to Masters of the Universe, but I like it. Again, very Sword and Sorcery inspired. 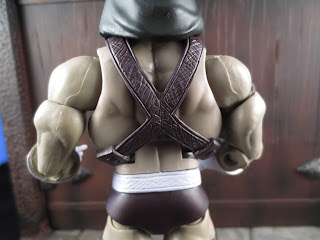 * Not only does Lord Masque feature a nice removable cape but the harness he wears across his chest is removable. In fact, it's easy to remove and put back on. While it's a simple piece, the harness is really well designed. It has a great leathery texture and snaps closed perfectly. I hope the engineering on the armor for the rest of the year is as good as this. 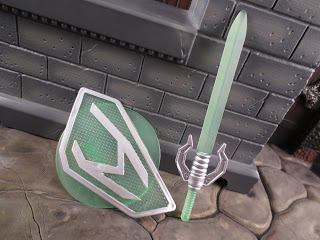 * Besides his removable cape and harness, Masque comes with two actual accessories: A translucent green sword and shield. Do they look familiar to you? That's because they're based on the accessories from the 1992 New Adventures of He-Man "Thunder Punch" He-Man figure. It seems like an odd pairing but these are cool accessories and they look awesome with Masque. Heck, the logo on the shield could also be a stylized M, eh? Whether you give these to a NA He-Man or keep them with Lord Masque as magical bound weapons, you'll enjoy them. 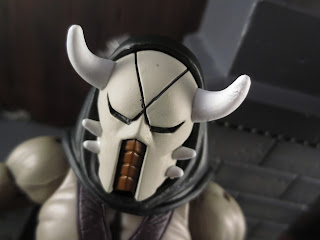 
*Other than the lack of ankle rockers, the only negative I have is that the paint lines on Lord Masque's mask are a bit messy. Not terribly noticeable, though. This guy may not be the most exciting MOTUC figure ever but he's a pretty solid toy. 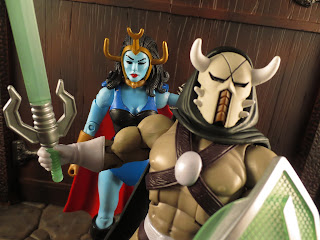 Lord Masque is a much better figure than I ever imagined. He's not the most exciting figure, especially in light of having just received the Club 200x sub for 6 months, but he is a solid figure with a cool mask and great accessories. I love the independent bad guys like this who directly draw their inspiration from barbarian fantasy and sword and sorcery themes, so Lord Masque definitely works for me. Despite being perhaps a tad bit bland, he really is a Great figure and a solid way to start 2016 for MOTUC. Let's hope that things continue like this! 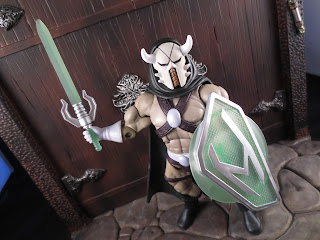 Besides Lord Masque's mistress Shokoti, I've reviewed plenty of other MOTUC figures as well, including: