Action Figure Review: Darius from Masters of the Universe Classics by Mattel 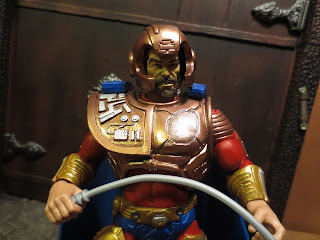 Wow! After the first five months of this year feeling pretty light on Masters of the Universe Classics releases, June has been a veritable treasure trove of figures with the release of the Power-Con 2016 exclusives. Of course, there's still the main Collector's Choice subscription figure as well and for the third figure in 2016 we get Darius! Darius is from the New Adventures of He-Man and is another figure that only ever made it into prototype form in the vintage lines, similar to Mara of Primus or He-Ro and Eldor. Mattel has made another dream come true, though, and we now have Darius for the shelf. While we no longer get bios on the back of the packages, Darius is called the "Leader of the Galactic Protectors," so my guess is that he was replaced by Master Sebrian in the cartoon and was pretty much forgotten (other than a few brief international comic appearances). Ready for a closer look at an old hero who has been given a second chance? Then join me after the break... 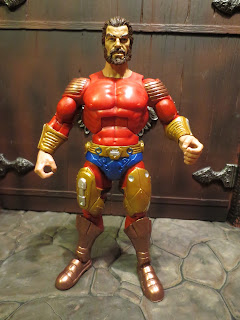 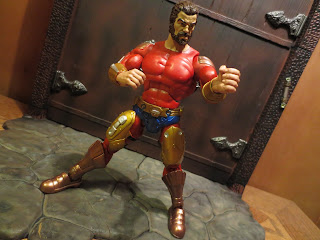 *Not only does Darius have the same joints you've found on nearly every other MOTUC released since 2008 but he has a couple of extra joints as well: True lateral hinged ankles (not simple rocker joints) and swivel/hinge wrists. We've seen these on a few figures in the past but it's cool that Darius has both of them. His articulation is also nice and tight and he should keep most poses you put him in. 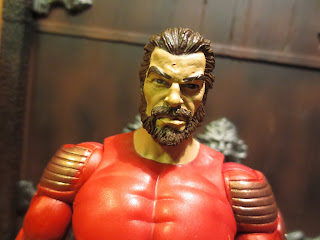 * Check out that headsculpt. Darius is the freaking man. Something about him reminds me of Charlton Heston which isn't a bad thing at all. I'm really digging this headsculpt. It's a bit more "realistic" and grizzled than most other MOTUC headsculpts but it fits perfectly with this character (well, how I'm envisioning him, anyways). 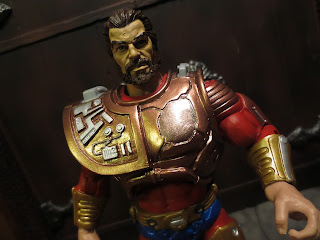 * Check out this armor: It's incredible! It reminds me of the armor that comes with a number of the other Galactic Protectors figures in that it's insanely detailed and features some amazing paint applications. Plus, his arms and legs are new sculpts covered with armored bits, too. I love it! The Four Horsemen really got to run wild on this it seems. 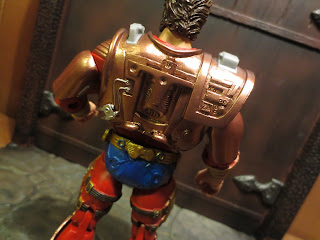 * Here's another peak at the brilliant armor from the rear. Again, it's very Man-at-Arms-ish with lots of little doo-dads and gadgets and what-not. Also, check out the clasps on the shoulders: These allow the cape to simply attach to the armor rather than being a permanent part of the armor sculpt like most other figures in the line. 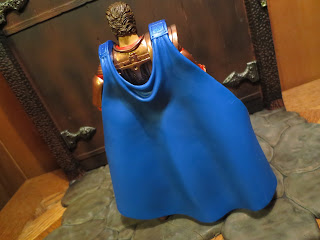 * And here's Darius with the cape on. Seriously, I wish almost every cape in this line had functioned like this! It stays on quite securely and looks great. I would have loved to have been able to swap out more capes between figures. The cape is cool, too, and I especially like how the ends of the cape have some electronic bits and pieces. What all could this cape from the future be capable of? 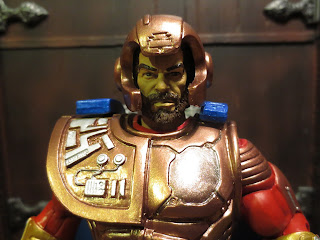 * I'm digging the helmet. Darius doesn't get an extra portrait like so many other figures in MOTUC: His helmet is a legit removable accessory. To be honest, I like it. It looks good, fits well, and has a tremendous sculpt. 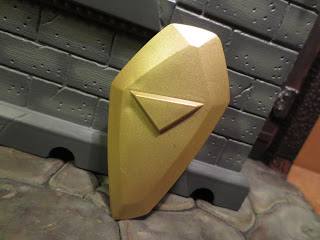 * When his armor doesn't quite do the trick Darius also packs a shield. It's a semi-futuristic, asymmetrical shield that can easily clip onto his wrist. 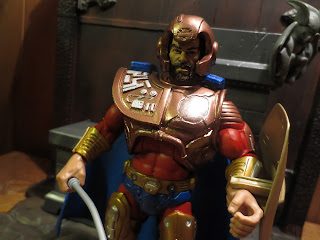 * The colors and the paint work on Darius work really well together. For some reason he's a tougher figure to photograph (he seems to absorb light) but he looks amazing in person. Imagine a New Adventures styled Randor and Man-at-Arms hybrid. That's kind of what you're getting here. 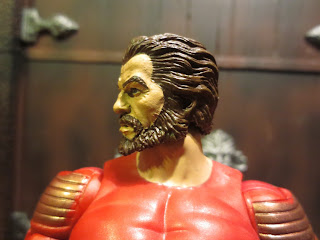 
* If you turn Darius to the side you can see his ears. Oddly enough, though, they've been painted brown. It looks really strange when you finally notice it. It's one of those things that once you see it, you can't un-see it. 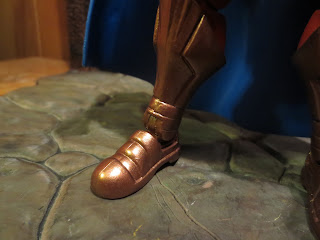 * My Darius has a right ankle that's extremely loose. We're talking as loose as your mom (heh heh). Yeah, it's a quality control issue and doesn't seem to be too widespread, but I felt it was worth mentioning. 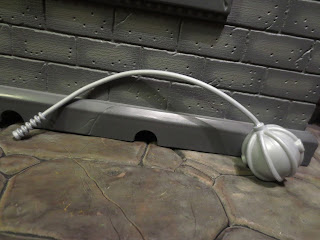 * Darius signature weapon is a flail and, I gotta admit, it's boring as all get out. It's bland, awkward to pose him with, and molded in a flat gray plastic that isn't at all rubbery. It's like a regular plastic and just having the flail's head sag can cause stress marks in the plastic. For such a cool figure it sucks that Darius is armed with such a weak weapon. 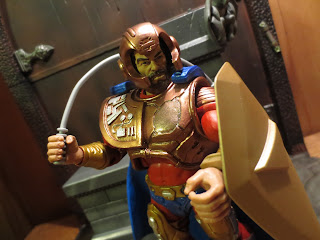 While Darius does have a few faults (the weak flail accessory bothers me the most) he has so many cool details that the weaknesses are fairly easily forgiven. This guy is incredible and while he's not a figure anyone will probably remember from childhood (you know, unless you're that kid who had the uncle that worked for Mattel and sent him vintage prototype figures to play with) he's one that should excite New Adventures fans (yes, they exist!). This guy is a Great figure and is easily worth tracking down if you didn't subscribe. He really helps to add some more bodies to the somewhat understaffed Galactic Protectors faction.


This is the only Darius figure ever made but I have reviewed plenty of other Masters of the Universe figures on the site: