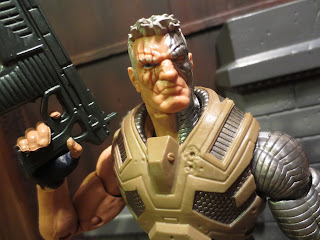 Cable has a long and stories history but I'm not going to get into that today. I don't have the time and you don't either. Do yourself a favor, though, and catch up on Cable's history over here when you have a few hours. As for this review, I'm simply going to be talking about how amazing Hasbro's Marvel Legends line continues to be. By making better figure choices, improving their sculpts and articulation, and adding in more elements such as alternate portraits and cooler accessories, Hasbro continues to outdo themselves series after series. When is the last time you could say that about a mass market retail line? I've never been a big Marvel Legends collector (I probably owned less than 15 figures prior to the Iron Man 3 line) but my love for the Marvel Cinematic Universe and good action figures continues to suck me deeper and deeper into this line. Now with the X-Men Marvel Legends series, Hasbro is playing into my nostalgia. I was really into X-Men back in the early 1990s (so was everyone else) and the X-Men animated series, arcade game, and Toy Biz toyline. While this isn't a classic Cable (it's a fairly modern look for the character) being released alongside of everyone else in the series definitely helped to sell me on this guy. Plus, while the costume is different and less "extreme" it still looks like Cable. Let's check this guy out after the break... 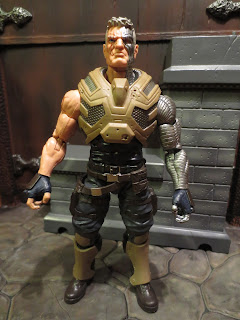 Accessories: Two rifles, ammo clip, and the crotch and belt of build-a-figure Juggernaut. 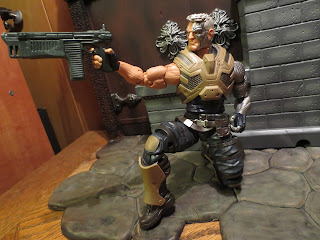 
* Cable's articulation is incredible. I love it! It's solid, sturdy, and plentiful. Cable is definitely one of the best and most playable action figures I've bought in the past few years. This guy is just an awesome toy, no doubt about it. That balljointed mid-torso joint is unreal. 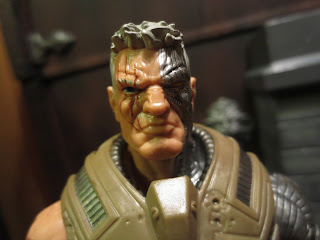 * This is a pretty slick Cable portrait. What do you like better? The pissed off expression? The scarred visage? The half cybernetic Terminator inspired face? The fact that he kind of looks like an even more bad-ass Gary Johnson? Yes, Cable looks like Gary Johnson! He also looks like Cable too, and it's a really solid likeness. 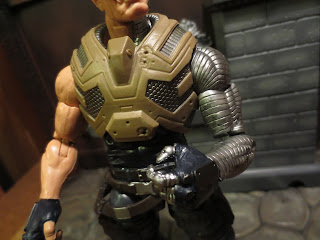 * Not only does Cable have some swell armor but he's also rocking a metal arm. I'd argue that he's trying to fade the Winter Soldier's style but, honestly, Cable was doing it first. The banded metal arm looks good, as does Cable's hand. He looks like he's ready to crush some bad guys. 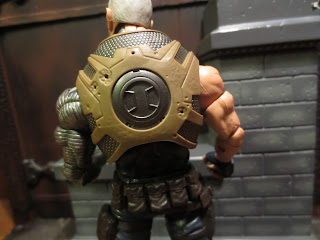 * Cable has some cull stuff on his back, too. I wonder what function that circle on his armor serves? It'd be cool if it were some sort of magnetic device that he could slap weapons against to stow them away but that released them when he needed some firepower. Besides the various dents and dings, he also has a belt on his waist. He's packing quite a few pouches, but still less than he wore in 1991. 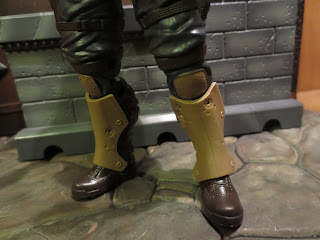 * While Cable shares his upper legs with Nuke, his armored boots seem completely new. They're really heavy duty looking and match his armor. There really aren't any paint applications on them but I dig the various bullet holes and dents on them. 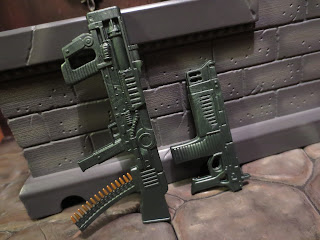 * Cable comes with two guns. They're pretty nice looking sculpts and I like the color they're molded in. The first rifle (on the left) is one that came with Hope Summers a few years back. It works just fine for Cable, though. The little clip of ammunition is removable and slides in and out quite easily. The second gun is my favorite as it just looks like a small but powerful instrument of destruction. 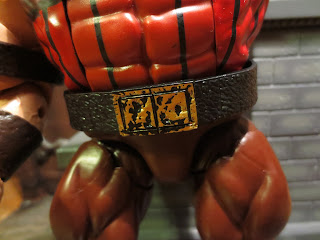 * I'm a sucker for the build-a-figure concept but I don't always pick up a full series of figures or actually get around to building the figure. Juggernaut is one I really want, though, and I'm almost done with him (still just need Iceman and Deadpool, although 'Pool doesn't come with a BAF piece). Cable comes with Juggernaut's waist and belt. 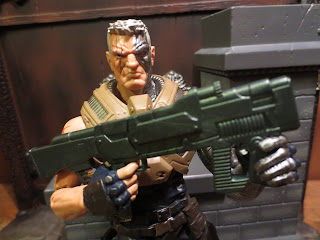 * I really wish Cable had a way to stow his guns on his back. Heck, even just some pegs and posts would have been ideal. Also, he really should have come with a massive weapon like in this picture. That would have been both the bee's knees and the cat's meow. 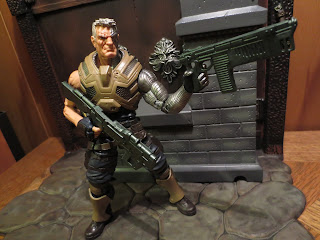 I really like Cable. While he's not my favorite character from this series, so far I think he's my favorite figure. Near flawless articulation, excellent sculpting, and some solid accessories really make for a strong figure. While a few more paint apps would have been nice, nothing here looks unfinished or amateur. Cable is plenty of fun. And he comes with the Juggernaut's crotch. Ya dig? This guy is Epic, no doubt about it.

I haven't reviewed any other Cable figures on this site yet although I owned a bunch of Cable figures from Toy Biz back in the early 90s. If you're looking for more Marvel Legends figures, check out my reviews of: