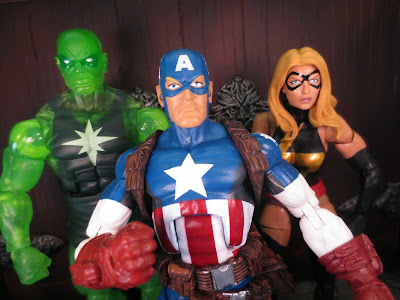 Remember last week when I reviewed a 2006 Toy Biz Warbird/ Ms. Marvel figure that I ordered by accident? This is the figure I really wanted! This three pack of Ms. Marvel, Captain America, and Radioactive Man was an exclusive to Target that started showing up last year in October or November if my memory serves me right. While Ms. Marvel hadn't had a figure since 2006 and Radioactive Man is a new character to Marvel Legends (who I'm completely unfamiliar with), there have been way, way too many Captain America figures over the past few years. Don't get me wrong, as I'm a huge Cap fan, but Cap is getting to be like Superman, Snake Eyes, and Darth Vader: He just appears in toy form far too often! Anyways, this set didn't disappear from store shelves and is now available for a pretty low price (around $30 if you play your cards right). That's not a bad price for these figures at all! I ordered it mainly for Ms. Marvel but since the only other 6 inch Cap I own is the Ultimate World War 2 Captain America, I didn't mind picking this one up. Ready for a very quick look at this set? Then join me after the break... 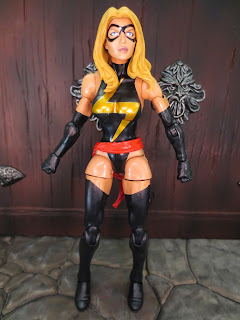 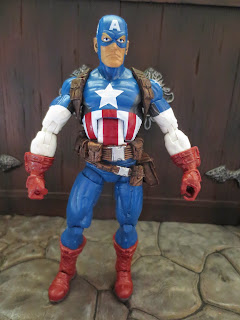 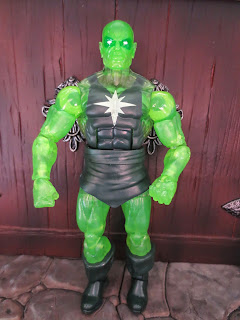 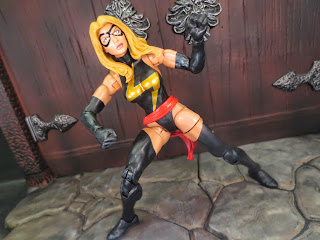 *If you compare Ms. Marvel's current Hasbro articulation with Toy Biz's more articulated figure, I think you'll find that while Hasbro's model is more limited it still manages to feel more functional and melds with the sculpt better. Ms. Marvel is very sturdy and the ball jointed mid-torso works great. 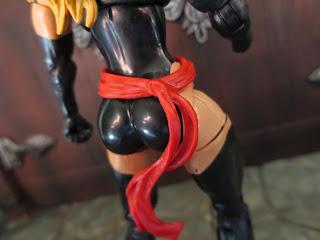 * Hasbro reuses their base bodies over and over again. I'm sure Ms. Marvel shares a base body with a number of other figures in this line but the way they added Carol's trademark red sash really gives her some added uniqueness. Much better than the glued on Toy Biz figure from 2006. 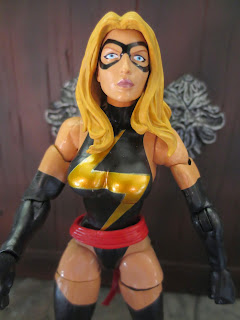 * I really like this figure! I don't think I like her as much as her Captain Marvel persona, but she's a nice representation of Carol's best known look (for now, anyways). The paint work is pretty decent (there's a bit of trouble with some of the black body showing through the flesh toned paint) and stands out nicely. I like the metallic lightning bolt and the work on the face. 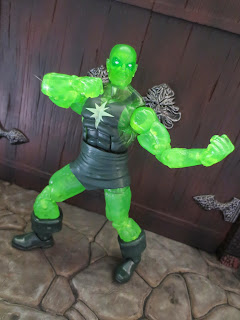 * Radioactive Man is huge! He's around 7 inches tall and is built on a large base body! He's solid, sturdy, and surprisingly nimble. He's a newer Marvel Legends base body from Hasbro current "Return of Marvel Legends" and "Infinite Series" branding and definitely feels like a quality product. He has all of the modern articulation you'd expect from any other Legends figure. 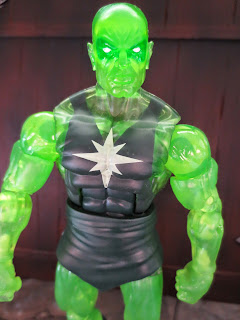 * The headsculpt looks familiar: Is that the comic Drax the Destroyer head? In all honesty, I'm not going to bother to look it up right now. It definitely is rather interesting. I have no clue who this character is or what his deal is but he has a very stern expression and is completely shredded. This is the kind of guy that rips phone books apart with his bare hands for fun. Actually, I'd wager he's stronger than that. 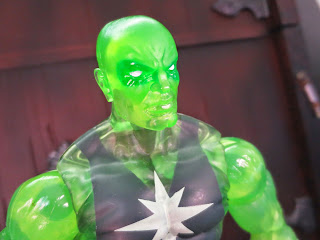 * The translucent look is very cool. He's not gummy or brittle feeling in the least and really looks cool. Almost like he's made out of snot or the same stuff as lime flavored popsicles. He looks even cooler when light shines through him! 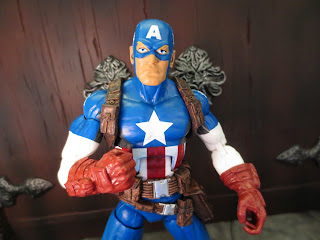 * And here's Cap! I'm not a Marvel expert so I can't pick out what specific version of Cap this is but it is a really cool comic based sculpt of some kind. The musculature is really defined and the gloves and boots have a lot of fine details on them. Cap's outfit here is equal parts soldier and superhero, which I really like. 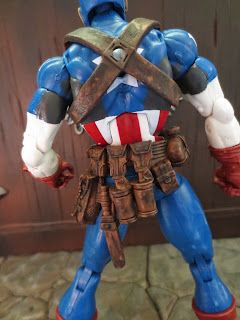 * Cap's webgear is loaded with extras! He's got the straps on his arms that have extra pouches and can hold his shield (it plugs into the hole in the webgear and into the port on his back). On his belt, which has a nice dry brush effect to give it a weathered, leathery appearance, Cap is carrying a canteen, grenades, a knife, and eleven separate pouches. I wonder what he keeps in there? 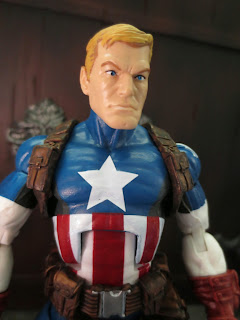 * While neither Ms. Marvel or Radioactive Man come with any accessories, good ol' Steve comes with three: His shoulder harness, his shield, and a swappable unmasked head. There have been a few Hasbro Steve Rogers figures released so I imagine the head came with one of them. Still, it's cool to see Cap's face here, particularly since my experience from the Marvel Cinematic Universe is that he doesn't spend a lot of time covering it. 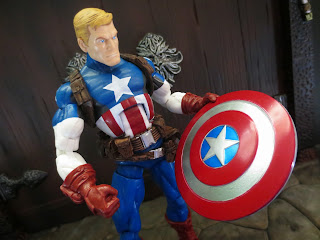 *Could Cap really ever be sold without his shield? Let's hope not! This shield is really nice. It has a metallic sheen to it and can be worn on Cap's back via a plug or clipped to his wrist. Of course, it can also be held in Cap's left hand and tossed during those times when he's commanded to WANK! 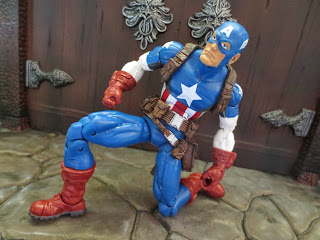 *While Ms. Marvel and Radioactive Man are newer styled figures, Cap's articulation is definitely from Hasbro's earlier phase. His wrists don't have swivel hinges and the hips are those incredibly awkward swivel/hinge hips that are difficult to get correctly in position. It's not terrible, it's just odd. 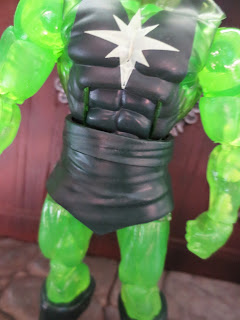 * Radioactive Man, what the heck are you wearing? You look like you're simply wearing one of those lead lined smocks that the dentist makes you wear when they take an X-ray and some pirate boots that you stole from Deathstroke and dyed green. This is a really odd costume. Maybe it's accurate? I don't know. 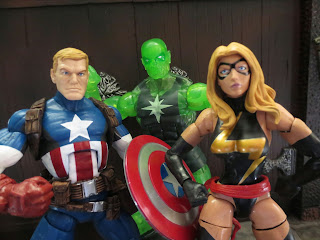 While I think this set received a lukewarm reception from Marvel Legends collectors, I don't think it bad. I can totally see, though, that fans were a bit aggravated by yet another Captain America. While there's not one on shelves right now (that I'm aware of) he's had a ton of figures over the pas couple of years including last year's Winter Soldier line. Radioactive Man is a unique looking figure and seems pretty accurate to a more classic look but just looking at this figure makes me realize that he is as simple as they come (well, other than the translucent body). Ms. Marvel is the winner here for me even though she's a repaint, too. Store exclusives often have bizarre budgets and restrictions on them so maybe Hasbro did they best they could with what they had? Who knows? Factoring in all things, I think this set deserves a Good and a 1/2. It's not the best Marvel Legends Infinite Series product nor is it the best character selection, but it works and delivers three nice toys. Heck, for the now going rate of around $30, this set is fairly tough to beat. At the original $50 though? Not likely unless you're a devoted Marvel Legends collector.