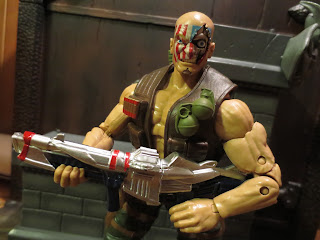 When I bought this figure, I thought that I had no idea who Nuke was. It wasn't until I looked him up on Wikipedia that I realized I do kind of know who he is, but only from his rather different appearance in Jessica Jones where he's a police officer. That guy was interesting, but this figure is freaking incredible. Seriously, I bought this thinking I knew nothing about Nuke other than that he looked freaking insane. He kind of looks like a mixture of Duke Nukem, the Terminator, and John Matrix from Commando which is just A-OK in my book. He might be a mean, sadistic SOB, but Nuke looks like the kind of guy you'd want to cheer for in an 80's action movie. Heck, maybe that's kind of his whole appear? Imagine taking every 80's action film on VHS, throwing them in a blender with some live ammuniton, then assembling them together into an awesome piece of modern art; I'm pretty sure you'd get Nuke. Nuke is part of the second Marvel Legends: Captain America series and includes the torso to build the Civil War version of Ant-Man in his Giant-Man state. Of course, since I wasn't planning on building Giant-Man, I went ahead and bought this guy loose for less money. Ready for a closer look at an action figure crafted from pure testosterone? Then join me after the break... 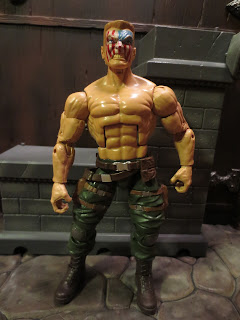 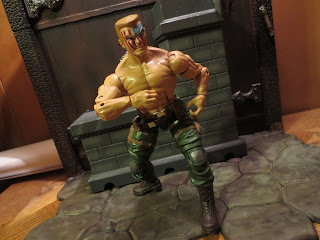 * Hasbro is producing some excellent figures in their Marvel Legends line and Nuke might have the best articulation I've seen on a mass market figure in quite some time. Not only do a number of the joints have ratchets in them (great for letting the figure hold heavier accessories) but the also has excellent double hinged elbows. He can nicely wield his rifle with two hands and pull his knife from the sheathe on his back. Wicked stuff, man. 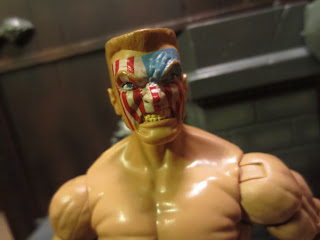 * Looks at his face! Look at it! Apparently that's not even paint: It's a tattoo of the American Flag. And that grimace! And the flat top! This guy seriously should have starred in a first person shooter in the mid 1990s! Look at those teeth? You know this guy has ripped out at least one person's throat with those choppers. Nuke is just purely a bad dude based solely on my observation of this action figure. 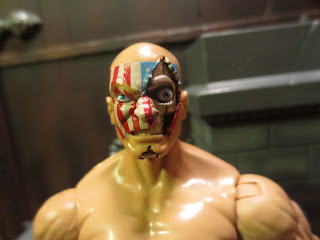 * What? Nuke has an even more awesome alternate head that shows his skin peeling away to reveal a metal skeleton underneath. This is an incredible sculpt and just ratchets the awesomeness of this figure to the next level. The head swap very easily and give this figure some great variety. 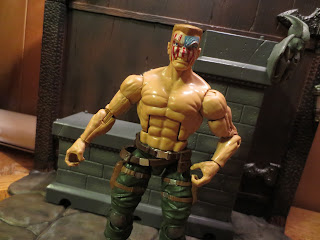 * I'm sure Nuke shares a body with plenty of other Marvel legends figures but that doesn't mean it doesn't look right for him. This guy is ripped. Nuke definitely seems like the kind of guy who would inject cassowary hormones into his neck and eat powdered shark testosterone on his bacon and eggs in the morning, so I'm digging this kind of build for him. 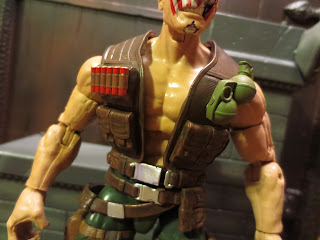 * If you're not keen on Nuke running around without a shirt on you can gear him up in a tactical vest. This thing looks great as not only does it have a paint job that makes it look like authentic leather but it also has plenty of pockets for extra magazines, six shotgun shells, and two hand grenades. 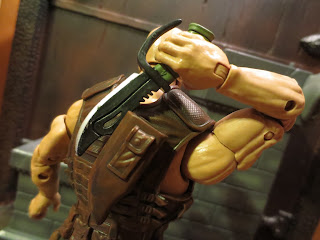 * That's a wicked knife! Not only is it massive with an awesome black, green, and silver paint job, but it even has a custom sheathe attached to the back of Nuke's vest. It's the same knife that Drax the Destroyer comes with in the comic based Guardians of the Galaxy set but it looks even better here. This definitely looks like the most gut-slashingest military knife you've ever seen! 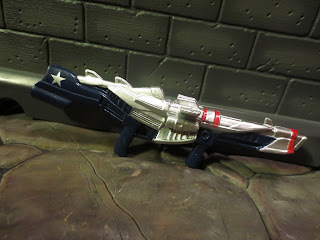 * Check out this massive rifle! It's not the most realistic looking rifle but that's perfectly OK as it looks pretty destructive and it painted red, white, and blue. This is the same rifle that came with the A.I.M. agent from the Captain America: The Winter Soldier Marvel Legends assortment and while it looked huge with those guys, it seems much more proportionate with a big guy like Nuke. 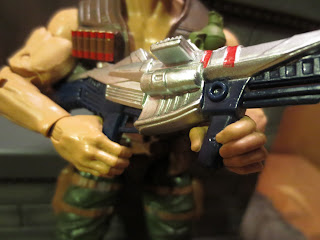 * The only negative I have with Nuke is that he doesn't have trigger fingers. Both of his hands are standard c-grips and while that's nice, it's not perfect for a character whom I imagine loves guns the way Wolverine loves muttonchops. 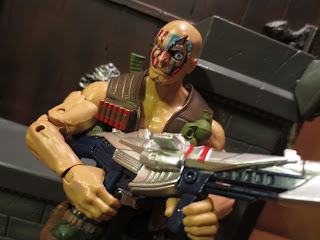 Some figures just have that extra something special and, for me at least, Nuke is one of those figures. I'm nuts about this guy! Hasbro is just absolutely rocking it with each new series of Marvel Legends right now (I wish they had the DC license rather than Mattel at this point) and even lesser known characters like Nuke feel like they're getting extra special treatment. Something about this guy reminds me of my beloved Resaurus Duke Nukem figure which I bought at an Electronics Boutique back in 1998, so it gets extra points for feeling nostalgic to me (despite their being no nostalgia intended here I'm sure). This guy is an epic figure and well worth adding to any collection.


This is the first figure of Nuke I've reviewed (and it might be the first action figure he's received) but I've reviewed plenty of other Marvel Legends figures if you're itching to read some reviews: