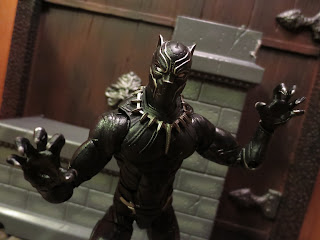 Thus far this year, I think Captain America: Civil War is the movie to beat. It had a solid plot yet moved along at a brisk pace and a massive roster of character who all still each got a chance to shine. One of the best parts of the film was the true introduction of T'Challa, the Black Panther, to the Marvel Cinematic Universe. Played by Chadwick Boseman, Black Panther was freaking incredible and gave off an incredibly cool, almost Batman-like vibe. I left Civil War pumped for the upcoming Black Panther film (2018) and knowing that this was the one figure that I just had to pick up from the film. My word has Black Panther been hard to find! He's finally starting to show up although he's flying off the shelves pretty quickly. Still, Hasbro will probably keep this series in distribution for a while, at least until Civil War comes out on Blu-Ray, so don't give into the scalpers' siren song yet my friends! Do read on, though, and find out why this guy is worth tracking down... 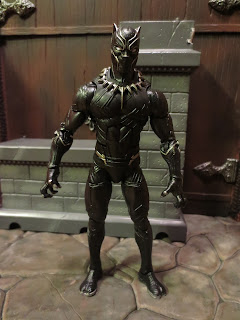 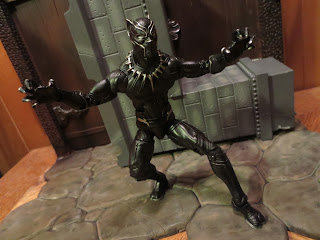 *Black Panther's articulation is pretty incredible. Like most Marvel Legends over the past couple of year's he's sturdy, well articulated, and infinitely fun to pose. A guy like T'Challa can be placed in so many cool poses and this figure completely enables you to do just that. Besides the standard joints, Black Panther does have ratcheting shoulders, and a ratcheting waist and mid-torso to help give a bit more sturdiness to poses. 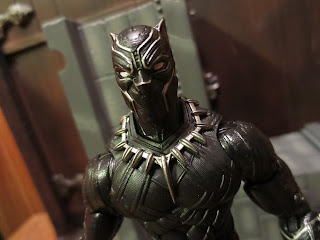 * Oh my gosh oh my gosh oh my gosh! Is that not a darn cool headsculpt? Black Panther is incredible! Seriously: Dude had the coolest costume in the whole film (yes, way cooler than Spider-Man). Hasbro flippin' knocked this sculpt out of the park. His super cool "necklace" thing is actually a separately sculpted piece that is permanently attached to the neck. It looks fantastic, doesn't it? 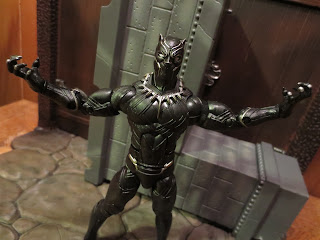 * First, how cool is it that this guy is a completely unique sculpt. As far as I can tell, Hasbro sculpted Black Panther from the ground up to faithfully capture his movie and it looks excellent. Really nice sculpted detail all around.

* Second, I love Black Panther's claws! Since he doesn't come with a weapon or anything to hold, these expressive claws really help to give the figure some more energy. The claws just add so much menace to whatever pose you put T'Challa in, don't they? 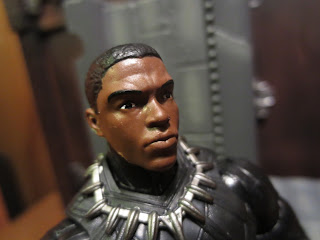 * Hasbro has been great about including alternate heads with many of their figures lately. It's very cool that Black Panther includes an unmasked T'Challa head since I'm pretty sure this is the first time we've ever received a unmasked version of the character, right? It's a pretty fair likeness to Chadwick Boseman although it does need some facial hair. Still a cool extra, though. 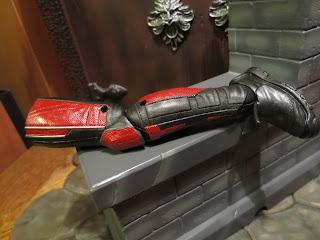 * While I'm probably not going to be building Giant Man, it's always a positive thing for a series of figures to come with a build-a-figure. This looks like a really cool figure, and I'm pretty tempted, so we'll have to see. Of course, if you're interested in the piece leave me a comment and let me know! Maybe we can trade or something? 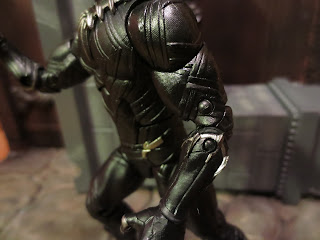 * The only complaint I have with this figure is that the elbows and knees are a bit rubbery. Not gummy, but just a bit softer than I would like to see. I'm sure it's a balance between making these double hinged joints too rubbery and too brittle, but I'd like to see them a bit firmer. Hasbro is nailing this more often than not, though, so hopefully this problem will soon be moot. 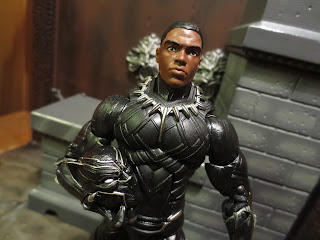 Black Panther is another excellent Marvel Legends figure. I'm not a Marvel Legends completest by any means but I'm finding myself picking up more and more of these figures every month. Part of that is due to the fact that I love the Marvel Cinematic Universe (and the Netflix shows) but the other fact is that Hasbro is really putting their A-team on the Marvel Legends brand. I wish Hasbro were giving their Star Wars figures this much love and attention! Black Panther is a Great and a 1/2 figure and well worth waiting for as your scour the toy aisles!


I haven't reviewed any other Black Panther figures before. In fact, the only other one I own is the first Marvel Universe release (the 1/18th scale line from a few years back). I have reviewed plenty of other Marvel Legends figures, though, including: