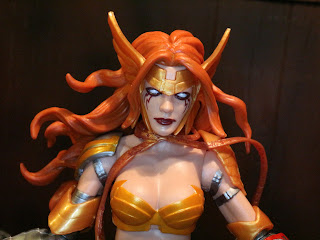 Back when I was just a boy, Angela was not "Marvel's Angela" as the package of this action figure proclaims: She was McFarlane's Angela. Well, technically Todd McFarlane and Neil Gaiman's Angela, but Todd didn't see it that way. So Neil Gaiman sued Todd McFarlane in 2002 and Angela went from being McFarlane's Angela to McFarlane and Gaiman's Angela. I think. Along the way, McFarlane may have also sold Gaiman the rights to a character that McFarlane didn't actually own (Miracleman/ Marvelman). Anyways, Gaiman eventually earned full rights to Angela, making her Gaiman's Angela. Gaiman, probably due to working on clarifying rights to Miracleman, sold Angela to Marvel, making her Marvel's Angela now. She's also apparently Thor's sister. Back when I was just a boy, Angela was part of the second series of Spawn action figures and was know for having a particularly rare and unusual variant where the earliest runs of the figure were released without painted shorts, thus earning the nickname Party Angela. This was a rare and expensive variant, because of course it was. To be brief, I have no connection to Angela as a character; I've never read any Spawn or Marvel comics she has ever appeared in. My connection is due to the fact that she was a huge icon in toy aisles back in mid 1990s when McFarlane pretty much revolutionized the action figure industry overnight. Even though I was just a preteen who was buying toys but also reading Lee's Action Figure News & Toy Review (and later ToyFare), I knew something special was happening in the action figure aisles. To me, Angela is a representation of that magical era in toys and I picked her up due to nostalgia alone. That and she's a pretty incredible action figure. Read on and learn more after the break... 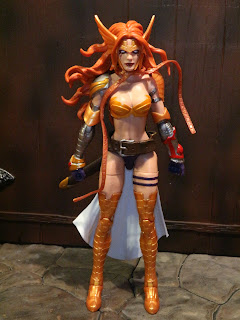 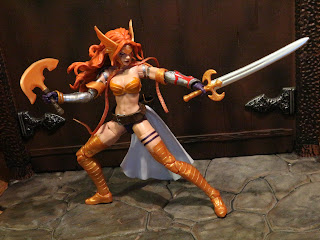 * Hasbro really does have the best articulation on the market right now of any toyline available at retail. Heck, to best them you really have to start getting into the higher end stuff like S.H. Figuarts or Mezco's One:12 Collective. Every joint moves so smoothly and the figure just feels so darn durable. Even with all of that hair, Angela's head moves pretty well, too. The level of playability here is off the charts. Angela is a fun figure to fiddle around with, as you'll get lots of cool poses. 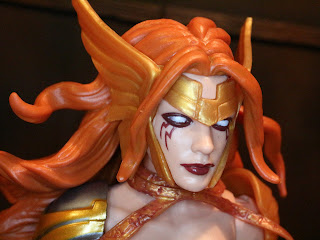 * The headsculpt is pretty slick, as is the blowing hair effect and the gold winged tiara/ helmet. Hasbro continues to knock their sculpts out of the park with greater and greater consistency. They're also doing a great job with the paintwork. It's cool to see Angela's blank, white eyes staring at me in the toy aisles again. She definitely has a unique look to her that still works; it's like a mixture of the style of Frank Frazetta with a Flash Gordon aesthetic. 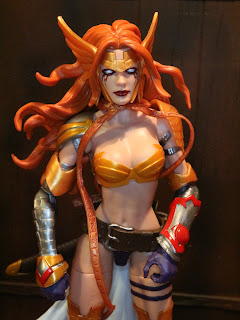 * Angela is a pretty impressive figure and, from looking at her a bit more closely, I believe she is a mostly new figure with few to no shared parts with other Marvel Legends figures. Angela was brought into the line after winning a Fan's Choice Poll in 2015, so maybe that gave Hasbro the confidence to go all out on her. She also has a pretty unique costume for a Marvel character; she looks more like she'd fit in with the Masters of the Universe or the Great Rebellion, doesn't she? By the way, Angela's head is easily removable so you can take off her odd scarf like tassels if you so choose. 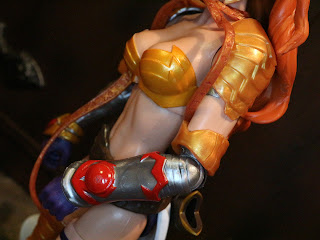 * All of her details are very finely sculpted. Both of her gauntlets are unique as are the armored bits on her shoulders and elbows. There's very little symmetry here, something that carries over from her McFarlane days (McFarlane toys often had very asymmetrical designs) and the level of detail exceeds almost anything we've ever seen with the character before. 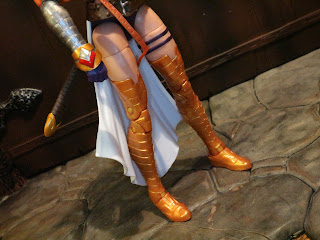 * I love the paintwork. It's neat, clean, and uses lots of great, bold colors like a very pearly gold to make the figure appear very unearthly. Those boots are just insane. 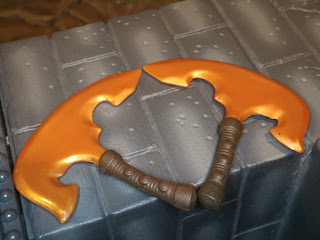 * I also love these two small axe like blades Angela carries. They are quite wicked looking and are fun to pose her with. I'm sure Angela and Draxx could have a great conversation about the best way to use things like this, don't you agree? 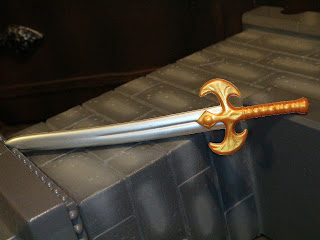 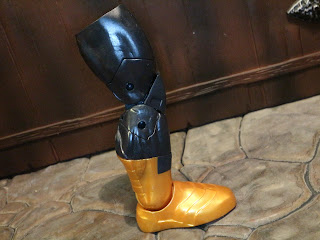 *  Like most of the other figures in this series, Angela comes with a Build-a-Figure part for Titus, a character I know nothing about . I'm not planning on building Titus, so if anyone is interested in it let me know. Despite not planning on building the figure, I still appreciate Hasbro continuing with the build-a-figure model as it does add some more value to the purchase. 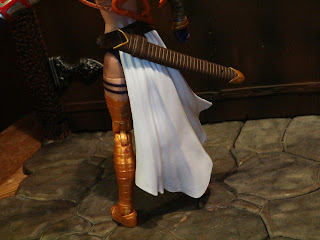 * I like the look of Angela's skirt, belt, and sheathe combination, but the functionality leaves a little to be desired. When putting her in certain poses, sometimes the belt and skirt pop up over her stomach while other positions cause the skirt to hit the ground. We don't see many actual soft goods items in this line but this is one place where it really would have improved things. 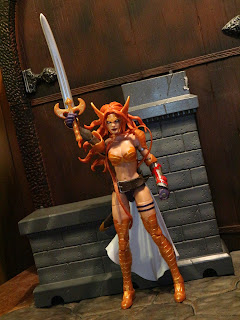 Even though I'm not a big Marvel Legends collector, I really think Hasbro is consistently delivering some amazing figures in this line. This may very well be the best Angela figures ever produced (she's certainly better than any of the other ones I own) and is one of the highlights of a very strong series of Marvel Legends figures. Great weapons, great articulation, excellent paintwork, and a gorgeous sculpt all form together to make an action figure well worth hunting down. Whether you're a fan of the character, nostalgic over her past work, or just like sci-fi barbarians, Angela is well worth the asking price. She's a very, very solid Marvel Legends figure and an Epic toy.

I haven't reviewed any other Angela figures but I have reviewed some other Guardians of the Galaxy figures from Hasbro, including: