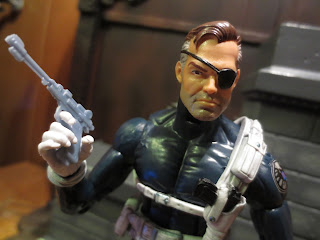 Do you think there are action figure buyers and fans of the Marvel Cinematic Universe who are confused by the fact that this is a white Nick Fury? Today's figure is the classic Nick Fury from Hasbro's most recent series of Captain America inspired Marvel Legends that are just starting to hit store shelves in reasonable quantities. I anticipate Nick being pretty popular because not only is he a version of the character we haven't seen for years (the first Marvel Legend I ever bought was the Toy Biz Nick Fury from series 5 back in 2004) but he also comes with three portraits, one of them which turns him into an army builder. Ready for a look at the original agent of S.H.I.E.L.D.? Then join me after the break... 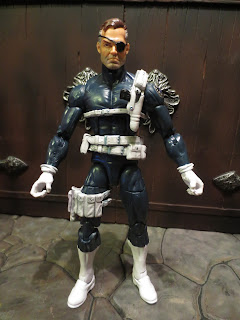 Accessories: Pistol, 3 interchangeable portraits, and the left arm of the Giant-Man build-a-figure. 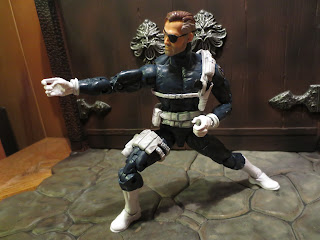 * Hasbro really does have the best articulation scheme for a mass market toyline. The amount of poses you can get on one of their Marvel Legends figures is really astounding. After a lot of consideration and comparing, I definitely think they currently have the edge over Mattel's WWE Elite series. Nick Fury can be put into nearly any pose you'd expect of a super spy! 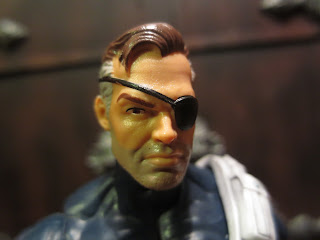 * I love this Nick Fury sculpt. It's darn near perfect. The only thing better would have been if he had a cigar hanging out of his mouth. You know the big H ain't going to let that happen these days, though. This is just excellent work. Even his stubble looks rugged and manly. 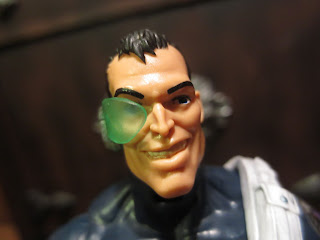 * Nick comes with a second portrait and it's.... Dirk Anger? Yup. Dirk Anger. I'll be honest and admit that the only reason I know who this is is because I read OAFE's review of this figure when they published it. Dirk's apparently a Nick Fury parody. Whatever. I just like his maniacal grin and his translucent green eye screen. The Marvel Legends team is really pulling out all of the stops right now and releasing some creative stuff. Maybe they can have a talk with the Star Wars: The Black Series team, eh? 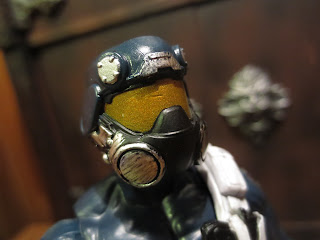 * Last, but not least, the figure comes with the head of a nameless, faceless S.H.I.E.L.D. operative. This is a pretty cool sculpt and essentially makes this figure an army builder. I like the  drybrushing on the metal parts of the helmet as it helps the armor to look like it's seen some action. 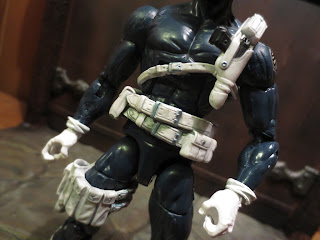 * I don't care if you lump me in with Rob Liefeld for saying this: I frigging love an action figure wearing enough pouches to carry the amount of ammunition necessary to supply a 1980s action star. These are all separate pieces and they're well sculpted with some nice paintwork. They have a dark wash that helps the white to look a bit more subdued and realistic. Fun fact: I count 13 pouches, 5 buckles, and 2 holsters. 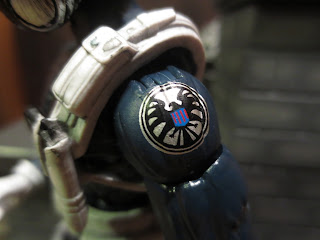 * On both of his shoulders Nick Fury wears the S.H.I.E.L.D. logo proudly. I can appreciate someone who isn't ashamed of their job and Fury lets the world proudly know that he's a high-tech super spy. Well, maybe that isn't such a good thing. The print on the logo is really slick, though. 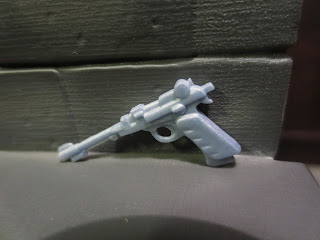 * Fury comes armed with his Electric Needle Gun. It's a nice looking sculpt and it fits perfectly in his right hand for bad guy blasting action (bad guys not included). 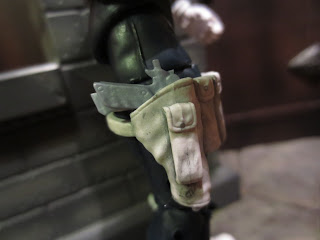 * When Fury's too busy using other methods to stop the bad guys he can safely tuck his pistol away in the holster on his hip. How convenient! 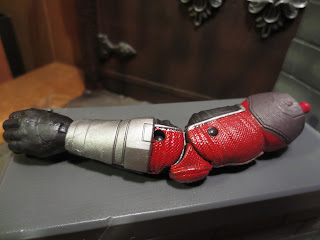 * Nick Fury comes with the left arm for Giant-Man. While I'm not planning on building this figure, I'm still glad to have the piece because I can hopefully trade it or sell it. Of course, I'm now 1/3 of the way to completing Giant-Man, so maybe I'll change my mind at some point. It looks like a really cool figure and I love Ant-Man. 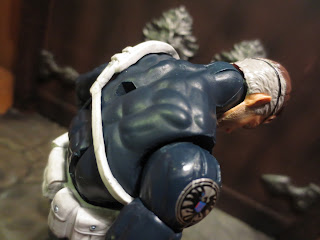 * So I praised Fury's articulation above. I still stand by the range of articulation, but I do have to point out that Nick Fury has some very loose joints. His mid-torso hinge is really loose (you can almost see through it) and his neck hinge actually flops around a bit. Shake him around a bit and he'll look like he's moping like a Peanuts character. 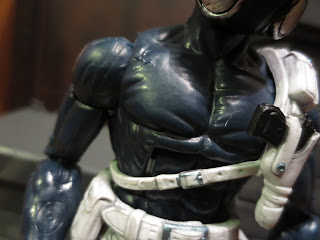 * I really do not like this body for someone wearing a tactical uniform. It just looks so chiseled and well defined that it seems more like they're wearing body paint rather than tight clothing. Again, we're not talking normal superhero musculature here; we're talking insanely toned definition. What kind of material could that possibly show through? 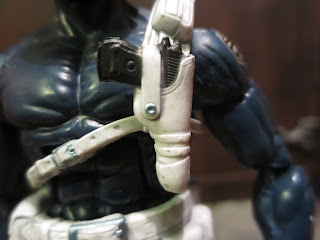 * I've decided to take a hard stance; from now on I find it completely unacceptable for a 6-inch figure to feature a weapon permanently sculpted into a holster. Take this handgun in Fury's shoulder harness: How would this not have been improved if it were an actual removable accessory? That would have been flipping fantastic and you know it. 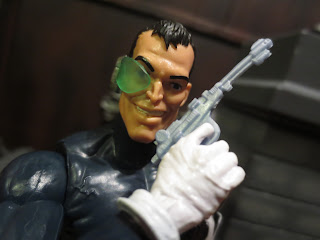 Three alternate heads with Nick Fury? That's crazy and nearly unheard of! Even with the figure's flaws (I can overlook most of them except the floppy neck joint) Hasbro has still put out a really impressive figure. Had we just got Nick Fury with his pistol this still would have been a solid figure. Throw in the Dirk Anger head and the masked S.H.I.E.L.D. agent heads, though, and you've got something pretty special. Nick's still a Great and a 1/2 figure and it's cool to have this version of the character available. The Samuel L. Jackson version is my personal favorite, but I already own a version of him; Now I can have both Nick Furys go on wacky adventures together!
I haven't reviewed any other Nick Fury figures on Action Figure Barbecue but I have reviewed plenty of other Marvel Legends figures, including: