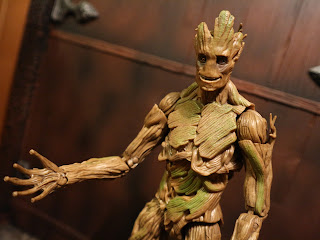 If you want to talk about a success story for introducing new comic characters to audiences, look no further than 2014's Guardians of the Galaxy. Featuring a group of characters that at the time were Marvel C-listers (at best), the combination of an incredible cast, a seriously fun film, and one of the greatest soundtracks ever elevated the eponymous Guardians of the Galaxy into the spotlight. Remember when everyone was saying Guardians of the Galaxy was going to flop? As Rocket might say: Hahahahaha. Anyways, today I'm looking at the current Marvel Legends Toys 'R Us exclusive which features three versions of the insanely popular flora colossus Groot. If you meet someone who doesn't know who Groot is, you've probably met someone who has been living in a bomb shelter since at least the 1980s. The guy became a pop culture phenomenon overnight and Hasbro is absolutely capitalizing on his popularity in their merchandising for Guardians of the Galaxy Vol. 2. While Groot was a build-a-figure in the Marvel Legends tie-in series from the first film, now Hasbro is releasing him on his own. I found this guy the other night and I'm pretty thrilled, as I anticipated him being pretty hard to get my hands on. Let's take a closer look at the Groot Evolution set after the break... 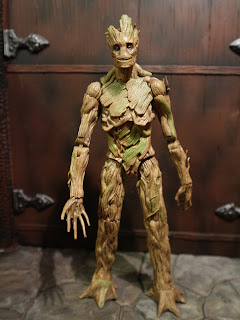 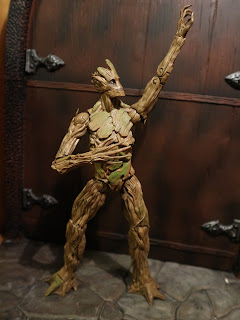 
* Remember, Groot was originally a build-a-figure in the Marvel Legends line for the original Guardians of the Galaxy line, so everything except the head is reused. I never got the chance to fully build him (I skipped Nova and the Space Armor Iron Man) but I did pick up the comic based 5-pack set, though. The articulation might be a bit more stiff than your average Marvel Legends figure but it still works pretty well and seems befitting of Groot's tall and lank nature. He looks great just standing around, reaching up, or carrying other figures. 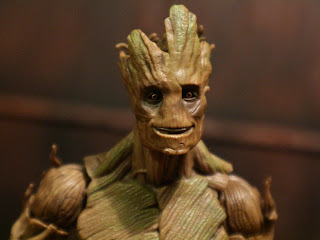 * Groot has a completely new headsculpt from the original version and it shows the lovable "totally not an Ent" giving off a really charming grin. The paintwork and detail on the sculpt looks incredible. This is definitely more of an "I am Groot!" expression versus the "I am Groot" expression of the original figure, don't you think? 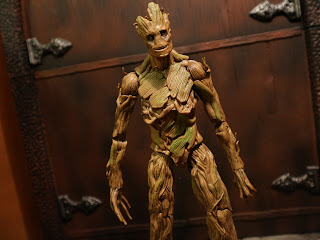 * Hasbro did a great job in capturing Groot's build and composition. I'm loving the wood texturing on this guy. He really is a great looking figure, even if the body is now a few years old. A good sculpt is a good sculpt, what can I say? 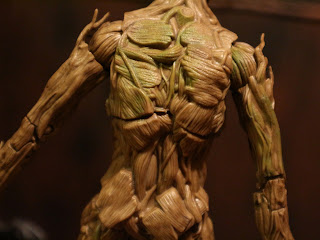 * The paint work is very understated here but it manages to be really effective. There's a dark wash all over the figure to highlight the detail and an earthy green spray in random places to add a bit more of an organic feel to Groot's body. 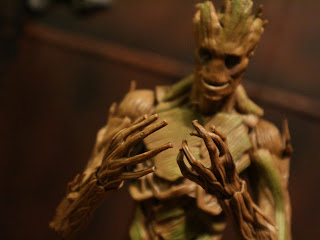 * Groot's hands are really expressive. The way that Hasbro rendered Groot's long, spindly fingers just looks great and adds a lot of personality to the figure. 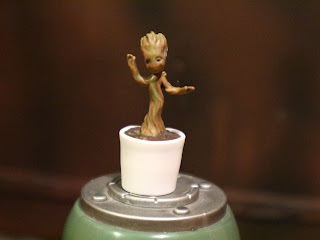 * The reason this set is called Groot Evolution is that it includes three figures of Groot at different stages during his growth. Obviously you've been looking at the full grown Groot so now it's time for Baby Groot! Yup, we get a really cool little potted Baby Groot here. This is a completely different sculpt than the potted Groot that came with the comic based 5-pack and appears to be very movie accurate based on the end of GotG Vol.1. The paint is pretty cool on this little minifigure. 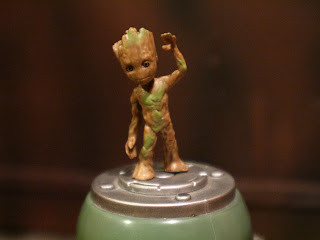 * The third Groot stage here is Toddler Groot. This is how we've seen Groot in the trailers for Vol.2 and it's really a funny little figure. It's also pretty small (about 1 3/8ths inches) with great paintwork and sculpting, too. 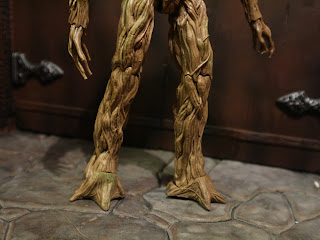 * My only complaint with this figure is that his lower legs come separate in the package and attaching them to his knees is insanely hard. I really had to work to get these things plugged in. Seriously.  I worked up a sweat. 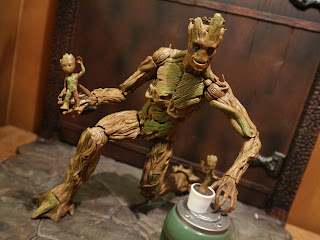 Hasbro is just killing it with their Marvel Legends offerings, especially those tying in with Guardians of the Galaxy. Groot is another Great and a 1/2 figure in the line and really makes for a fun purchase. Hopefully Toys 'R Us can keep him well stocked because you just know that everyone is going to want a Groot. While the main figure is largely a repaint, the new head and cool mini Groots absolutely make this a worthy purchase.


I've reviewed a couple of other Groot toys: The Disney Infinity Groot and a comic inspired Groot from the Marvel Legends Guardians of the Galaxy 5-Pack.

If you're looking for more Guardians of the Galaxy Marvel Legends figures, check out the following: