Action Figure Review: The Punisher from Marvel Legends by Hasbro 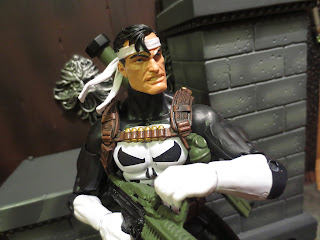 I'll be honest: Currently the store that seems to carry the most toys I'm interested in seems to be Walgreens. Over the past couple of years they've developed an expanded toy selection, lowered toy prices to regular retail levels (as opposed to my local CVS that wants 12.99 for their lone 3+ year old Star Wars figure), and have managed to nab some really nice exclusives. I love swinging by there on my lunch break and seeing what's being offered. Today I'm looking at what is quite possibly my favorite Walgreens exclusive yet: The Punisher. For some reason, I just love the Punisher. Season 2 of Daredevil absolutely reignited my interest in the character and I knew this was a figure I just had to grab. He's starting to show up at more and more stores (Walgreens handles their exclusives much better than most stores, it seems) and with a bit of searching you should be able to snag what is currently one of my favorite figures released this year. Check out this darn near perfect rendition of Mr. Frank Castle after the break... 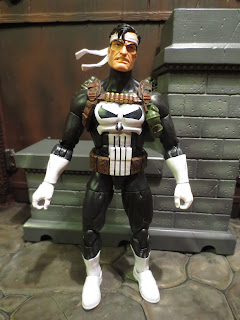 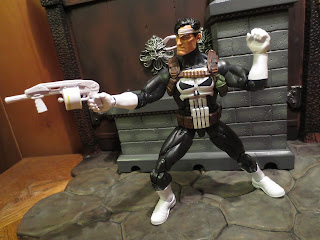 * Frank here is nearly action figure posing perfection. I love the current Marvel Legends body and articulation model and it's executed really, really well on the Punisher. The plastic is quite firm for the most part and he feels solid and sturdy with only a minor amount of give in the double-jointed knees and elbows. He stands well, holds his weapons naturally, and is definitely one of those figures I keep picking up and playing with. 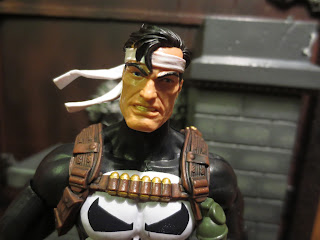 * This is an incredible Frank Castle headsculpt! A number of collectors are calling this the Jim Lee Punisher due to the presence of the headband from his time on The Punisher: War Journal. That's not a bad observation and it definitely seems to be the inspiration for the figure, also due to the very cool webgear. Frank has such a great grimace on his face and the dynamic appearance of the flowing headband just ups the ante. 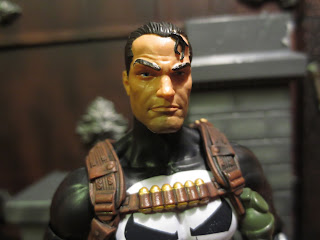 * Right now you just might be asking yourself "Mr. Barbecue: What if I don't like my Punisher figure dressed up like the Karate Kid?" Well, that's why Hasbro included a second headsculpt that's a bit more rugged. This version of Frank has slicked back hair, a bit of stubble, and a chin that is second only to Bruce Campbell's. The heads swap out easily and give the figure even more versatility in how you display him. 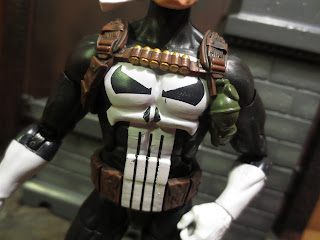 * Giant skull on his chest? Check. Pouch covered belt with ammo pouches on the front that look like giant teeth? Check. Tactical webgear with ammunition, grenades, and a wash that brings a life-like leather quality to the rig? Triple check. This is a great costume design and Hasbro knocked this out of the park. 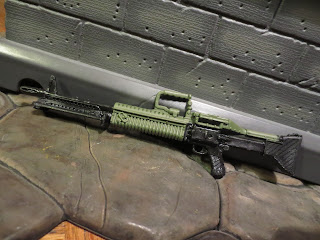 * The Punisher wouldn't be the Punisher if he didn't come with any firearms, would he? That guy likes to spray his foes down with a hot bath of lead. To help in his crusade against evil, Mr. Frank Castle carries an M60 Machine Gun. This 7.62 spewing machine has a handle for easy carrying and some nice olive drab green paint apps to help it look cooler. 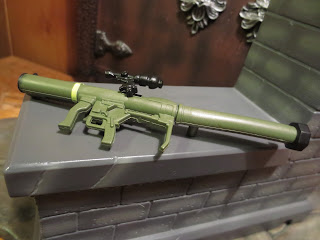 * When even an M60 isn't enough to hit a target hard, Frank packs his handy-dandy SMAW (Shoulder-launched Multipurpose Assault Weapon). This is a really nice rocket launcher and it's fun to pose the Punisher wielding this. It has quite a few paint applications on it and looks pretty sweet. 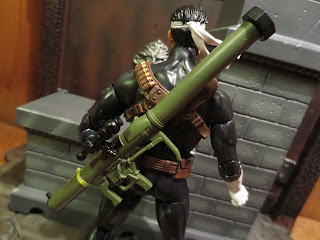 * Know what else is cool? There is a peg on the rocket launcher that can plug into the hole in Frank's webgear and back. Yup, he can tote this bad boy along until he needs it. You know, if he ever wants to turn off a big screen TV using the modified Elvis method.

* When he needs to deal with threats up close, the Punisher can resort to his Street Sweeper, a drum magazine shotgun. While it kind of looks weird in white, a number of Punisher figures have utilized white accessories since it is part of his color palette. I like that this late 80s/ early 90s version of the Punisher does come with weapons that would have been available to Frank during that time period. This would have been cutting edge at the time, but that would have only increased it's desirability. 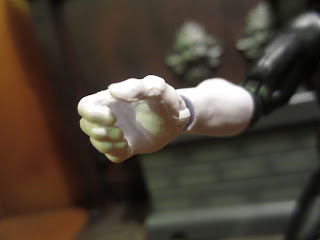 * I have one complaint: Frank Castle doesn't have hands with trigger fingers! The Punisher. And no trigger fingers. That, my friends, is called an oversight. Of course, this problem is easily rectified by using your imagination, but that's no fun. I guess the Punisher not being able to use his trigger fingers would be the equivalent of Spidy losing his ability to shoot webs in Spider-Man 2, right? 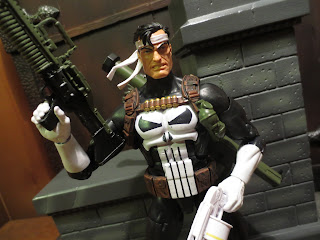 I really do love this figure. It's a great figure and would have been a standout figure in any Marvel Legends wave but, considering it's a store exclusive and that it managed to hit within 6 months of Daredevil season 2, I think it's an amazingly well-timed and well-executed exclusive. This guy gets an Epic rating from me. At this point in the year he's definitely one of my absolute favorites. If you can buy this guy and not have the urge to pick him up and play with him every few hours, you're just no fun. You also probably hate justice. 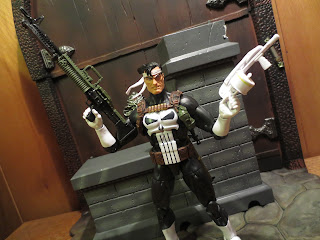 While I own quite a few other Punisher figures, this is the first one I've reviewed on this site. I have plenty of other Marvel Legends figure reviews on here, though: