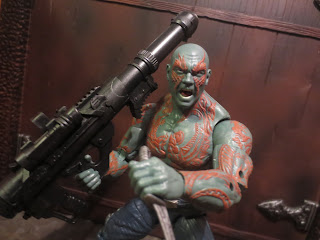 While I'm largely getting out of the Marvel Legends game thanks to my recently found love for Mezco's One:12 Collective line, I was absolutely willing to make an exception for Hasbro's new Guardians of the Galaxy Vol. 2 figures. I love the Guardians and these new Marvel Legends are largely better than the ones from the first film. Except for Drax. Drax is still incredible but, so far as I can tell, he is the only figure that reuses parts heavily from the original release. Of course, that was a darn fine figure and it still holds up well. Considering the paintwork is redone and Drax has a new headsculpt and a new accessory, I decided he was worth a buy. He's part of the first series of 6 figures which also includes Yondu, Vance Astro, Angela, Darkhawk, Nova, and Star-Lord which include the build a figure parts for Titus, a character I know nothing about. Actually, this set includes quite a few characters I know little to nothing about (Vance Astro, Titus, and Darkhawk). Drax, though, I'm absolutely familiar with. Let's take a closer look at this super cool guy after the break... 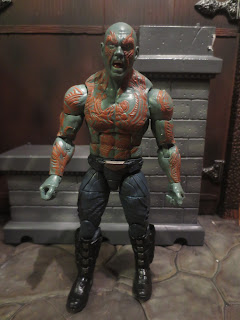 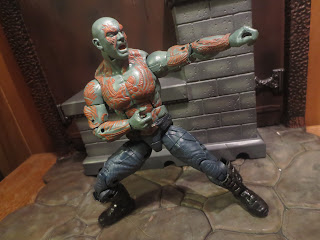 *Drax might be mostly a reuse from the 2014 figure but that doesn't hurt his articulation much at all. Drax was one of the most well articulated figures of that year and he still feels incredibly durable and solid with a great range of motion. This guy is insanely fun to play with and can get in some incredible poses, especially when interacting with his two wicked knives. 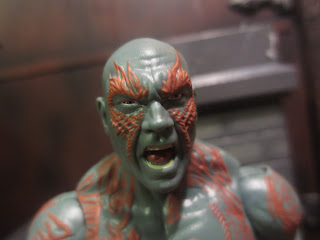 * One of the top reasons to pick up this figure is the new Drax headsculpt. It has a great likeness to Dave Bautista and really manages to capture his angry expressions as Drax the Destroyer. The paintwork and sculpt is excellent here and this angrier headsculpt provides a nice variant to the original figure's calmer expression. 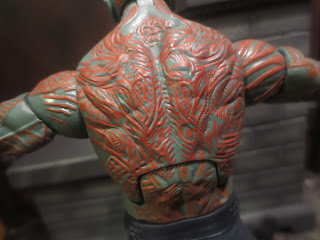 * The tattoos look incredible. Again, this is a reused sculpt from the 2014 figure from the first movie, but it's still a strong sculpt. The paintwork is even cleaner and tighter, though, so this is definitely an improvement. 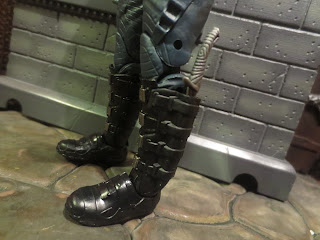 * Drax also has the same pants and boots as both the 2014 figure and the Drax from the Guardians 5-pack, although thus time the pants are cast in muted blue rather than the red of the original figure. These still have an awesome sculpt and they securely hold Drax's daggers in place. 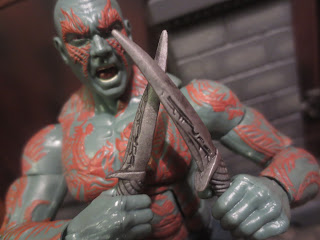 * Drax's daggers are reused too, but they have a better dark wash that really brings out the detail. Drax looks great with these and, thanks to the great range of motion in his shoulders, he can hold them in some great poses. 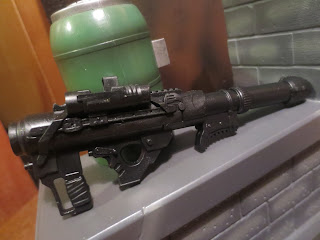 * Drax's new accessory is a really powerful looking missile launcher. It's pretty large but with a little finagling Drax can hold it. There isn't any paintwork on the piece but the sculpted details are pretty sharp. 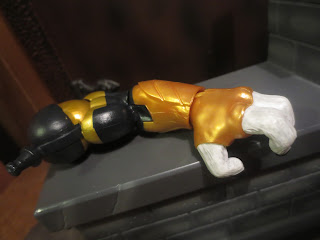 * As is par for the course with most Marvel Legends figures, Drax comes with a Build-a-Figure part. He gets the left arm of Titus, a character I have no clue about. I'm not planning on building Titus, so if anyone is interested in it let me know. Despite not planning on building the figure, I still appreciate Hasbro continuing with the build-a-figure model as it does add some more value to the purchase. 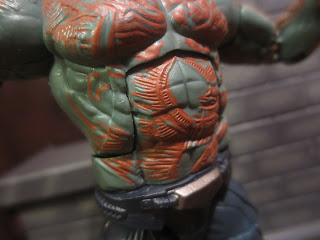 
* The only downside to this figure is the mid-torso joint. It looks fine but it has the ratcheting effect that some of the Legends figure had a few years back. For Drax, this means that he tends to either be leaning forward a bit or backwards a bit. 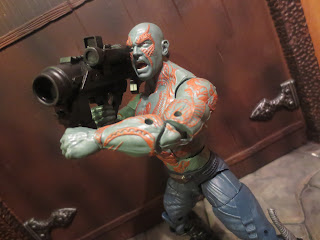 While he's largely a reuse of the previous figure, there's no denying that this updated Drax is still a good figure. Whether you missed out on the last one or just love the Guardians of the Galaxy so much that you decide you want both, Drax is a winner. He's a lot of fun to play with and looks amazing on display. Drax is a Great and a 1/2 figure and another release that shows Hasbro is serious about keeping Marvel Legends as the top dog in mass market toylines. 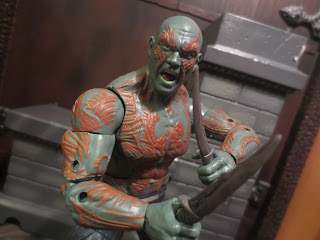