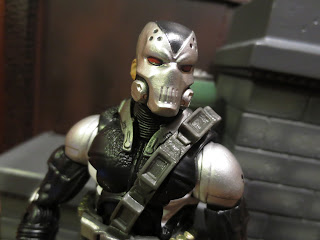 Today I'm looking at a Marvel Legends figure from earlier this year that I finally picked up because he just looks so darn cool. Do you know who it is? No, I'm honestly asking you. The packaging says this is Demolition Man (specifically "Marvel's Demolition Man" so you don't mistakenly believe this is Sylvester Stallone) but when I look up that character I find information on a guy I have no clue about who looks nothing like this guy. To be honest, I'm not that concerned about it, either: I bought this figure because he is freaking cool. He looks like some sort of mercenary or black ops operative who would fit right at home in the Metal Gear or G.I. Joe universe. He was released earlier this year as part of the Captain America inspired "Red Skull as Onslaught" series and was one of Hasbro's weird variant that's not really a variant, as both Demolition Man and Taskmaster are sold as Mercenaries of Mayhem. Ready for a look at this Mercenary of Mayhem? Then join me after the break... 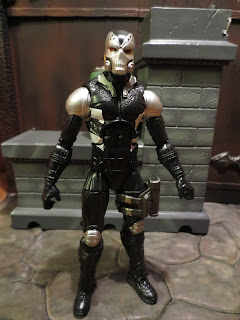 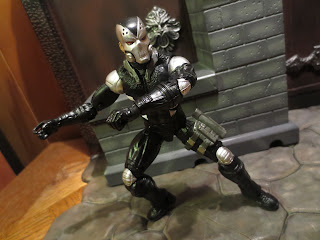 * I feel like I'm always gushing about the articulation on Hasbro's Marvel Legends figures, but it's just so good! Hasbro really has a solid articulation scheme worked out for these guys and Demolition Man might be one of the best yet. Not only are all of his joints tight yet mobile but the double hinged elbows and knees do not feel the least bit rubbery. This guy is so much fun to pose and play with. 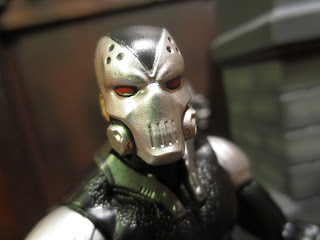 * This is a really cool headsculpt. It's nothing too crazy: Just a silver skull-shaped face mask/ gas mask with red eyes. If I had to travel on a subway everyday, this is absolutely what I would choose to wear. 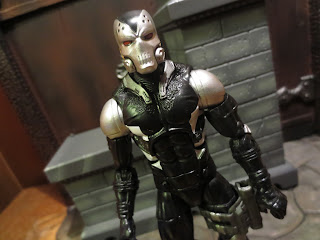 * Below the neck (well, and on the neck, too) Demolition Man is clad in a really cool tactical outfit. It kind of looks like something out of Crysis and I'm digging. It turns out that a good portion of this body is reused from the earlier Electro figure from the Amazing Spider-Man 2. Weird, huh? It sure works, though. 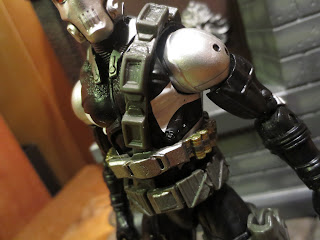 * To really flesh out his look Demolition Man includes a very cool harness. It's completely removable and features shotgun shells, pouches, and a sheathe for his knife. 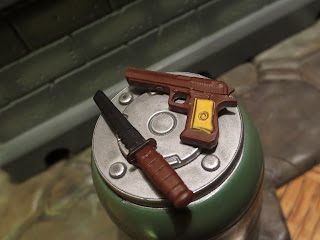 * To help him do whatever it is that he does, Demolition Man comes with some decent sidearms. He has a Desert Eagle styled pistol and a combat knife. I like the brown and mustard yellow color scheme on that pistol. It actually looks really cool and gives the weapons a bit more personality than basic black or silver. 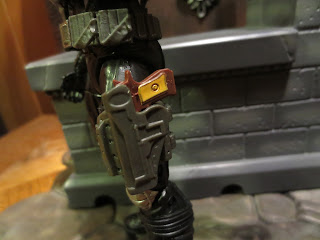 * Demolition Man has a sheathe for the knife on the back of his harness but he sports a really nice combat holster on his left hip to carry his pistol in. Both weapons stay in their respective places safe and secure. 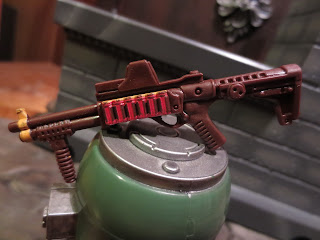 * Like that pistol? This shotgun is even cooler! It's a short riot shotgun (I first remember this accessory coming with the earlier Hasbro Punisher figure that came with a black trench coat) with the same attractive brown and yellow colors scheme of the pistol. The shotgun shells on the side storage rack are also painted red, too. This thing really looks like a slick toy, don't you think? 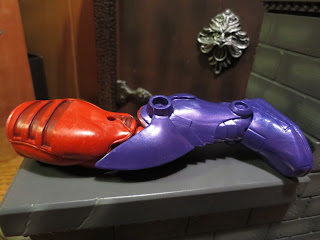 * I'm not planning on building the Red Skull as Onslaught figure but I'm still always in favor of the inclusion of build-a-figures in a series. 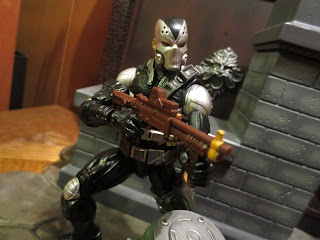 Despite not knowing who this guy is, he's still a darn awesome toy. I really like him. In fact, I'd go so far as to say Demolition Man is one of the best figures Hasbro has put out all year in the Marvel Legends line. He's well articulated, well accessorized, and just plain fun to play with. Do you know who this guy is? If so, leave me a comment! I'm really curious and I feel like the more wikis on him I read the more confused I get!

Have I reviewed any other figures of Demolition Man/ Scourge/ whoever the heck this guy is? I don't think so. I have reviewed plenty of other Marvel Legends figures, though, including: