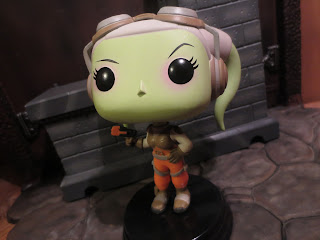 Want to know one of my biggest freak out moments during Rogue One? When you hear someone page General Syndulla over the intercom at the Rebel base on Yavin IV. That was so darn amazing! As a huge Rebels fan, I'm pretty inclined to pick up Rebels toys and whatnot, so I was really excited for Hera. As the captain of the Ghost and the person with the most connections to the Rebellion in the first season, she's the de facto leader of a group that really doesn't seem to care much for hierarchy. Let's take a look at Hera Syndulla after the break... 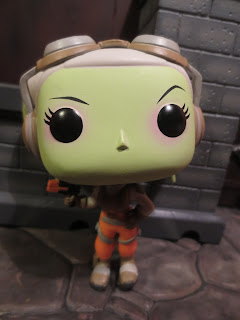 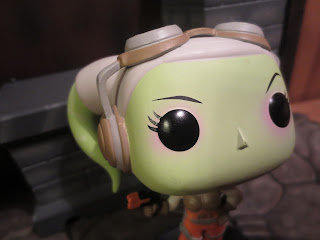 
* Hera has an incredible sculpt. I love the light green skin, the pink around her eyes, and the cool look of her pilot's cap. Her Lekku are also really well done (although they do cause problems) and they look just perfect. 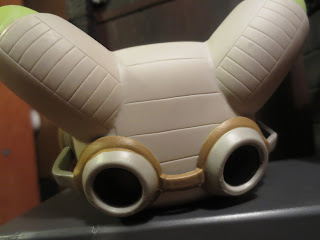 * Here's a top down view so you can see the great texture of Hera's pilot's cap and her goggles. The goggles look like they're movable, but they're not. Just a separate part of the sculpt that's permanently attached. 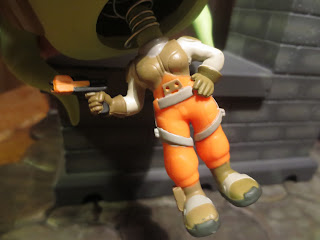 * Like most of the Star Wars POP! vinyls, Hera has a pretty cool sculpt. I love her pilot's outfit that she wears. It's just so cool and functional. I'm also digging the Blurrg-1120 holdout blaster she's wielding. She looks every bit the confident and capable pilot you'd expect in the Star Wars Universe with a somewhat cocky pose. I'm loving it! 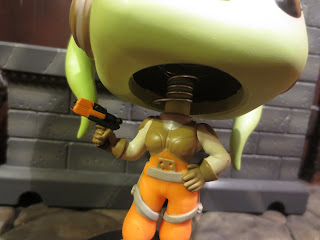 * So... Hera's lekku are really heavy. So heavy, in fact, that they cause her head to permanently tilt back, revealing her neck spring. Remember that the Star Wars POP! vinyls are technically bobbleheads (probably to get around a licensing agreement that Hasbro has with Lucasfilm/ Disney) and this is an area where the bobblehead feature definitely is a detriment. She looks awkward on display. 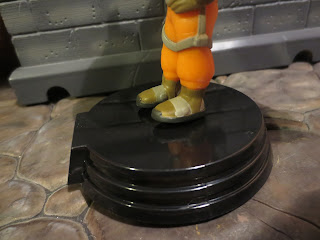 * Here's another example of the problems the heavy Lekku cause: Not only does it cause cosmetic problems, but it causes the figure to lean back quite a bit. My Hera looks like she's leaning back on her ankles and about to tip over. Definitely a big failure for a toy who literally is just supposed to stand on a shelf and look cool. 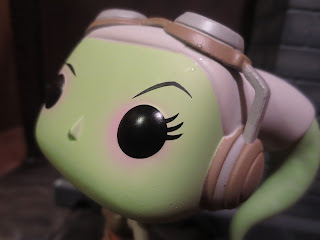 Hera can still stand, so she's not defective, but the weight of her lekku definitely hinders the appearance and stability of the figure. That's a real shame, too, because Hera is an incredible POP! vinyl in terms of sculpt and paint. I'd love to see Funko take another swing at her (maybe with her A-Wing pilot's helmet on) and try re-balancing the weight of her lekku to better help the figure's posture. As it stands, she's sadly an Eh and a 1/2 vinyl. She's so important to the Rebels crew and looks great, but she's abslutely flawed.