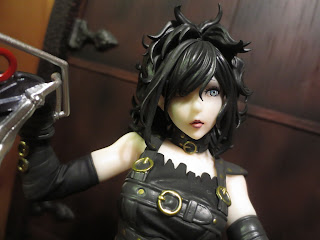 I'm wrapping up my 2016 purchases and today I'm looking at a statue that Kotobukiya got out the door at the very end of the year: Edward Scissorhands from their Horror Bishoujo collection. The first thing you'll notice about this is that this totally isn't a statue depicting Johnny Depp as Edward Scissorhands; instead, it's a female version of Edward Scissorhands. There has been a long tradition of female cosplayers putting their own touch on the Edward Scissorhands character, as well Halloween costume companies putting out feminine variations of the costume, so Kotobukiya definitely isn't doing something new here. Still, it's an interesting choice for this line which thus far has only included female versions of Freddy Krueger and Jason Voorhees. I managed to pick this statue up shortly after Christmas at a fairly discounted at a comic book store, so I was pretty pleased. Let's take a closer look at a cool new statue from Kotobukiya, shall we? More details and pictures after the break... 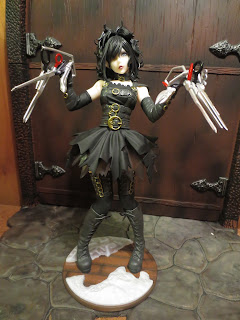 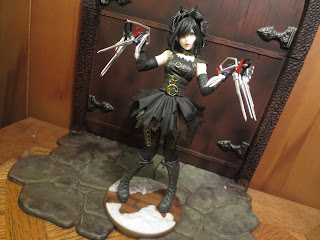 * I'm very interested in the pose that was chosen here. It's not extremely dynamic, but the bend in the figure's legs definitely helps to convey the stiff awkwardness of the Edward Scissorhands character. Based on a design by Shunya Yamashita, it seems that Yamashita's pose was inspired by this pose. 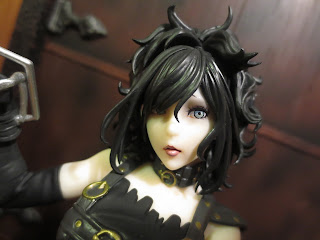 * It feels weird to call this figure Edward, doesn't it? How about I call her Miss Scissorhands? Anyways, Miss Scissorhands is just gorgeous. She has an extremely pretty face that very much captures an expression you would see from the film character. She has a wide eyes look that is somewhat curious but also cautiously guarded, too. Since her outfit differs a bit from movie Edward's, Miss Scissorhands is sporting a choker that matches the look of the other straps used on her costume. 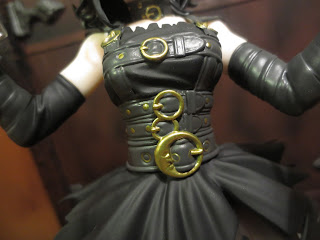 * I love how the dress is augmented with belt-like leather straps with gold ringed belt buckles. It's a cool way to capture the film's costume, even including the cool moon-shaped buckle on the waist strap. Kotobukiya always does such great work on their sculpting and the paint work is really quite neat and clean. 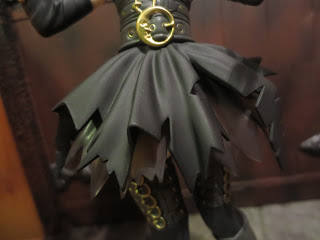 * The skirt is really cool, too. Not only is the out later sufficiently choppy and tattered but there is an under layer that's slightly more translucent. I guess maybe it's made of a lacy or sheer material? Fantastic stuff. Underneath that, if you really must know, Miss Scissorhands is wearing black and white striped underwear. There actually seems to be a lot of black and white striped Edwards Scissorhands merchandise, so this totally fits. 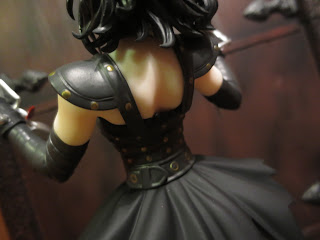 * Due to the way the arms and upper torso/head are assembled, the dress actually seems to have the effect of being an actual piece of material over the body. Am I explaining that clearly? The dress really and truly looks like a separate article from the body, thus giving an additional layer of depth to the sculpt. 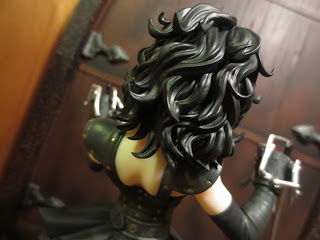 * Miss Scissorhands hair is just gorgeous, too. I feel like I'm probably repeating myself but the plastic Kotobukiya uses just works so well for fine details and strands of hair or material such as this. The sculpt is excellent and the design has a great wild, unkempt look to it; it's a great rendition of Depp's hair in the role as a feminine style. 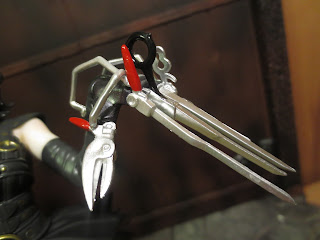 * The scissor hands, the defining feature of this character, are really well done. There are all kinds if different sharp cutting devices on there and they look fantastic. The silver paint for the blades looks great and the various handles and such are all extremely neat and clean. Top notch work. Of course, that's only the first compliment I have for these... 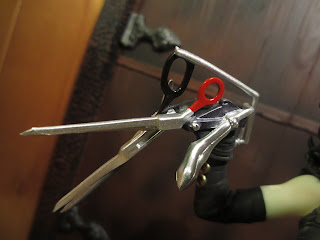 * Secondly, can I just say that it's incredible how perfectly these scissor hands turned out? Can you imagine a traditional statue made of any other material arriving without these small pieces broken or chipped? These aren't even the least bit bent. Kotobukiya manufactures some exceptional products and they also package them very safely (without needing a ton of packaging materials). I really think very highly of the quality of their work. 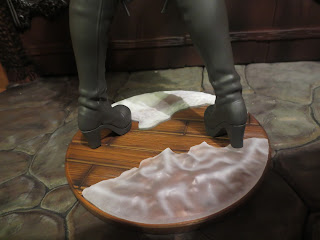 * Miss Scissorhands has a somewhat simple but really nicely rendered base. It's a simple disc that looks like aged wooden planks covered with a bit of snow in the front and a bit of ice in the rear. The ice is lightly translucent with some nice paintwork to give it a frosty look. She's firmly attached to the base via screws which works extremely well. I'm so glad they didn't try to go with a magnetic base like the Jason and Freddy Bishoujos; those just didn't work well at all. 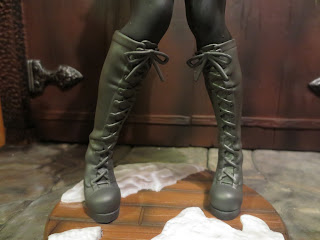 * Edward Scissorhands' boots are fairly elaborate with lots of buckles and such. Miss Scissorhands' are much less elaborate, featuring only laces. They're also simply molded in grey plastic with no paint on the laces or other details, which kind if makes them seem a but dull compared to everything else on the figure. 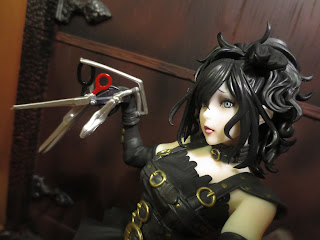 This is a really Great statue. While Miss Scissorhands doesn't have any extra swappable pieces like some Kotobukiya releases have included lately, the statue herself is pretty incredible. Beautiful paint and sculpt just bring everything together so nicely. While these aren't "cheap," for the price they're far better than most statues you'd find at more expensive prices. Edward Scissorhands is definitely my favorite figure from the Horror Bishoujo line thus far and is a strong reinterpretation of the character. Heck, if the movie ever gets remade (which, let's be honest, it's going to be remade at some point), this would be a pretty interesting direction to go in.


This is actually the first Edward Scissorhands item I've reviewed on the site. I own the older McFarlane Movie Maniacs figure, along with a set of the Mez-Itz, but I've never reviewed any of them on here. Maybe one of them will make it into 31 Days of Toy Terror this year.
Posted by Barbecue17 at 1/16/2017