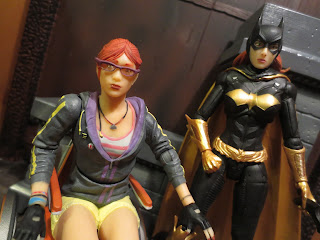 I have three items from 2016 left to review before I start releasing my best of the year lists: The One:12 Collective BvS Batman, the DC Icons Batgirl, and the Arkham Knight Batgirl & Oracle two-pack. Today I'm looking at the Batgirl & Oracle two-pack and, as you can probably guess, I've been pretty excited for this one. Since Barbara Gordon/ Batgirl is my second favorite DC Comics character (Batman still comes first), this pack just seemed like it had my name written all over it. While the Batgirl design from the Arkham Knight expansion "A Matter of Family" doesn't differ much from the New 52 version of the character, the fact that we're getting Babs as Oracle is huge. It's been almost 15 years since DC Direct released the Birds of Prey set with an Oracle figure, and now that figure commands some insane prices. This set is cool as it captures both of Barbara's crime-fighting identities in one set. Is it as good as it seems on paper? Let's take a closer look and find out... 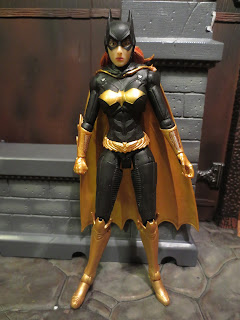 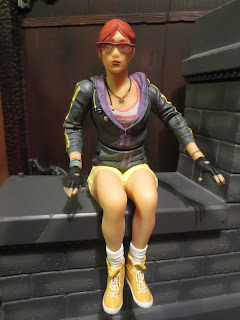 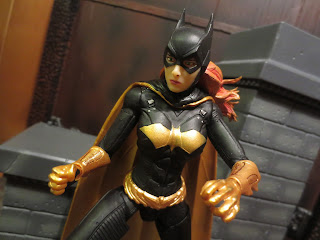 * At least from the waist up, Batgirl has some pretty solid articulation. The Arkham Knight figures definitely improved the articulation over the figures from previous installments in the series with a wider range of motion. 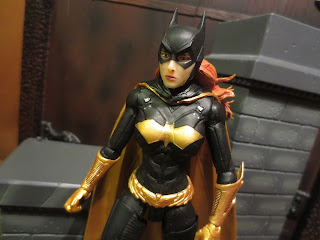 * The armored bits and general shape of the body are very impressive. Sometimes the sculpts on these figures, done by Gentle Giant, look really soft. This one isn't though, and the armor, belt, boots, gloves, and even how the cape "attaches" to the chest plate all look phenomenal. The paintwork is sharp, too. The black and the gold look perfect together with little to no paint bleed. That's not something you always get when mixing black and yellow. 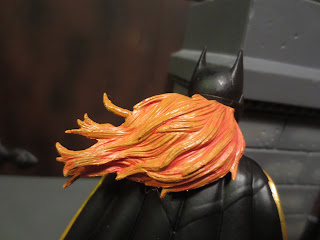 * The flowing hair looks really nice. It actually has a drybrushing effect that gives it some added depth, too. Love it! 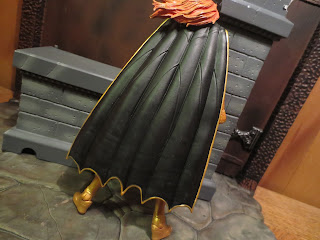 * Batgirl's cape is made from a softer, semi-pliable material. The black and gold look really together. I'm also really liking the fine details etched into the cape. It makes for a rather interesting appearance. 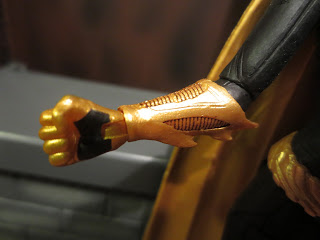 * There really is some excellent sculpting on Batgirl's armor. The gloves are a great example as they look really nice with some clean, sharp edges and a nice dark wash. I also dig the padding on the palms of her gloves. 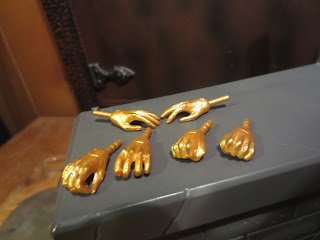 * Batigrl comes with three pairs of interchangeable hands which swap out easily and feature really sturdy pegs. There are two open palms, two fists, and two gripping hands for the included batarang. Speaking of which... 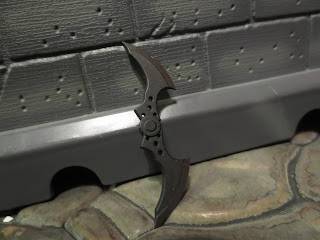 * To help fight crime, Batgirl comes with a really nice batarang. It's a rather sharp sculpt and features a painted edge to make it looks extra shiny and lethal! Well, not lethal, as Babs isn't going to kill anyone with it. How about extra menacing? Yeah, let's go with menacing. Batgirl totally does menacing. 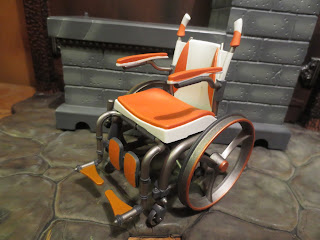 * Oracle's wheelchair is fantastic and definitely stands out as one of the most impressive accessories of 2016. It's definitely a bit nicer than the standard wheelchair you might expect and seems much more tailored for someone who is a younger, active wheelchair user rather than someone being pushed around at the hospital. The paint work is nice and, thanks to metal axles, all of the wheels actually roll quite securely. 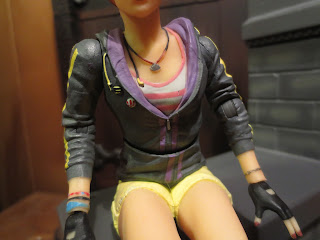 * Babs' body sculpt is really quite nice. I love the paintwork and the sculpted details on her outfit. There are quite a few little extras such as a necklace with a small pendant, an earbud hanging over her shoulder, a variety of bracelets on her right wrist, and some buttons on the right side of her hoodie. 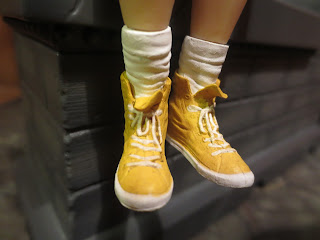 * I love Barbara's pink Chucks. Not only does the yellow tie in with her traditional yellow boots but they just look super cute on her. The sculpt and paint is excellent, too. 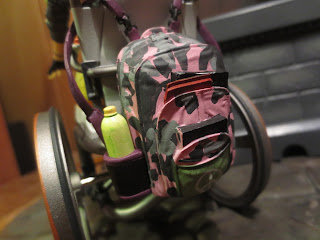 * Oracle comes with a really cool backpack accessory. The straps are sculpted to fit over the handles of the wheelchair and it looks great there (although it will tip the chair if Babs isn't sitting in it; it's pretty heavy). The paintwork is great and you can see a couple of books, a water bottle, and what might be a tablet hanging out of the various pockets. Oh, and there's a peace sign patch on the back pocket as well. 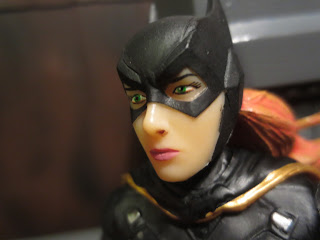 * I'm not sure that I'm overly thrilled with Batgirl's face. This just doesn't look like the representation of the character from Arkham Knight, nor does it look like the Oracle figure from this set. It just looks off somehow, which is a shame as the mask and eyes are impressive. I think something else that makes this figure look odd are the painted nostrils. It's not something you see in figures in this scale and it just doesn't seem very subtle. 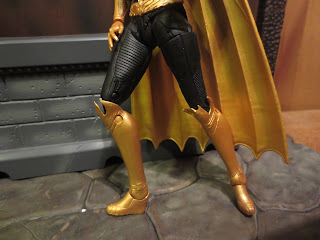 * Batgirl's lower legs feel really, really loose and it's tough to keep her standing. The articulation scheme is excellent, with double jointed knees and swivel/hinge ankles, but everything just feels a bit shaky. 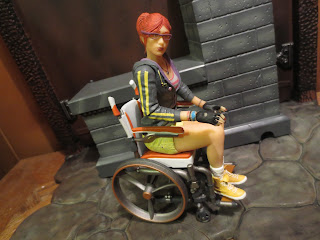 * As a wheelchair user, it's really important that Barbara fits well in her wheelchair. Sadly, that's not the case. She doesn't "attach" to it or anything, nor does her articulation really keep her in the chair very well. She really is just kind of balancing on here. The figure is largely pre-sculpted (I'll get to that in a minute) and this makes it nearly impossible to make Babs look natural in her wheelchair. I have to say that I'm kind of disappointed. 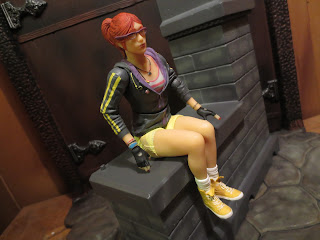 * While Babs has pretty standard articulation from the mid-torso up, I'm a bit upset that DC Collectibles didn't give the figure any articulation in her legs. While I know this incarnation of Barbara Gordon is paralyzed from the waist down, not every incarnation of the character is. Since we've never just received a plain Barbara Gordon figure, this could have served both purposes. Even simple hinged knees and hips would have been welcome. 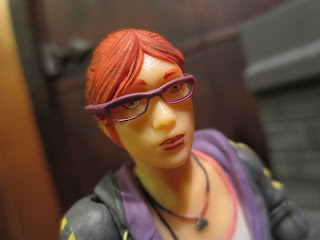 * I feel like I'm complaining a lot here, but I don't think Oracle bears a good resemblance to her in-game counterpart, either. It's better than the Batgirl headsculpt, and the glasses are well done, but it just feels rather likeness and plain. In 2015 DC Collectibles was knocking these figures out of the park. What happened? 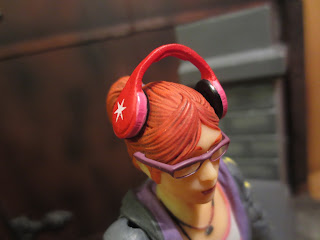 * I like Babs' headphones. They're bright red and definitely kind of funky, fitting her personality. Sadly, there is no way they're fitting on her head. What's the point of giving her headphones that she can't wear? That's kind of an odd accessory choice, especially considering that something more important is missing... 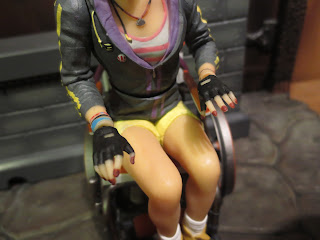 * Where is Oracle's laptop? Seriously, Oracle's main gig is that she's a computer whiz skilled in doing pretty much anything that involves computers. She's a hacker. She coordinates the Batfamily and gets them the data and information they need when they need it. Why the heck doesn't she have a computer? Her hands even look like they're posed to type. 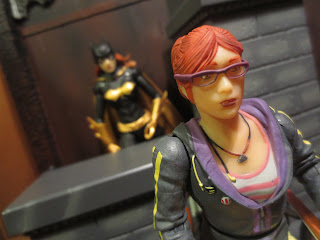 While I'm thrilled to get Oracle, I really feel that DC Collectibles botched this set. The likenesses just aren't there (I mean, the figures don't even look alike and they're the same character) and they have an odd, lifeless look to them. Factor in the bizarre way Oracle can't really sit well in her wheelchair, the lack of any leg articulation for her, and her lack of a computer, and I think this is ultimately a pretty disappointing set. Considering that you're getting two figures that both have some issues, I think this one ends up being a rather Eh and a 1/2 set. I had really high hopes for this one and, sadly, I was let down.