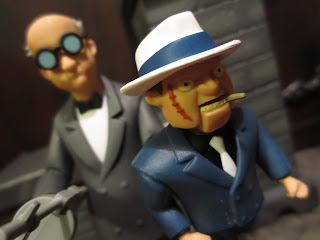 I do like DC Collectibles' excellent Batman: The Animated Series line, but I just haven't been buying many of them because the style is pretty different compared to most other DC lines. Still, now that they're really getting into some more unusual characters, I'm picking up some more figures from them. For Christmas I received one I was eagerly anticipating. Well, two maybe: Ventriloquist & Scarface. While Arnold Wesker seems pretty mild mannered, as the Ventriloquist he uses the puppet Scarface to bring out his dark and vindictive side. The team had quite a few appearances on Batman: The Animated Series, so it's pretty cool to now have them in this scale. While the Arkham Asylum line included a Scarface with the Joker, this is the first Ventriloquist we've ever seen in the 6-7 inch scale. Ready for a closer look? Then join me after the break... 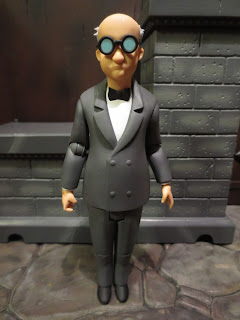 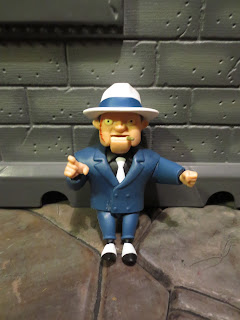 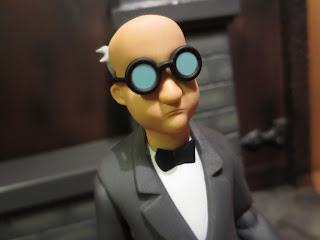 * I love the headsculpt. Again, DC Collectibles' Irene Matar just nails a character likeness. The glasses are a separate piece permanently attached to the head, and they beautifully capture the oversized, bottle lensed look of Arnold Wesker's spectacles. 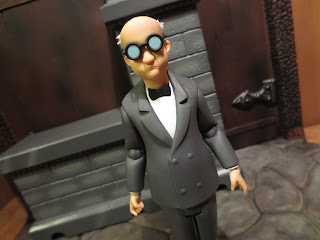 * The sculpt and paintwork on Arnold Wesker is incredible. The animated appearance of the character is captured perfectly here and the proportions look wonderful. Everything is neat and clean, fitting the style of the line. 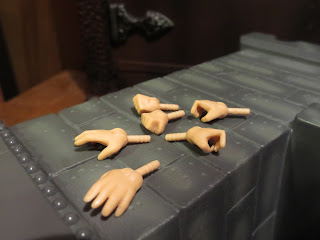 * Arnold comes with three sets of interchangeable hands: two fists, two grips, and two open palms. They swap out pretty easily and feel sturdy enough. Scarface himself is actually another "hand" for the Ventriloquist, but I'll get to that in a moment. 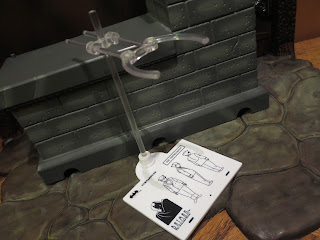 * Like every other figure in this series, the Ventriloquist comes with a display stand. It works fairly well for him and features some nice line art of the character at the bottom, along with the Batman: The Animated Series logo. I like the uniformity of these. 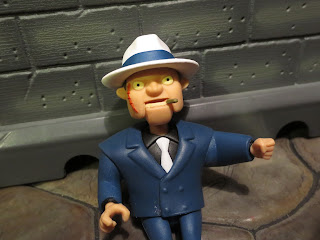 * Scarface looks incredible. The sculpt is perfect and captures all of the details you'd expect, down to the toothpick hanging out of his mouth (I'm pretty confident it's not a cigar, like in the comics), the old timey gangster suit, and the hideous scar on his right cheek. He's fairly articulated, although his legs do hang loosely to mimic the fact that (this version, anyways) Scarface is really just a ventriloquist's dummy. 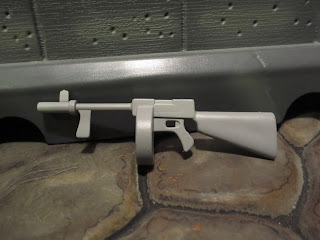 * The little tommy gun styled machine gun can either be wielded by Wesker or Scarface. It's a great little gun with a very specific style befitting the cartoon series' dark deco art style. 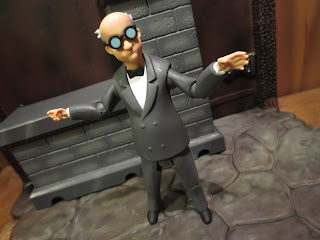 * The Ventriloquist's articulation is a bit different than most other figures in the line. This isn't much of a problem, as I don't expect this guy to need to be doing martial arts or anything, but his legs are definitely really restricted by his coat. Of course, that's not too much of an issue. He feels very sturdy and solid, more so than many other figures in the line. 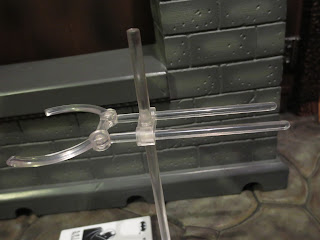 * I'm really not sure why, but DC Collectibles makes the clasp on the stands for these figures stand out a couple of inches behind the post. What this does, unfortunately, it make displaying these even harder. They're either poking the back of the shelf or other figures standing behind the one using the stand. They really need to shorten these. 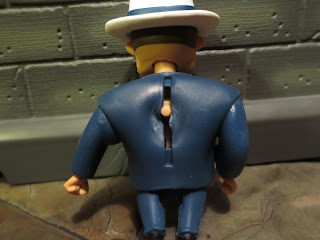 * To aid Ventriloquist in carrying Scarface, Scarface actually functions as a hand. See the flesh colored tab in his back? That's supposed to fit into the Ventriloquist's back. I say "supposed to" because it's really tough to get it to stay. Scarface's jacket is made from a soft rubber that should cover the inner workings when he's not being used by Arnold, but as you can see, his jacket is already starting to tear. Cool idea, poor execution. 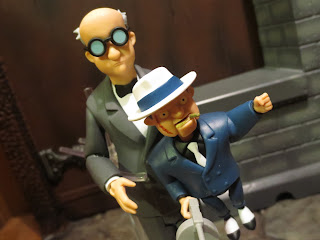 Despite those two problems, the Ventriloquist is a really good figure. It's very cool to have this character in a 6-7 inch scaled line, even if the Animated Series' style doesn't mesh with the style of most other 6-7 inch scaled DC lines. The sculpt on both figures here is just incredible, plus you get a few nice extras. This is a Good and a 1/2 figure so long as you take care in putting Scarface on the Ventriloquist's wrist.


I haven't reviewed any other figures of the Ventriloquist or Scarface on here but I have reviewed a few other Batman: The Animated Series figures from DC Collectibles, including: