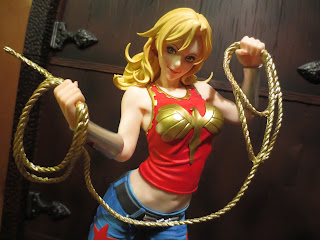 Kotobukiya has made their way through the most prominent female characters of the DC Universe in their DC Comics Bishoujo line and now they're starting to hit some more B-listers. I'm completely OK with that as I'm really looking to see their take on characters like Hawkgirl, Miss Martian, Vixen, Mera, Talia al Ghul, and others. The newest release they've put out is the Cassandra Sandsmark version of Wonder Girl. This isn't a character I'm terribly familiar with (I'm more familiar with the Donna Troy version), which I will admit probably has had an effect on my thoughts toward this statue. Still, Kotobukiya's statues are usually so impressive that I knew I was going to give it a chance. Plus, she'll display nicely alongside of Starfire and Raven if you're going for a Teen Titans display. These statues look incredible together and truly justify the expression "the more the merrier." Join me in taking a closer look after the break... 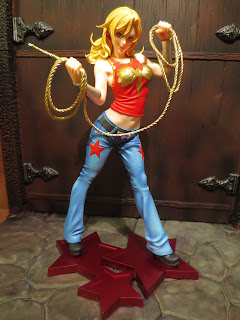 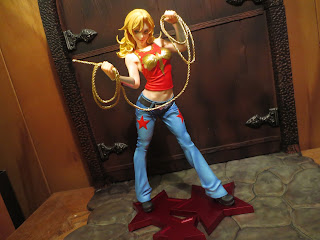 *  Based on artwork by Shunya Yamashita, the poses on these statues are usually pretty cool. Wonder Girl's isn't bad at all, and actually looks pretty good. She's taking a pretty bold stance with both feet on the ground, something you don't see in many of the Bishoujo statues, so it definitely seems to show that she's taking a stand. Of course, as always, the quality of the materials is excellent, too. I'm still pleased that Kotobukiya can create better statues at at least half the price of other companies. 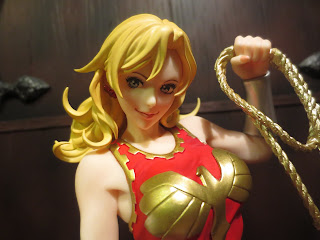 * Another consistent element of Kotobukiya's Bishoujo line is that the characters always have very pretty faces. Perhaps it's because of Shunya Yamashita's style, but the ladies always have heart shaped faces. Wonder Girl is no different, but her chin seems a bit more angular. She also has a very sly grin and a sideways glance that I kind of like, too. 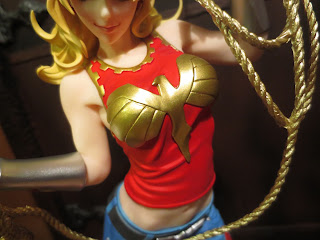 * Cassie's shirt is really cool. It looks, at first glance, like a simple red tank top. Look a bit closer, though, and you can see that the gold eagle is actually a piece of armor. Realistically, I'm not sure how that would work, but it looks cool and ties Wonder Girl in with the Armored Wonder Woman statue. 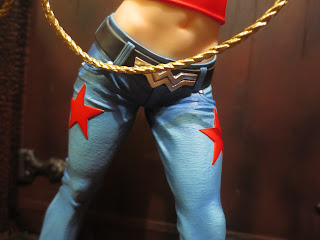 * Jeans aren't something you see to often on superheroes, so it's kind of a unique look for one of these figures. The denim sculpting and paintwork on these look really nice, as does the Wonder Woman inspired "WW" belt buckle; it has a very convincing metallic appearance. 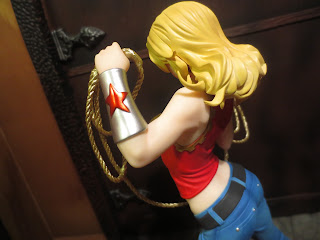 * In addition to her mystic lasso, Wonder Girl is also sporting some bracelets similar to Wonder Woman's. They have a great sculpt and the paintwork is really convincing. I love the metallic looking elements on this statue. There aren't a ton of them but they really stand out. 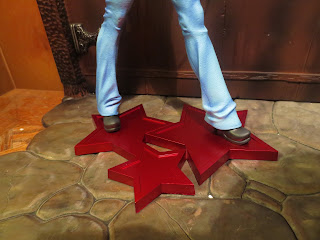 * The base is simple but it keeps the figure steady and it's character specific. I like the metallic appearance of the three red stars here. It looks great with the other colors of Cassie's outfit. She's permanently attached to the base, which is definitely for the best. 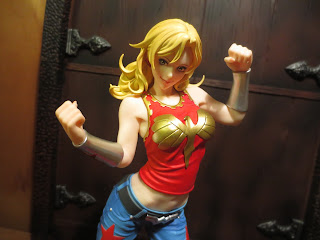 * One of the cool things about this statue is that if you remove the mystic lasso, the statue still looks pretty cool. Without the lasso, Cassie looks like she's in a pose where she's showing off her muscles and her powerful wrist bracers. It's always nice when you actually get a display option or two with a statue. Kotobukiya has been pretty good about that lately in the Bishoujo line. 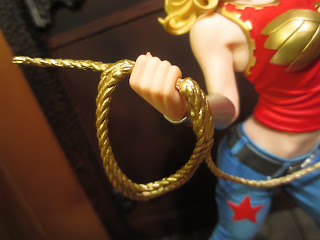 * For the most part I've experienced nothing but perfection from Kotobukiya's statues, but I had my first problem with Wonder Girl: Her mystic lasso wouldn't fit in her right hand. The lasso is a single piece that attaches to the both sides of Cassie's closed fists to sell the illusion of her holding it. One of the holes in her hand was just too small to allow insertion of the peg, though, so I had to use a tool to enlarge it. Kind of frustrating. 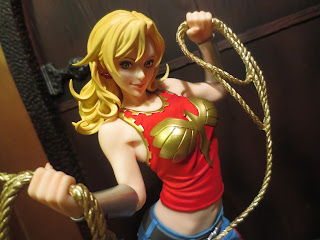 This line will probably end up somewhere on my best of 2016 lists (they're coming, they're coming!) and Wonder Girl does help to already get the line considered for 2017. She's not as impressive as many previous releases, though. Part of that is due to the statue itself while my being less familiar with the character probably brings her down a bit as well. For fans of the character, this is probably a massive "Must Buy." I like her, but she wouldn't be my first recommendation. She's a Good and a 1/2 statue and I don't think completests for this line will mind having her hanging around one bit.