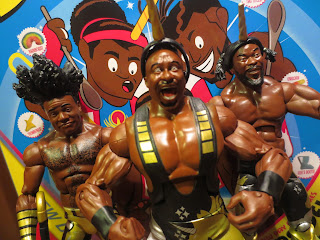 I'm down to only four items leftover from 2016 that I need to review, and one of those is this very cool set from Mattel's WWE Elite Series of action figures. It's the New Day Pack, featuring all three members of the New Day, the current longest reigning WWE Tag Team Champions (483 days), in their in-ring attire from Wrestlemania 32 when they faced three members of the League of Nations. This is a really cool set that I stumbled upon at Toys R Us about three days after Christmas and just had to pick up. Let's take a closer look at this one after the break... 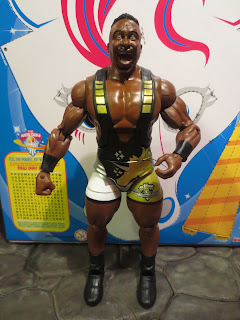 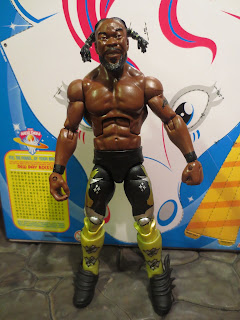 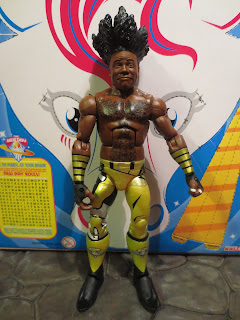 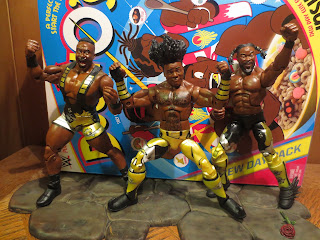 * All three figures in here have Mattel's Elite Series articulation, meaning they move well, feel extremely durable, and are tons of fun to play with. The articulation on WWE Elite figures probably is only surpassed by Hasbro's Marvel Legends figures when it comes to mass market toylines, so these are definitely fun figures to pose and display. 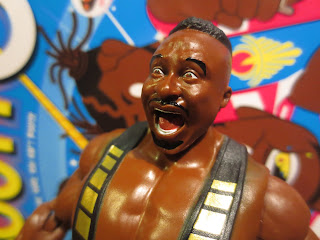 * This is an awesome Big E sculpt. Big E is one of the most expressive superstars in the WWE and he just has some downright incredible facial expressions. I'm actually a big fan of expressive headsculpts on wrestling figures (I know some collectors are not) so this just made my day when I saw it. 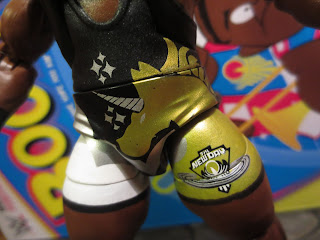 * Big E's wrestling garb has a great black, white, and gold pattern with a unicorn and the New Day logo on the left side. If you own any other unicorn themed wrestlers other than these guys, I'd love to know about it. 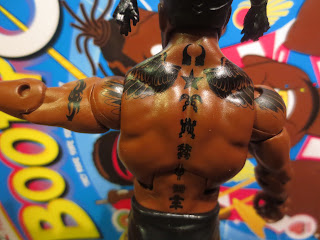 * Kofi's tattoos look great. They're really well defined and very intricate. The Elite line always does a good job on stuff like this, but it's still worth pointing out. 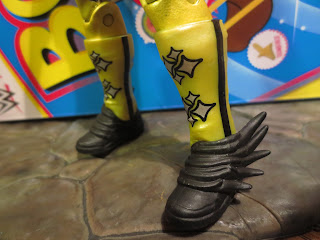 * Kofi came out sporting these great winged boots which Mattel has faithfully captured here. The printing is excellent on these figures (extremely neat paint apps) and the unique look of their outfits really helps them to jump off your shelf. 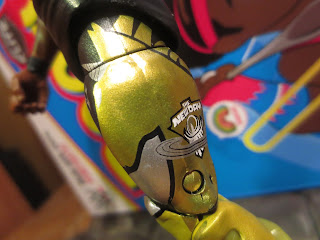 * Here's a close up of the unicorn printing and the New Day logo on Kofi's pants. Very nicely done! 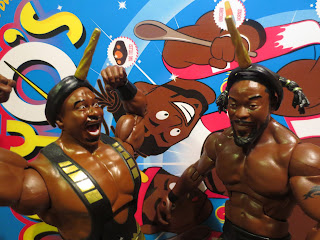 * The set also includes two unicorn horns, which is appropriate for their Wrestlemania 32 entrance. My picture to the right is incorrect, as Xavier and Kofi wore the horns at Wrestlemania, but you can still see that they work and look pretty cool. You know, as cool as fake unicorns look. Yeah, they're a bit goofy, but that's kind of the point. C'mon, Action Figure Barbecue readers: Don't you dare be sour! 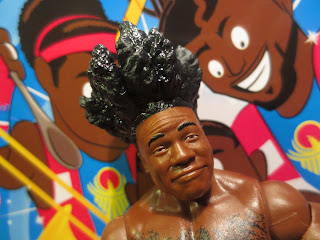 * This is an incredible Xavier Woods headsculpt. I love the facial expression and the hair. This is way better than the portrait on the series 42 Elite figure. 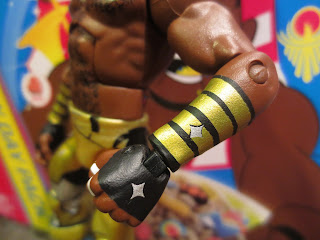 * Xavier Woods has some cool details on his gloves and wrist wraps. I'm digging the gold and black color scheme used here. 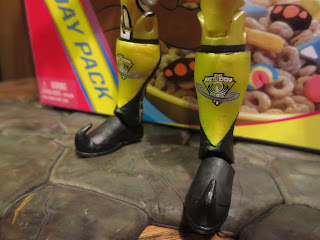 * Xavier's boots were awesome at WrestleMania 32. Not only did he have some cool New Day logos on them, but they had these crazy curls on top. Like elf shoes, or something out of Aladdin. 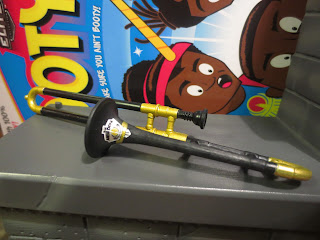 * Francesca II looks incredible! She seems to be the same sculpt as the version included with the series 42 Xavier Woods, but she feels much sturdier. Of course, the paint job is also really, really nice. I love the black and gold and the New Day logo on her bell. 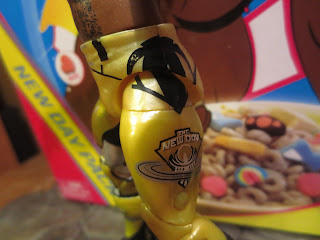 * Kofi's got some great printing on his pants, too. I'm always very impressed by how neatly Mattel can print these tiny logos. 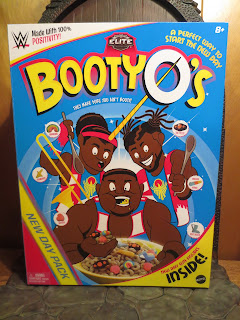 * Let's talk about the packaging: At Wrestlemania 32 the New Days showed up in a giant box of Booty O's, so Mattel has chosen to pack these guys in a box that resembles Booty O's. I actually have a box I picked up at a showing of SmackDown last spring and this one is pretty similar, although a bit larger and with the "New Day Pack" and Mattel logo on the bottom. Heck, this kind of counts as both an accessory (since the guys did use one in their entrance, and the box scales pretty well for them) and as a prop replica (since boxes of Booty O's have shown up on WWE). This is a great extra and some incredible packaging! 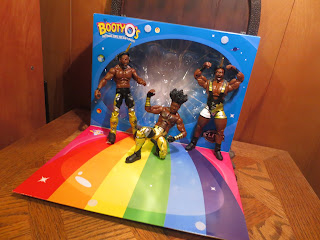 * A Velcro flap on the front of the box opens up to reveal the trio of wrestlers inside. I don't usually talk about packaging much but, when it's this cool and fits in with the toys so well, I just have to. This makes a great place to display the greatest tag team ever! 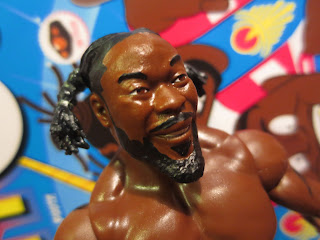 * There are definitely some good elements to Kofi's headsculpt, but something about his chin and the beard makes it look like he has an old-school Joker chin.  It's just a bit off... 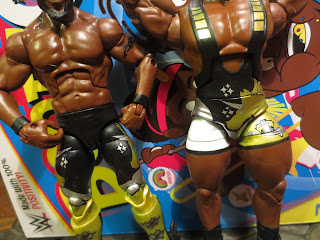 * Notice something missing? These guys don't come with their Tag Team Championship belts! Why in the world would Mattel not give the New Day, the longest reigning tag team champions in the WWE (who were still in the middle of that historic reign at this point) their titles? It's been a couple of years now since the belts were available in the Elite Series, so this should have been a given. 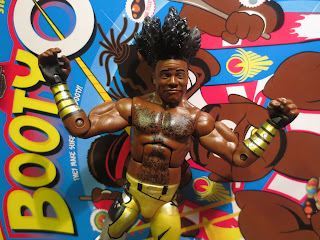 * The second thing missing from this set is the Dragon Ball Z inspired armor that the New Day wore when they showed up in the giant box of Booty O's. Why in the world did Mattel not include this? Honestly, that armor alone would have made this set unstoppable. That was such a memorable moment and I can't believe Mattel neglected to completely capture it. 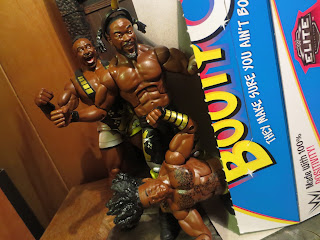 This is definitely a really cool set packed with three really nice figures. I have to admit, though, that I'm left feeling a bit sour that Mattel included neither the Tag Team Championship straps nor the entrance armored vests. If these has just been released as standard Elite figures,  I think Kofi and Big E would have definitely felt pretty light. There are some great newly sculpted elements here, but the missing parts are still felt. This should have been an Epic release filled with positivity. It's still a Great and a 1/2 one, though.


I have reviewed a few other New Day figures including the series 42 Elite Xavier Woods and the Battle Pack with Big E and Kofi Kingston.  For more Elite reviews from Mattel, check out the following: