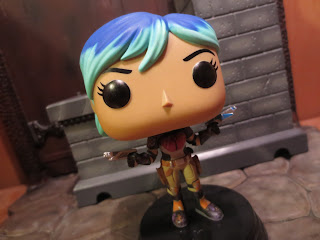 Today is the penultimate toy from my 2016 Christmas haul and it's another POP! from Funko's Star Wars offerings. Hailing from Star Wars: Rebels is Sabine Wren! Sabine was released with her Mandalorian helmet in November as a Walgreen's exclusive, but this unmasked version is the standard release. I haven't been able to watch Season 3 of Rebels yet (I'm probably going to break down and order the episodes through an online streaming service before too long rather than wait for the Blu-Ray release) but I'm hearing nothing from good things about this latest season. Sabine is definitely one of my top favorite Rebels characters and I'm glad to have her as part of my POP! Rebels collection. Let's take a closer look at her after the break... 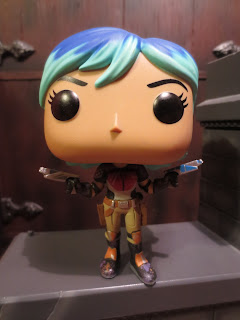 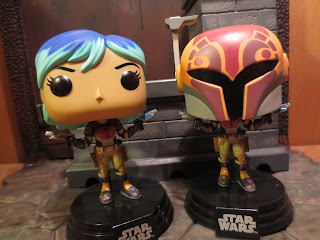 * This version of Sabine actually was released after the variant, which was exclusive to the Walgreen's exclusive. The bodies are identical (the weathering on the boots and knee pads does differ a bit), so the heads are the only difference. For more detail on the body, check out my review of the helmeted Sabine POP! vinyl. 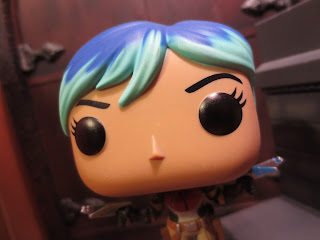 * I love the look of Sabine. I'm not sure her face really looks any different from any other POP! female, but I kind of think it does. Something about the way Funko composes POP! vinyls really tricks the mind into believing that you're seeing a pretty good, stylized likeness. Her hais is really impressive, by the way. 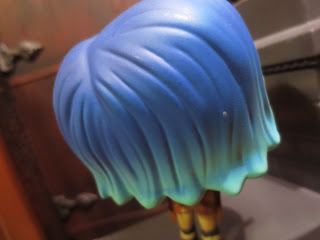 * I really, really like how Funko handled Sabine's funky hair. They did a great job in capturing the multiple shades of blue and having those shades fade into one another. 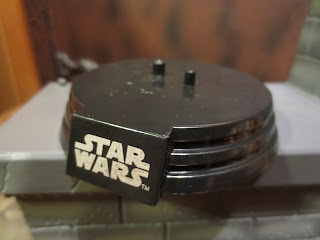 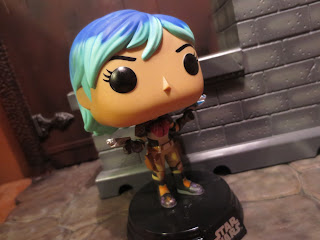 Sabine may very well be one of my favorite POP! vinyls out there. She has a great sculpt, some excellent paintwork, including the unique weathering on her armored pads and the paint spray on her boots, and fantastic hair. Comparing her to other POP! vinyls out there, I think she's definitely quite Epic. Heck, I like her better than the helmeted version. I'm looking to complete the Rebels team in POP! form and this figure gets me a but closer to that goal.

If you're a fan of the character, know that I've reviewed a few other Sabine toys on here so far: The two pack of season one Sabine Wren and a Stormtrooper and the single carded season 2 Sabine Wren from Hasbro's 1/18th scaled line, the Black Series Sabine Wren, and the Walgreen's exclusive Sabine [Helmeted] POP!. For more POP! Star Wars figures, check out the following: