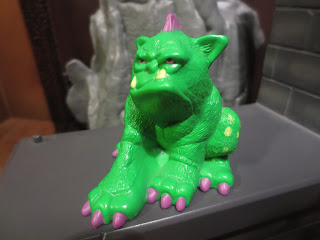 I'm still trying to finish my collection of Trash Bag Bunch figures (7 are still eluding me) and I'm making it a goal for 2017 to finish this set! I'm happy to say that I recently added one of the figures I've been trying to snag for quite some time, though: Garbeast. It's really interesting how diverse the Trash Bag Bunch can be; if you didn't know the figures available in the series, I'm not sure that you would be able to recognize that these little figures all go together. I picked this guy up from a small lot of minis that included two figures I already owned, but the price was pretty low so I bit (if anyone needs an extra Junkor or Wastor, let me know!). Let's take a look at Garbeast after the break... 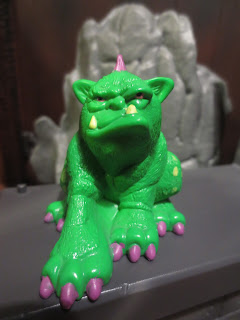 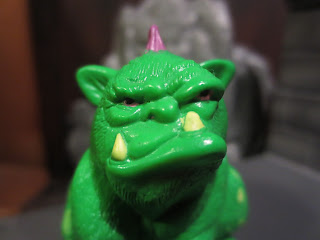 * Does this minifigure have about the best facial expression ever or what? He looks like Crinjer if he grew up, joined a street gang, and gained employment as a bouncer. You know he's sporting some ink underneath that green fur. 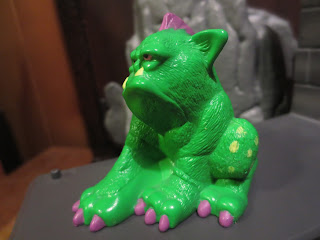 * The second thing I love about this guy is his posture. He just looks so cool. He's definitely dog-like, but in a way that's very different from Junk Jackal. This guy just seems a bit more like a giant mutant dog who probably really digs hanging out on the couch all day.

*Oh, and let me mention the glorious color scheme: Vibrant green fur, neon pink nails and a mohawk, and yellow spots? This guy has it going on. If Lisa Frank owned a bulldog, this is probably what he'd look like. I've been kind of writing some fan-fiction styled bios for the Trash Bag Bunch universe, so here's my take on the Epic Garbeast:  "While Professor Garboff is secretly in charge of the Trashors (with Muck Master as the 'face' of the group), everyone knows that if you want something done you go to Garbeast. While he doesn't look all that bright and he just kind of sits around, seemingly doing nothing, Garbeast possess a keen intellect. Having earned the loyalty of the both the Stink Buzzards and the Junk Jackals, some even say that he fantasizes of leading his own faction of mutants."