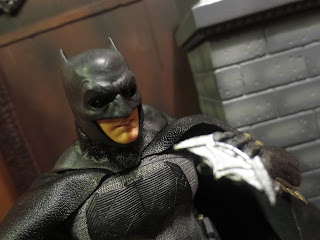 Today I'm looking at the One:12 Collective Batman from Mezco, and he's one of the last two figures from 2016 I'll be looking at before making my various lists for the best figures of 2016. Mezco's One:12 Collective seems to be a hit although they're experiencing a lot of delays. That hasn't seemed to hurt them much, though, as every figure they release is darn near perfect. Batman is my fifth figure in the range of products and, actually, he's my fourth Batman from them. What can I say? I love Batman. Ben Affleck's Batman is just incredible and, despite your feelings on the rest of the film, I think most fans appreciate what he has done and what he seems to be doing with the role. We're seeing some stuff we've never seen Batman do before, in essence getting a unique interpretation of the character that still feels true to what we've seen previously in a wide variety of source material. The Affleck Batsuit might be the best ever (yeah, that's hard for me to admit as someone who still loves Keaton's look). I've reviewed quite a few versions of this look from different companies, but let's take a look at the best version yet released. More Batfleck goodness after the break... 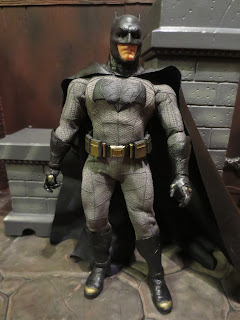 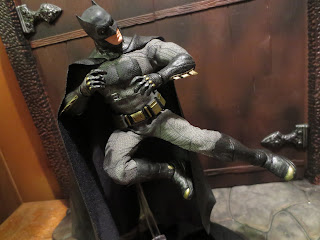 * I'm going to keep this brief: Mezco has created quite possibly the best articulation system on any action figure I've ever seen. Yeah, they don't have crazy stuff like toes and fingers and such, but the stuff that's there is necessary and works perfectly. They also feel very sturdy; far sturdier than the offerings from MAFEX, S.H. Figuarts, or Figma. These are just the best things on the market right now. 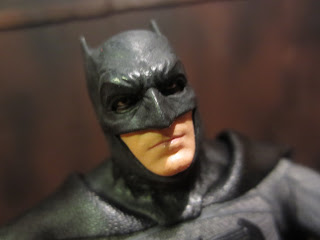 * Batman comes with two portraits that really do an incredible job of capturing Ben Affleck's likeness in the role. The first portrait is a fairly neutral expression. I'm very impressed by how this actually looks like a head in a cowl and not just a sculpted cowl with the face painted on. The eyes are just perfect, too. Very expressive. 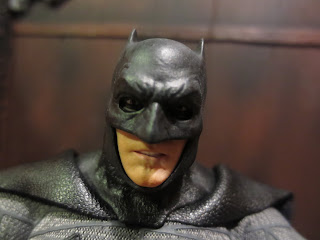 * The second portrait is even better: It's an extremely pissed off Bruce. This is the kind of Batman that is getting ready to brand someone (and yes, if you haven't seen the film, he actually does that. It's intense.) The heads swap perfectly and have a great range of motion. 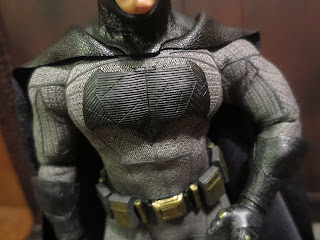 * The costume on this guy is just so darn perfect. The texture is incredible, as is the oversized bat on the chest. This is one of my favorite batsuits ever and Mezco has absolutely done it justice. The mixture of gray and black just looks perfect. 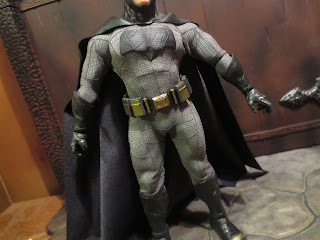 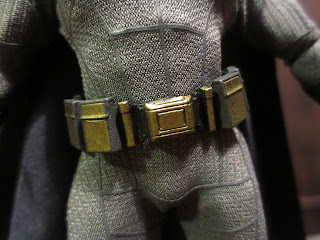 * The utility belt is really well done. I love the brass appearance of the metal parts of Batman's gear in this suit. The belt isn't removable but it is a separate piece that floats over the suit. It stays in place amazingly well, though. 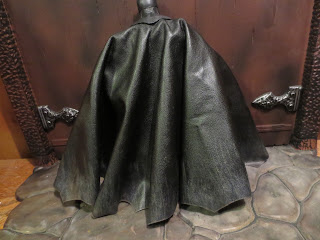 * The cape is also really good. It's very different than the cape on the Armored Batman figure. While that one was thick and made of a heavy fabric, this one has a lighter, almost leathery feel. It hangs perfectly and drapes well over Batman's body. It also has some wear and weathering on the lower hem that look fantastic. 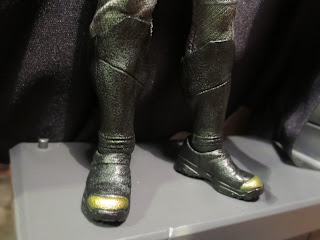 * The boots look great, don't they? Nicely weathered with some great paint work and sculpting to help them stand out from the bodysuit. 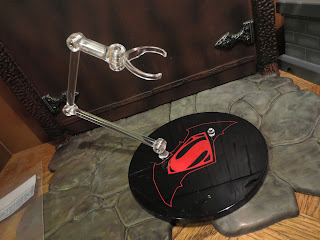 * Batman comes with a display stand that's exactly the same as the one that comes with the Armored Batman. It's a standard flat disc with the Batman/Superman logo on it, a clear peg that plugs into the figure's foot, and an articulated display arm that can be inserted where the peg is. You can get some great, secure poses here as the joints are very nice and tight on the display bar. 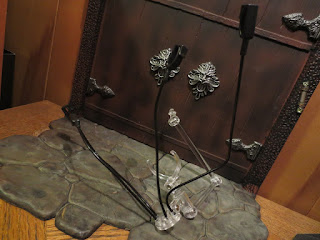 * Here's a quick picture of the action stand that can plug into the base (the foot peg is removable) to give Batman a bit of vertical display height and to give his cape some life. I'm not a huge fan of these, but I'm sure many collectors use them. It's actually seven separate pieces that fit together. 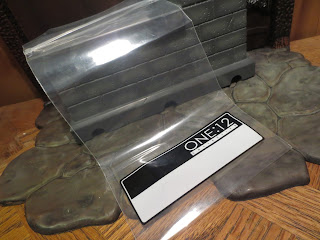 *  Mezco has been including these little plastic bags with the figures, and I kind of like them. I just received my first Figma figure, and they include bags like this as well, so maybe that's where Mezco got the idea. It's a great way to hold the hands, extra portrait, grenade, batarangs, and other little extras that you might want to use with the figure and swap out from time to time. 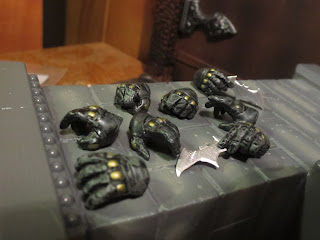 * Bats comes with 4 pairs of interchangeable hands that are designed to let him hold all of his included accessories. There is a pair of fists, a pair of somewhat open hands that can hold multiple batarangs, a right hand pistol grip, a left hand for the bat-brand, and two hands with permanently attached batarangs in a tossing pose. The hands swap easily and I don't have any concern about breakage as long as you're the least bit careful. The paint on the hands is exceptional, too. 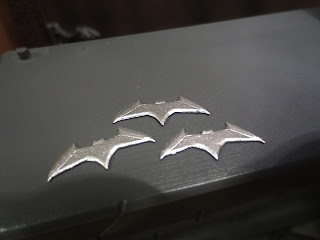 * In addition to the two batarangs permanently attached to the hands above, Bruce also comes with three additional batarangs. These are fairly small but the sculpt is excellent. The paint and thinness of the design actually makes these look like small, sharp slivers of metal. These might be the coolest batarangs ever seen in this scale. 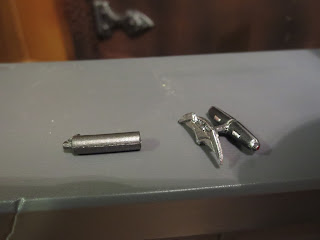 * Two more small accessories are included in the set: A smoke grenade and a brand. The smoke grenade has been seen with a few figures, such as Mattel's Suicide Squad version of this suit and Medicom's MAFEX version. The brand, though, is totally unique. I love it. It's such a wicked accessory but it fits the character of this version of Batman and it seems very movie accurate. It also fits perfectly in Bruce's left hand. 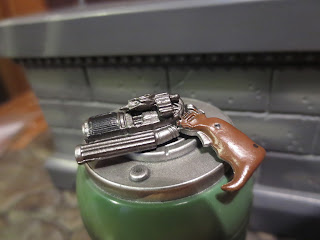 * The included Grapnel Blaster is gorgeous. I like it much better than the one included with the MAFEX figure, although that one was still fairly nice. The sculpt and paint are excellent here and Batman holds it perfectly with the pistol gripping right hand. 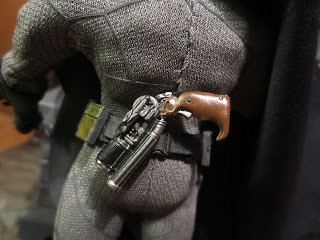 * There's actually a clip on the back of the utility belt that holds the Grapnel Blaster in place for storage. I didn't even notice this cool feature until I saw it in a review by Phantom Troublemaker of Needless Things. I love stuff like that! 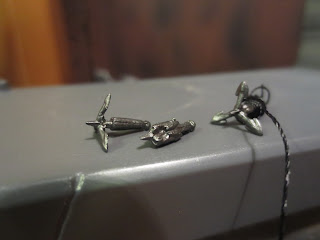 * The Grapnel Blaster comes with three darts: One that's closed, one that's folded open, and one that features a line. Any of the darts or the plug on the end of the rope can plug into the Grapnel Blaster's barrel for storage or display. 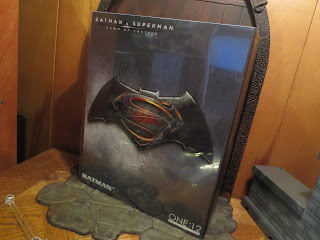 * Last, but not least, let me just say that the boxes on these continue to be fantastic. They're five panel boxes and they are 100% completely collector friendly. Everything stores perfectly and there are no twist ties or anything needed to keep everything in place. Plus, the design is rather nice with some great shots of the figure on the back. 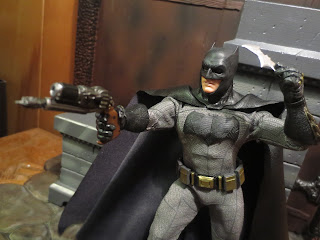 I really and truly don't have a single problem with this figure. It's incredible! I'm not sure I'd put him above the Previews Exclusive: DKR Batman, but he's darn close. He's still an Epic figure and, without a doubt, will end up on my best of 2016 lists. The sculpt, paint, articulation, accessories, and storage parts are all just perfect. I'm really hoping that Mezco continues to put out more great Batman releases in this series. Next year they have Deathstroke and Joker scheduled and we've seen a Harley Quinn, too, so hopefully this line continues to absolutely nail the residents of Gotham. Good job, Mezco. Good job.

I've reviewed so many Batman figures that the guy has his own review archive on Action Figure Barbecue. If you're looking for more reviews specifically of Ben Affleck's Batman in this costume, I've looked at the MAFEX Batman from Medicom and Mattel's DC Comics Multiverse Batman, the TRU exclusive Batman Unmasked, and the Suicide Squad Batman. If you're looking for more figures from One:12 Collective, check out the following reviews: