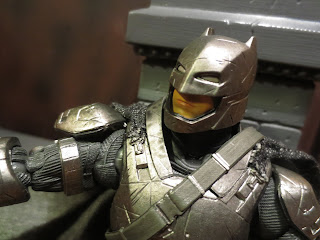 While it certainly wasn't one of the best movies of last year, 2016's Batman V. Superman: Dawn of Justice had some incredible costume designs, perhaps the most impressive being Batman's armored batsuit from his confrontation with Superman. Last January I picked up Mattel's version of Armored Batman from the DC Comics Multiverse line and as a belated birthday present I received Mezco's One:12 Collective Armored Batman. Despite having two versions of the costume, I was still drawn to Medicom's MAFEX version. It seems like MAFEX has some cool plans for this line and I wanted to go ahead and get an Armored Batman while they can still be found. You never know what toys are going to disappear and become harder to find, you know? Let's take a look at another Armored Batman figure after the break... 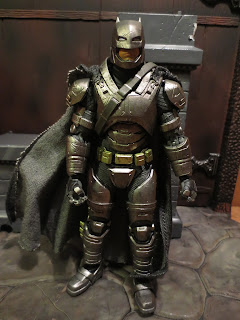 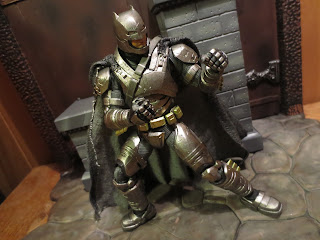 * Like the standard MAFEX Batman, armored Batman has some incredible articulation. Since he's a bit bulkier than the regular Bats, you can't fine tune his poses as much as the previous figure. Still, he's nothing to scoff at. Armored Batman feels quite durable for a collector's figure with an excessive amount of articulation. 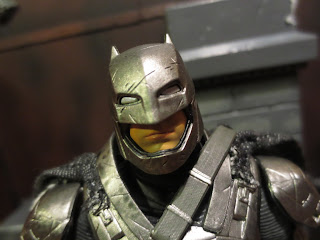 * Comparing this to Mattel's Multiverse and Mezco's One:12 Collective figures, I think this is the best portrait of Affleck in the Armored Batsuit in this scale. I don't own DC Collectibles' newest offering, so I can't say it's the definitive in this scale, but this is a darn nice portrait. It doesn't feature light up eyes or anything, but the paint and sculpt is impressive. It really looks like someone wearing a helmet rather than just a helmet with a painted on face. 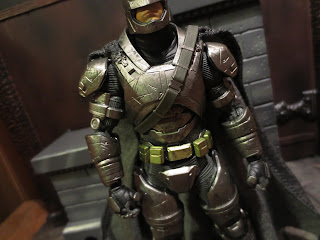 * Batman's armor looks incredible. Honestly, I think the suit looks better sculpted than it does as separate pieces like Mezco's version. The proportions are excellent and everything, from the dents in the armor to the texture of the body suit underneath, just show an incredible level of care and paint detail. I really think that, overall, this is the best looking Armored Batman figure out there. (I don't own DC Collectibles' version, though, but I'm not sure that figure offers anything really new to the mix). 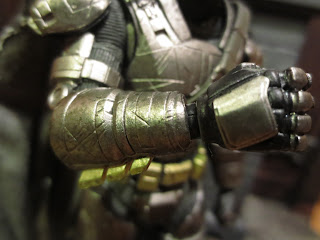 * Here's a close up look at Bruce's gauntlets. You can see that they already look pretty rough (has he beaten other people in this suit previously?) and have some great paint effects to make them appear metallic and rough. Also, his spikes are perfect. No warping at all! 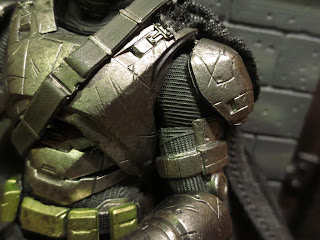 * The shoulder pads look great. I love the way the armor sets on the body on this figure. While they're separate pieces attached to the shoulder armor rather than the arms themselves, they just function perfectly. 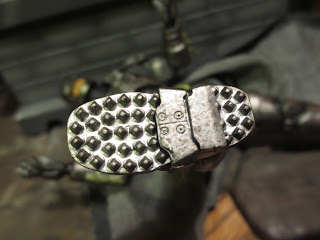 * I love the spiked soles of the armored batsuit and the MAFEX version does a fantastic job with them. Imagine getting pounded in the face with these bad boys? 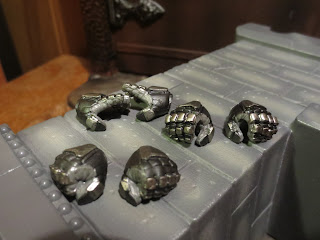 * Armored Batman only comes with three pairs of hands, but they still cover the main three things you'd want this guy to be able to do. Well, with the included accessories at least. Armored Bats has wicked looking fists, open palms, and gripping hands for his grappling hook gun. The pins are much thicker on his wrists than on the standard MAFEX Batman, so there's less fear of breakage. 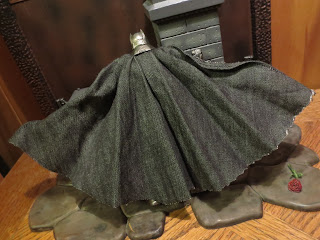 * I'm going to mention a complaint about the interior of the cape in a minute, but let me say that the exterior of the cape looks really impressive. There are also wires in the edges of the cape which help to aid in posing. It's incredible! I love the look of this figure and the function of the poseable cape. 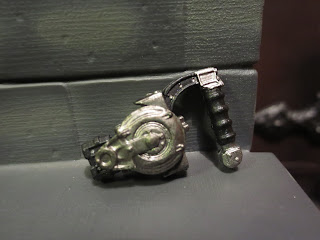 * Batman's lone actual accessory is the more heavy duty grapnel gun he uses during his fight with Superman. While it doesn't feature a removable dart like Mezco's version, it does have a pretty sweet paint job. 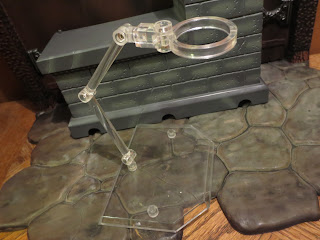 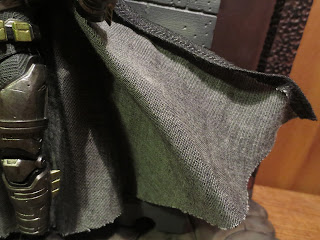 * I'm not digging the interior of the cape. It looks like...denim? Is that denim? The outside looks pretty cool, but the interior is pretty weak. This is an area where Mezco's One:12 Collective version takes the cake. 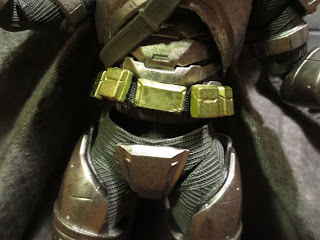 * Batman has a few places, particularly his waist, where the articulation definitely looks a bit odd. Unless you really lower his belt, you're going to be able to stare into Bruce's stomach and see the giant plastic peg keeping him together. Bummer. 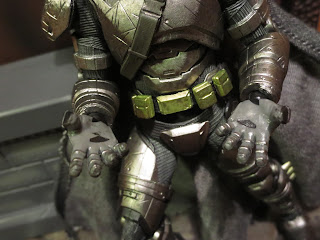 * Armored Batman feels a little empty handed compared to the standard Batman, doesn't he? He should have included the grenade launcher, too. And the kryptonite spear. This guy had plenty of accessories to choose from, so I have no idea why MAFEX didn't give him at least one or two more cool items. They're including a few more accessories with later figures in the line, but that seems unnecessary when this guy was packed so light. 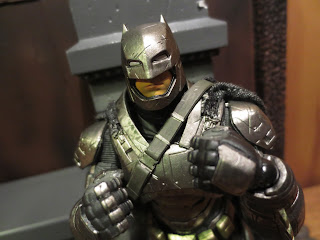 Armored Batman is a Great figure, and quite possibly my favorite Armored Batman I own, but he definitely feels a bit light compared to the other BvS Batman Medicom has released in the MAFEX range. The sculpt and articulation are hard to beat, though, and this guy is still a worthy addition to the collection. If you're buying one armored Batman figure, I have to say that I still think this is the best figure you'll find. Mezco's has better accessories, but this is the best sculpt.


If you're looking for more Batman figures, check out my Dark Knight archive for dozens of Batman reviews! For more DC Comics based figures from MAFEX, check out the following: