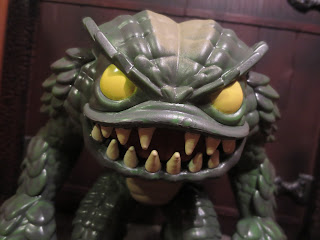 This is the first 2017 release I'm reviewing! Hooray!

As soon as I discovered that Funko was making Resident Evil POP! vinyls, I knew immediately that I'd be buying them all. I love Resident Evil. I have 7 preordered and paid for already. I'm planning to go see the Resident Evil: The Final Chapter. Heck, I've read the novels by S.D. Perry, won a costume contest dressed as Chris Redfield, and own the Alice Hot Toy (the only Hot Toy I own, in fact). I've been a fan of the game series and the Resident Evil universe since the summer of 1998 and I've been collecting Resident Evil toys just as long. No one has ever really released a collection that began to feel complete. Toy Biz stopped before Resident Evil 3: Nemesis. Palisades never got beyond a third series, and thus never got around to making a Jill Valentine. Moby Dick Toys never managed to make Leon. NECA has messed around with the license on a few occasions, but they've only released a handful of figures from different games, and never have made a Claire Redfield. Someone needs to do a comprehensive Resident Evil series featuring all of the main cast and, right now, my hope is with Funko. Can they do it? Let's hope so! The first release I picked up is the GameStop exclusive Hunter. I located and reserved him through my local store on GameStop's website and picked him up in store. Let's check out this B.O.W. after the break... 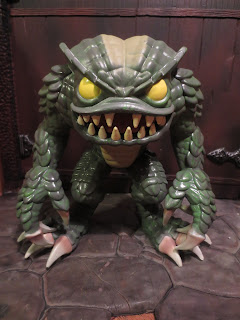 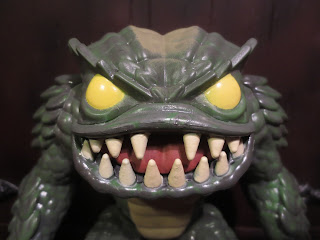 * "Hello! I am the Hunter and I'm going to kill you!"
This guy does look pretty menacing for a POP! vinyl, doesn't he? The soulless yellow eyes and odd ridges on his forehead, mixed with the sharp teeth, just make this guy seem rather fearsome. He's really a pretty cool little POP! with some great sculpting and paintwork. 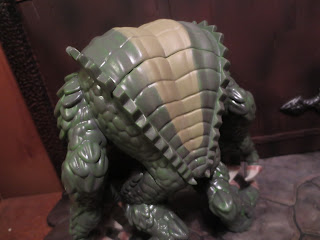 * This guy has a great sculpt all around, in fact. I like how he's positioned all hunched over, as that's the way that the alpha model Hunters walked around.

*  I like the mixture of paint colors, too. Some POP! vinyls can have pretty plain paint, but she shading really adds a nice bit of extra coolness to the Hunter. 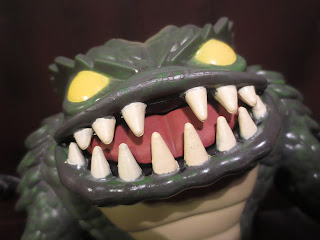 * I love how the Hunter's teeth are somewhat removed from it's mouth, giving the creature an even more three dimensional appearance. This is a really well done effect and adds to the creepy appearance. 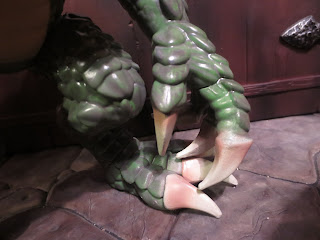 * Look at this guy's claws! They're excellent! Remember when this thing first showed up in Resident Evil? It just kind of walked in a door of the Spencer Mansion after a cut scene. It didn't seem that fast nor did it seem terribly large (it was kind of short, shorter than your player character). Of course, suddenly it leaped toward you and decapitated you. Instant kill. The original Resident Evil was hard core and, like Homey, it didn't play. It kicked you in the balls, stole your lunch money, and then proceeded to take your mother out for a nice seafood dinner. It also didn't ever call her again. 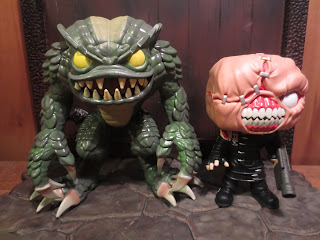 * I'm going to probably sound nitpicky here, but please here me out: The Hunter is too darn big! The Hunter is sold as one of the 6 inch POP! vinyls, but these guys are totally not really too large in the game. In fact, in both the original the the remake version of Resident Evil, these guys were actually shorter than the humans. I always thought that kind of make them creepier as they were small, brawny, and incredibly lethal (kind of like Wolverine). The Nemesis should have been a 6 inch figure and the Hunter should have been regular sized. 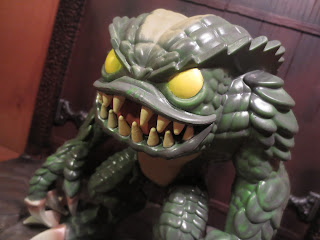 I have to admit that it was pretty thrilling picking up my first Resident Evil POP! vinyl. On it's own, I love the guy. He's got a fantastic sculpt that successfully blends the POP! aesthetic with in-game character model. Of course, I really am bothered by the fact that he's so large. This is clearly meant to be one of the Hunters from the original Resident Evil, and those monsters were just not that big. Had he been a normal sized POP! I certainly wouldn't worry, but considering that this line already seems to be using the 6 inch format to make bigger creatures (the Tyrant is a 6 inch POP!) this feels like a big misstep. He's a Good and a 1/2 POP!, but I'm hoping that future releases are scaled just a little bit better. It's weird to have this guy be noticeably, visibly taller than the Nemesis.

I have actually reviewed a few toys of the Hunter on here. I've reviewed NECA's Hunter from their Resident Evil: 10th Anniversary Collection and the Hunter & Chimera 2-pack from Toy Biz's Video Game Superstars line. I haven't reviewed any other Resident Evil POP! vinyls, but they're coming!
Posted by Barbecue17 at 1/17/2017